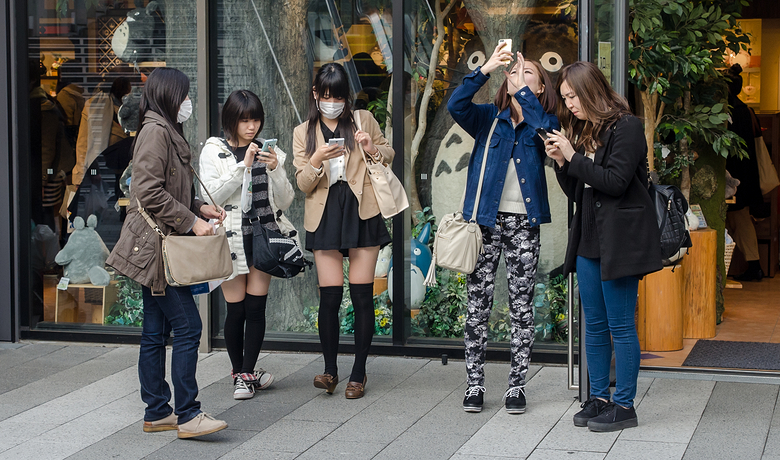 Snapchat in Japan – Opportunities and Challenges

There is no doubt that Snapchat has already become one of the most prominent social media applications of our time. As a matter fact, Bloomberg has reported that Snapchat’s Daily Active Users outnumbered that of Twitter in June 2016, with 150 million daily users.

In Japan, Snapchat is still a newcomer, and it is overwhelmed by the popularity of Twitter and LINE. Here are a few opportunities and challenges I think Snapchat may face in its path to popularity in Japan, and things businesses may need to know when considering a Snapchat campaign for Japanese users.

Snapchat and the Humor of Japanese Digital Natives

Snapchat is mostly used by the younger generation (60% of total users are under 24 years old). Without exception, Japanese teenage digital natives are so active on social media that they’ve produced high school Vine stars like KEMIO (295,700 Vine followers) and Reika Oozeki (735,000 Vine followers).

Moreover, becoming a YouTuber is ranked third in a survey of dream jobs among middle school kids in Japan. Most of these famous social media stars become famous because of their funny videos and pictures. Snapchat’s funny filters can fit right into this culture of engaging short videos.

Thus, if your brand can create opportunities for both of such influencers and users to be funny with your Snapchat lenses or Geofilters, it will end up with high performance to reach many active Snapchat users.

On Snapchat, users can take selfies, add filters, comments and illustrations, and then send them privately to their friends. This is a powerful feature that can potentially take the place of stamps on LINE – a messaging app that has more users than Facebook and Twitter in Japan. Japanese people generally love character-themed stamps and emojis to help them express how they feel in a funny or subtle way, and LINE’s extensive stamp shop is a big reason why the app is heavily used in Japan.

Snapchat has filters (both filters you apply while taking your photo and filters you apply after) and (more recently) stickers that users can add to their photos or videos. Japanese users can exchange their original pictures or videos with these customizations instead of using ready-made stamps on LINE. If these filters and stickers on Snapchat can be tweaked to further reflect Japanese tastes (especially character-themed stamps and filters!) then there is a very huge potential for growth.

Despite ample opportunity in Japan, however, scaling in a new country is still an uphill battle.

Although Japan has creative and funny young social media stars, Japanese cultural tendencies still heavily affect social media behavior online. One aspect of this that might negatively impact the usage of Snapchat’s unique features is Japanese prudency when it comes to posting online.

Without the element of anonymity (which Twitter provides and is partially why it’s so popular in Japan), Japanese people tend to think very carefully before posting something. It might take time for Japanese people to adjust to the easygoing nature of Snapchat, sharing their daily activities freely and frequently enough to involve in company campaigns. Businesses also need to participate in order to accelerate this mental shift.

Is Your Audience on Snapchat?

Snapchat is popular among younger people – especially those under age 24. Similarly, Japanese youth are much more engaged on social media than their older counterparts. So if Snapchat were to become widespread in Japan, it would start with Japanese teenagers. If you target audience is on the younger side, then Snapchat could be a good medium to explore, but if not, then you should be skeptical about including Snapchat in your Japanese marketing plan.

Regardless of your audience, though, it’s important to observe whether or not Japanese teenagers will eventually buy into the Snapchat phenomenon.