To enter a new market, understanding people qualitatively and quantitatively and localizing then are keys to success.

However, sometimes it is not easy to get insight from outside.

So in this article, as a Japanese person, will cover two of the common characteristics of Japanese people which are: (1) Hesitation to share an honest opinion and (2) Long commuting time and how Japanese companies take advantage of these for their businesses and takeaways from them for non-Japanese companies.

Japanese people tend to have hesitation when telling their honest opinion or feeling in front of people or in public, and they often prefer being anonymous in order to tell honest opinions.

Japanese Culture That Drives The Hesitation

To understand this tendency and the reason behind, you should know a common Japanese culture called “Honne and Tatemae”.

As a result, that is not necessarily your true opinion or feeling. So when Japanese people choose whether Honne and Tatemae is appropriate depends on the situation or circumstance and other people who are listening.

They do this because they don’t want to make other people feel offended by giving opposite opinions or negative feedback, and also they want to avoid arguments that might come up from different opinions and ideas.

Here is an example:

Here are typical Japanese people who work at a Japanese company in Tokyo. On Friday, his or her boss and coworker come to the person and ask if he or she is available that night for dinner and drinks.

The person’s Honne is, “No, I don’t wanna go as I’m exhausted!” but at the same time, one concern comes to the mind saying, “I don’t want them to feel bad about rejecting their invitation but I need to say no.” So in this case, typical Japanese people tend to decide to use Tatemae saying, “I’d love to go, but sorry I have other plans.”

So instead of directly saying “No”, Tatemae sounds a bit positive and a nicer way to hide Honne. Some people even use more extreme Tatemae like, “Sure, let’s go!” even though their Honne (true feeling) is “No, I don’t wanna go.”

If you look at social media use, you will find interestingly that Twitter is the place where Japanese people feel more comfortable to tell the truth WITH anonymous usernames.

Some people say Twitter in the U.S. is dying, and its MAU is slightly declining 2 million in these few years, currently at 67 million MAU.

So why is that? There are several reasons why Twitter is still big in Japan.

One is that the Japanese language can take advantage of word limits (it is connected to the nature of Japanese writing. These are several writing systems in Japanese: Kanji, Hiragana, and Katakana. A single character, or letter, often represents an entire word or meaning, so much more information can be packed into 240 words, one tweet.

Another reason can be that Twitter fits internet/anime geeks’ culture, unlike other social media.

For example, Twitter doesn’t need to use nice looking photo like on Instagram; there are casual conversations and subculture topics, and it is easy to connect other users who have the same interests.

This article doesn’t go deep into this part but we can see a somewhat similar atmosphere between Twitter and other platforms these internet people like such as 2channel and Nico Nico Douga.

Besides these reasons, anonymity on Twitter is key factor of Twitter’s success in Japan.

In fact, one research shows that about 86% of Twitter accounts in Japan use a fake name or not real name. Being anonymous actually encourages them to be more active and tweet their casual/honest comments. so Twitter is one comfortable place to share their opinions.

High engagement of “Balse Festival” and brands should dive into it

Let’s look at how much Japanese people are active on Twitter with one of the most famous activities, called “Balse Festival” which broke the Twitter world record of tweets.

There is one of the classic Studio Ghibli anime, named “Castle in the Sky.” In the climax of the movie, the Spell of Destruction was cast with the word “Balse” to bring down the castle and fight evil.

This movie was broadcast before on TV program in Japan. In the climax, and the moment the word was spelled, many of the Japanese twitter users tweeted “Balse” together to fight the evil. This is what people call “Balse Festival.” And this activity became a tradition among the fans.

In 2013, the tweet of “Balse” peaked 143K tweet per second and that broke the record of “Happy New Year” tweet in Japanese of the same year (33K TPS) and even beyond the tweets about Beyonce’s announcement of her pregnancy! So Balse even beat Beyonce.

Although “Balse” is not related to user’s honest voice or opinion, you can get the idea of how much Japanese are active on Twitter.

Of course many of Japanese corporations have joined this Balse festival by tweeting Balse. For business, it is also great opportunity.

For example, one of the major Japanese healthcare device brands named Tanita ran a campaign by challenging the Balse tweets. Through this campaign, Tanita challenged users to tweet “Tanita” more than “Balse.”

If the number of “Tanita” tweets was more than “Balse,” Tanita promised that they would introduce new limited products to feature Balse and “Castle in the Sky.” As a result, Balse won and Tanita changed their Twitter account name into Balse for a while instead.

Balse Festival may initially sound like nothing for business, but it was a great opportunity to reach out to those customers and join their community to make them feel closer to the brand and keep them loyal.

More active on review and Q&A sites with anonymity: Yelp vs Tabelog

Let’s look at review and Q&A websites where we can also tell people prefer to be anonymous in order to be more talkative.

Yelp and Quora are the top used user-generated review and Q&A websites. They require us to use real names to assure the reliability of content and that is one of their features.

On the other hand, the top used review and Q&A websites in Japan, such as Tabelog and Yahoo! Japan Chiebukuro, don’t need the user’s real names, allowing Japanese people to feel more comfortable to write reviews or comments.

Although Yelp and Quora already entered the Japanese market, review sites using real names in Japan are not as common as in the U.S. yet. Also, there is no information about the number of Yelp and Quora’s users in Japan, but it seems foreigners who visited Japan are more active on Yelp.

Of course, there are some services that require real names founded in Japan that some people have started to use like NewsPicks, for example.

It’s a curated media platform mainly focusing on business topics so there is some potential but it depends on what kind of category the service features. For example, for business use, people might be willing to use their real names.

Related Article: UX Design in Japan and Business Strategies: Insights You Couldn’t Find on the Internet Before

So no matter how many ads and contents are going to online, offline content such as ads on trains in big cities of Japan still can catch many eyes.

But first, since some of you guys may not have an idea of what commuting is like in Tokyo, so let me share what it looks like. 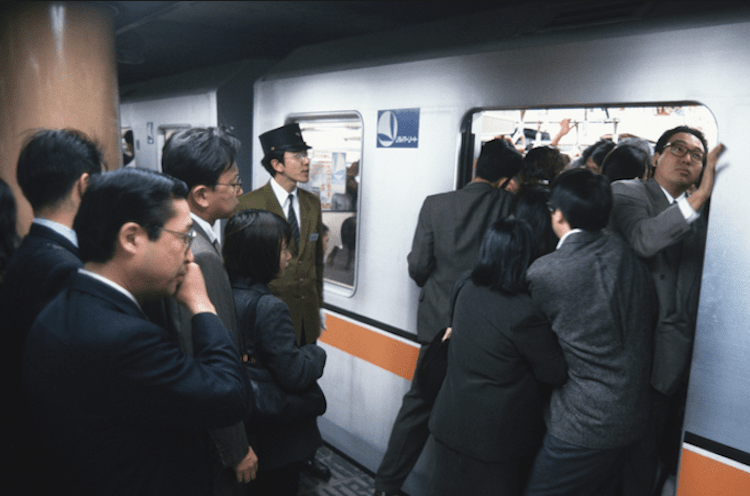 It’s a kind of hell that happens every morning. People push each other and there are many passive-aggressive things going on. No one is happy.

In the Tokyo metropolitan area, there are 29 lines including subways. The average commuting time in Tokyo is about one hour and more than 4.9 million people use Yamanote line in a day.

Yamanote line is the most used train in Tokyo and it circles the Tokyo Metropolitan Area stopping at all major stations hubs in the 23 wards of Tokyo. So you cannot underestimate the power of ads on the train!

Do people see the advertisement on trains??

Even though more and more people use mobile phones while they commute on the train (60%), there are still big opportunities for advertisers on the train (graph shows that about 45% of passengers see ads on trains and about 43% see train video ad) .

Recently trains have monitor/displays above the doors that play video contents such as weather forecast, breaking news, and ads. It’s commonly known as “Train Channel” and it actually brings a lot of marketing contributions. The ad cost of the Train Channel is not cheap ($45K for 15 sec/week), so you can tell that it still has huge impact.

One of the advantages of train channel ads is targeting. Like TV or social media ads, Train Channel content can change depends on the time. So in the morning, it’s good timing for canned coffee brands and evening for beer brands.

Also since Japanese railways work to keep women riders safe and comfortable during their commute, there are women-only train cars during the rush hour where advertisers can target women specifically. 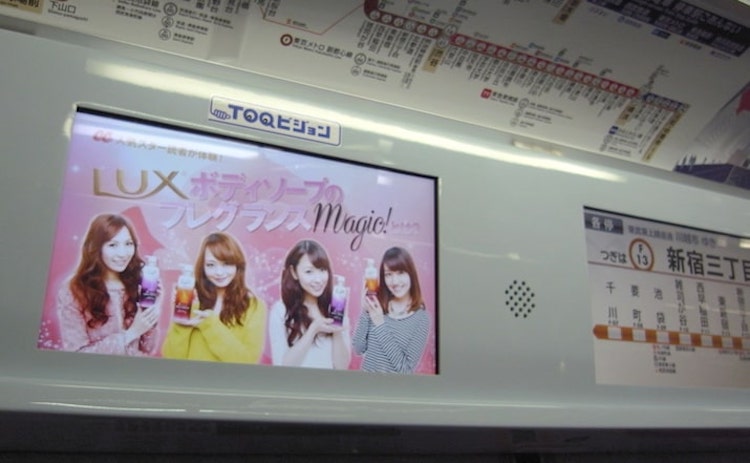 Train ads are also effective for multi-channel marketing. Most of the stations have a kiosk or a small shopping area even inside of the station connected to shopping malls or department stores. This becomes a flow: You’ll see ads on the train and after getting off the train there are Kiosk on the platform.

While you go to another platform to transfer or exit, you’ll keep seeing ads or digital signage in the station. A few minutes from the station you’ll see huge stores nearby featuring stores or products advertised on the trains.

So through these advertisements, how we share messages to passengers and pedestrians on train and in the station can be a great trigger for them to make a decision and let them take action! 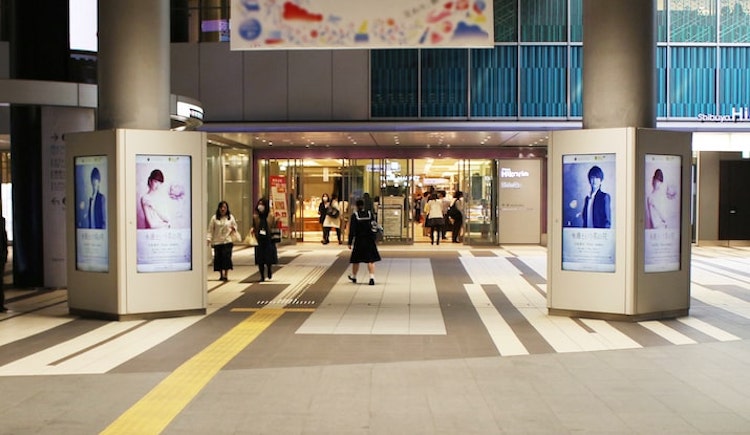 Common sense in the U.S. is not common sense in Japan and your business should be aware of these differences for your research, service development, and anything else.

As you might find these characteristics in this article new insights for you, it’s not easy to get them by yourself.

btrax can help your business with market research, building strategy, creating prototypes, conducting user testing, executing marketing and so on. If you are interested, please do not hesitate to contact us. If you enjoy this article, sign up for our newsletter! We look forward to connecting with you!