Ask young people what social media sites and apps they use the most on the streets of Tokyo, and you’ll mostly hear names like Twitter, Instagram, and Snow. That’s because teens don’t yet have a use for Facebook – which serves a much more professional than social purpose in Japan, much like LinkedIn in the US.

In the last two years, we’ve summarized and built upon our report on Japan’s social media landscape. For a more general introduction to the social players in Japan, check out our 2016 article. This year’s article will focus on how the biggest players, Twitter, Facebook, Instagram, and LINE have changed in the past year, and introduce the newest player: Snow.

Twitter had only recently started reporting their user numbers separated by country, and from that, we saw that they have an even bigger lead on Facebook than previously thought. Twitter themselves reported that they had 40 million monthly active users (MAU) in 2016. This is a huge lead over Facebook which has 26 million users, and Instagram which has 12 million users.

In the graph below, you can see the large lead Twitter has over its rivals. However, it also looks like Twitter experienced significant growth in between 2014 and 2015. This is probably not true but is instead due to the fact that Twitter only started reporting their official usage figures in 2015. The data from 2014 and before is estimated by eMarketer, which put Twitter usage at around the same percentage as Facebook.

As it turns out, even though we knew Twitter was widely used in Japan, we had still underestimated its influence. 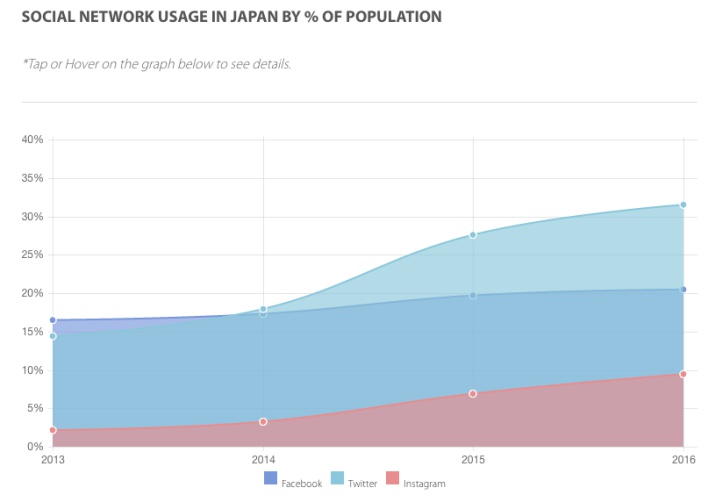 On top of having far more monthly active users than their rivals by a mile, Twitter also has a demographic advantage. More than 50 percent of Japanese Twitter users are between ages 10 to 29. Additionally, the female-male ratio on Japanese Twitter users is almost 1:1 (49 percent female, 51 percent male). Of course, thanks to Twitter’s anonymity, the content shared on the platform by Japanese users is much more diverse, engaged, and frequent, especially compared to Facebook where Japanese are friends with their bosses and have to keep up appearances.

Facebook’s growth in Japan has been slow, but they’re still 26 million MAU strong in 2016, as reported directly by Facebook.

However, also due to the fact that Facebook generally requires your real name and identity, Japanese users have started using Facebook a lot more like LinkedIn – as a networking tool. Your boss or people you meet at work events in Japan may add you on Facebook as a way to keep in touch professionally.

As a result, Japanese Facebook users care about what they post and how they are perceived on Facebook. The types of posts people create tend to be less controversial and more widely acceptable compared to Twitter.

Another side effect of Facebook being more professional is that the demographics of those who use Facebook in Japan tends to skew older. Less than 7 percent of Facebook’s Japanese users are younger than 20, but more than half are between 20 to 40 years old.

Facebook reported 12 million monthly active users on Instagram in 2016, a 37 percent increase since 2015. This ranks it as the fastest growing social network and Japan, and the momentum looks to continue as Japanese users rated Instagram as the most enjoyable social network in 2016, tied with LINE.

Graph above: Most satisfying social networks rated by Japanese users

Instagram’s growing popularity can likely be attributed to its anonymity as well as its ease of use. Many Japanese retail businesses also have Instagram accounts now on top of Facebook pages in order to promote their shop to users – in particular retail stores that sell fashion and accessories, or hair and beauty services. Japanese celebrities also have Instagram accounts on top of blogging using LINE’s blog platform or the more traditional Ameblo.

It goes without saying that LINE continues to be the top messaging app in Japan, with 62 million monthly active users in 2016. On top of scoring the biggest tech IPO in 2016, debuting with a US$9 billion valuation, LINE also saw its revenue grow to US$1.2 billion, which is 17 percent more than the year before. Its profit in 2016 was US$66.6 million, compared to a similar size loss in 2015.

Despite this success, LINE has seen its user base shrink due to increased competition in the social messenger space. Their monthly active users (MAUs) decreased in Q4 2016 to 217 million from 220 million the previous quarter.

Popular among Japan’s teens, Snow is Japan’s answer to Snapchat, and is owned by Naver, which is also parent to LINE. The app recently crossed 100 million downloads in December 2016 and currently boasts around 50 million monthly active users (Snow claims that 40-50 percent of their userbase is active each month).

Compared to Snapchat’s 150 million MAU, this is still child’s play, but Snow targets Chinese, Korean and Japanese users, with features and filters tailored to their tastes and usage behavior. Snapchat is at a disadvantage here not only because Naver has a deep understanding of Asian users (in particular Japanese users), but also because Snapchat is blocked in China.

Naver saw the opportunity in Snow and decided to reject the offer from Mark Zuckerberg in the summer of 2016. They’ve also started to increase the links between their big hit LINE and Snow with LINE’s investing US$45 million in Snow in September 2016. With China’s 700 million active internet users, there’s a huge opportunity for Snow to fill a gap without competition from Snapchat.