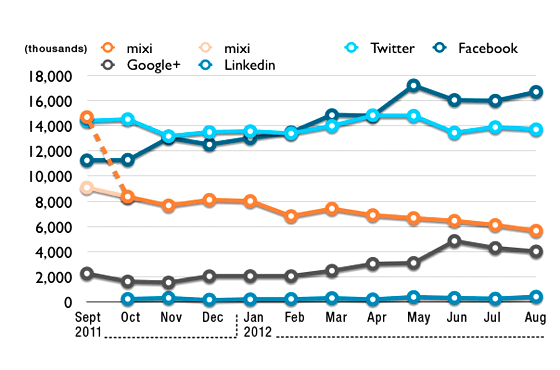 Our media partner,Looops Communications, reports on the Japanese Internet audience monthly by device (mobile and desktop). This article will summarize the popular Social Media Networks for just desktop/laptops in Japan for August 2012. The data comes from Netview Nielsen – “service and synthesizing information from desktop/laptop users at home and in the workplace.”

In terms of reach, Facebook captured 27.9% of the total desktop Internet website visits. On the other hand, mixi’s average visit time was 140 minutes which is almost double that of Facebook. In August, Twitter and Google+ had 106%, and 104% MoM in average Time on Site minutes respectively. Something to note, people using Twitter/Social Media clients (TweetDeck, etc. Hootsuite) are not included, so, the number of Twitter users could actually be a little more than the number of visitors indicated in the survey.

The number of visitors data only assumes desktoplaptop only users. Here are some other points to consider:

Let’s look at the number of visitors to these five services. 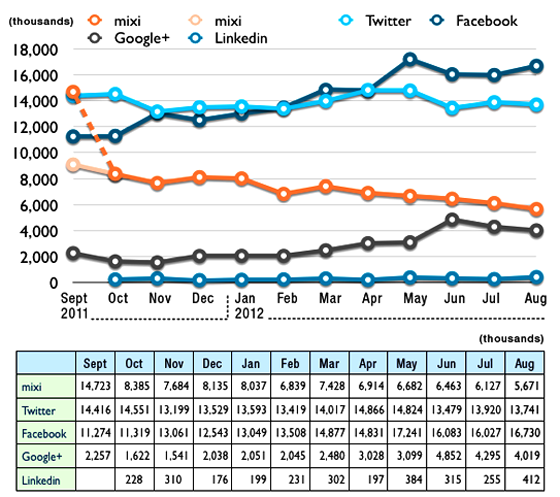 Facebook, in comparison with the previous month, two services Linkedin has started to rise. On the other hand, if we follow the changes in half a year, the result was mixi -17.1%*, Twitter +2.4%, Facebook +23.9%, Google+ +96.5%, and Linkedin +78.4% . Facebook, Google+ and LinkedIn have increased the number of visitors steadily over the year.
*Nielsen comments: There were changes to the target URL mixi aggregate data from October 2011 and the continuity of the data before and after October 2011 may be lost. This is the official data at the time of publication and we will not be going back to the past to change the URL data aggregation. However, only a linear number of visitors are not included in the URL because there is potential for misunderstanding to understand the usage of mixi, , these people were excluded from the aggregate in October 2011 as a reference value only to graph usage trend series and because of this change in this aggregate method, mixi has retreated to third place.

Next, let’s look at the page views and visits of five services. 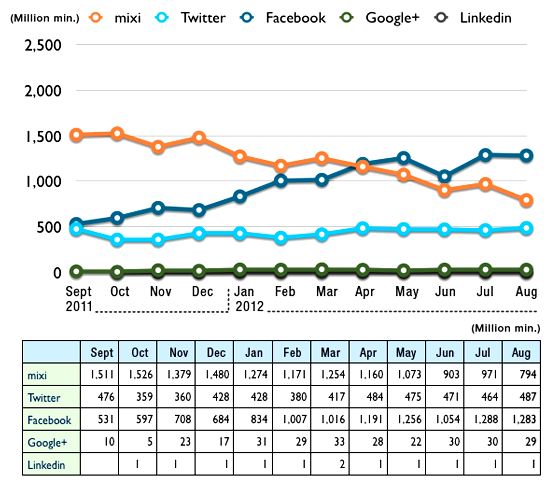 In terms of pages and durations of visits, Facebook has led all SNSs on separate page visits and view time. On the other hand, there was a decreasing trend in mixi at -23.5% in page views and -19.2% for time on site. Twitter page views have been very constant and varying around 5%. For Google+ page views have increased 9% compared with the previous month.

Next, let’s look at the data of the five SNSs by overlapping visits.

This table shows that Twitter and Facebook are well established amongst SNS users in Japan. mixi users have high utilization of Twtiter users(53.1%) and Facebook(64.0%). The highest average utilization overlap across all the SNS was Facebook at 68.7%, the proportion of users of each service is a combination of Facebook that slightly less than 70%.

Finally, let’s look at the attributes of each service visitors.

Social Networks are Genderfied Except on mixi 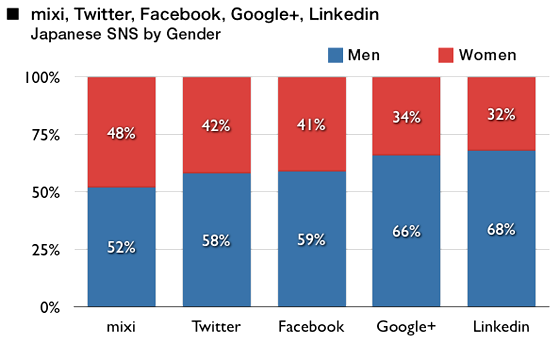 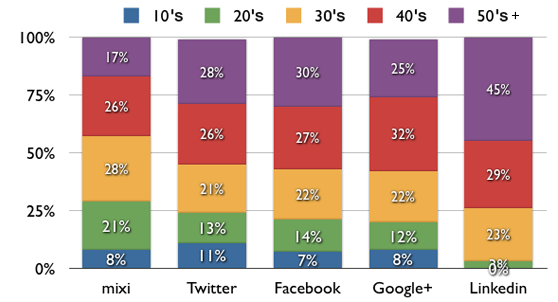 In Facebook, the 40+ age group has become a little less than 60% of the total which is amazing. The composition ratio of Twitter and Facebook were very similar. By conparison, mixi has a higher proportion of women and users under 30. Currently, there is a bias in both male users Google+ and Linkedin. The higher proportion of women and users under 30 in mixi could be skewed by the lack of data from the mobile smartphone mixi. 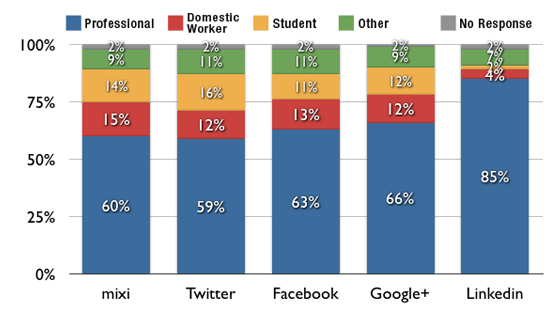 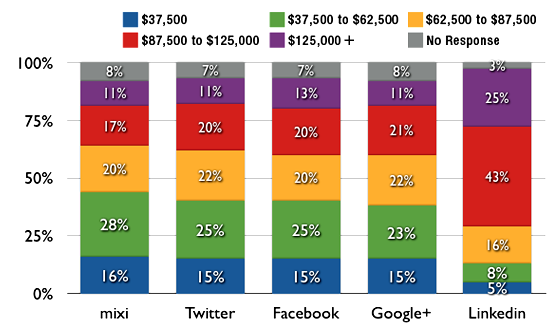 For the occupational distribution, the composition ratio is similar in four of the services other than Linkedin. If you look at the household income distribution, approximately 60% of the number of visitors of four services are professionals. On the other hand, Linkedin is purely a business SNS where a little less than 90% are professionals and the distribution of household income is among 70% of people with high-income earners of >$87,500 and above.

Here is the link to the original article in Japanese.