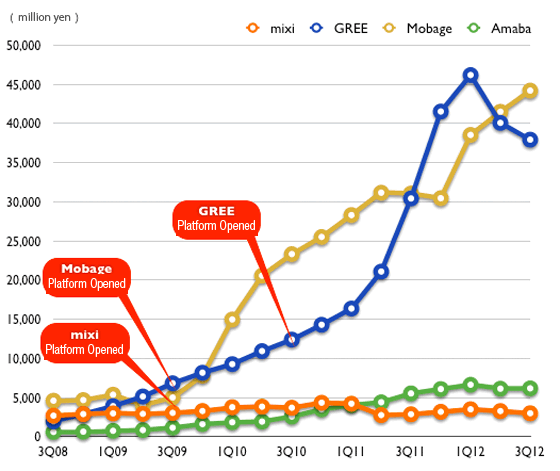 This article was originally published in Japanese and translated by btrax CEO Brandon Hill.

The interim results (July-September 2012) for the four companies that operate the country’s four major social apps platform (mixi, GREE, Mobage, and Ameba) is now available. The key takeaways surrounding the four services are the rapid transition from feature phones to smartphones and the regulatory enforcement of complete gacha (konpugacha) or “gaming use.” Moreover, the Apple’s “App Store”, Google’s “Google Play Store”, followed by Amazon’s “Appstore for Android” are truly in a state of drastic change. Taking these situations into account, we would like to objectively report the financial position of each company.

In addition, this analysis uses the latest financial report published by each company for the investment community. We are also using the media materials issued for advertising agency / clients as the main source of information, referencing to materials such as Mitsubishi UFJ Morgan Stanley securities research material, “Exploring the identity of the social game”. In this article, we will try to compare the performance of each company and services.

■ Regarding the latest quarterly accounts for each company (July-September 2012), company-wide performance comparison…

First, let’s start from the financial analysis of the company based on the latest quarterly financial information of each company. 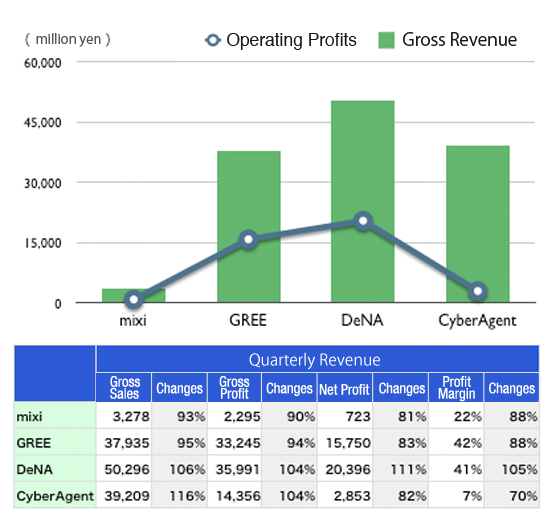 In the chart above, “compared to previous quarter” refers to the comparison from January-March 2012. Additionally, the “profit margin” denotes the operating profit margin. Following the previous year, due to the effects of the abolition of Complete-gacha, compared with the previous quarter, GREE’s proceeds is 95%, while operating profit has fallen to 83%. In an interview, President Yoshikazu Tanaka of GREE, Inc. said: “June is full of issues such as Complete-gacha and to deal with it, we have to use internal resources, which as a result had affected our sales.” While he acknowledged its effects, he announced that the company’s fee-based earnings are well on its way to recovery. Compared to the previous quarter, DeNA improved sales to 106% and operating profit is 111%; its continued growth has surpassed its rival.

On the other hand, the decline in mixi’s sales (93% compared to previous quarter), and operating profit (81% compared to previous quarter) is striking. Similarly, compared with previous quarter, CyberAgent’s sales are 116%. Although it is on a recovery trend, CyberAgent’s operating profits is 82%, resulting in a decline for this quarter. The focus of their resources on smartphone media start-up business is considered to be the main cause for it. More importantly, these three companies, DeNA (Auction business, etc.), mixi (Find a Job business, etc), and CyberAgent (advertising agency business, etc.) are also involved in projects other than Social Networking Services. Excluding those and taking only businesses that are related to social networking services into consideration, the time series overview of the sales of these four companies would look like the following.

Revenue by the Japanese Social Platform

If you compare in terms of Social Networking Services related sales, followed by the previous quarter, Mobage’s rise and GREE’s decline is strikingly noticeable; Mobage is unrivaled and it is becoming a monopoly. In respect to Ameba and mixi, they have the same ranking as the previous year. In addition, the 1Q in this article represents the January-March quarter, while the 4Q represents the October-December quarter. In order to understand the main cause of the decline of sales in each company, we will break down the Social Media Platform related business sales for this quarter further into fee sales and advertising revenue and make my comparison. 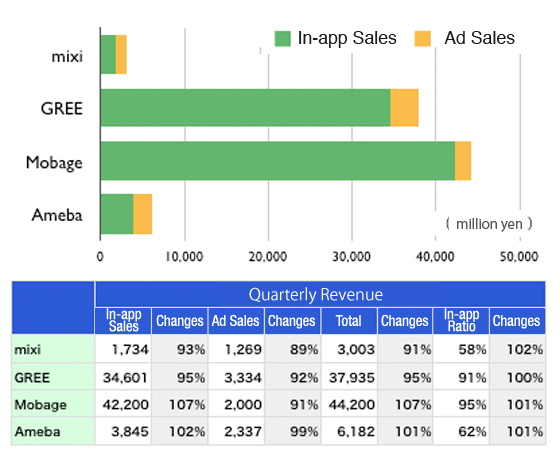 In terms of fee-based sales, comparing to the previous quarter, Mobage and Ameba have both risen. Additionally, this have resulted the fee rise ratio for both companies. Looking at it from a different angle, just like the previous quarter, the hard-fought battle in advertising sales still continues. The rapid sales growth from smartphone ads which have caused the fast decline of feature phones advertising revenues is thought to be the main factor.

For your reference, the detailed graph of CyberAgent sales by User Devices is shown below. The graph shows the differences in the trends of devices via advertising sales. Although circumstances may vary  for advertising sales depending on the company, Let’s examine this graph assuming that feature phones are no longer in use and the trends of users are different.

CyberAgent – Sales by the User Devices 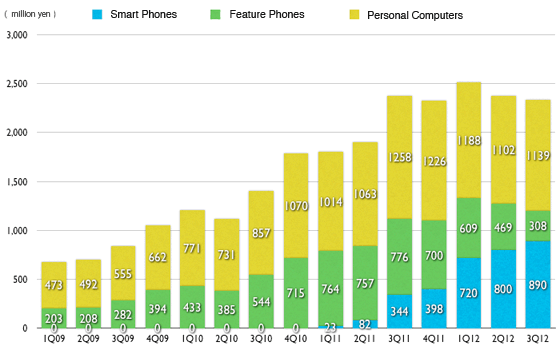 In terms of fee-based sales, in order to understand each company’s indicator more precisely I would normally examine things like ARPU(Average Revenue Per Users) or monthly sales average revenue per member. Unfortunately, I cannot do so because GREE’s data on the number of users is not open to the public.

For example, for GREE, the leading indicator of sales would be the number of registered users and page views. For mixi, it is pageviews and for Ameba it is the number of active users. There is a growing trend for companies to keep their non-important KPI indicators private.

Regarding the overseas deployment of each service…

For the status of each overseas company, DeNA is doing well in Google Play with its in-house games such as “Ninja Royale” and “Blood Brothers” which is ranked within the top 20. There was also a comment about “Mobage West” coin consumption of July 2012 reaching the level of $30 million.

For CyberAgent, “Rage of Bahamut” which was developed by the subsidiary Cygames has been ranking consecutively quarterly within the top 6 in the sales rankings of Google Play and iPhone in the U.S. In addition, “Legend of the Cryptids” which was developed by the CyberAgent’s subsidiary, BotApp is at the top of iPhone sales ranking too; when compared to the previous quarter, overseas sales has significantly increased from July to September 2012.

For GREE, they are closing down the social game platform “OpenFeint” service which they acquired in April last year and urging the transition to “GREE Platform.”  GREE  is  steadily making progress in social game development as well as the strengthening of their management structure. As of April last year, OpenFeint supports over 5000 games and had 75 million users worldwide.

Here is the link to the original article in Japanese.