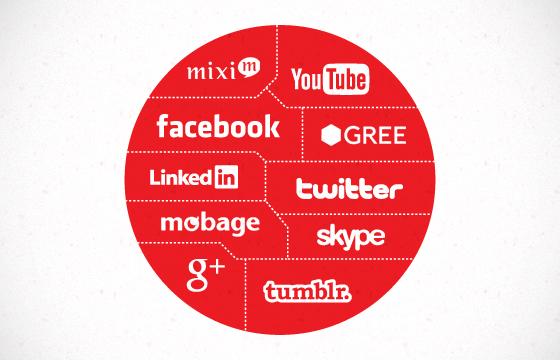 Social Network Services (SNS) used by the Japanese are both common to other users in the world but also different. I will describe some of the differences that the Japanese use and why they use them the way they do.

Social Network Usage in Japan – Some Similarities, Some Differences

Now, when you ask Japanese people what SNS they use, most Japanese will not think about Facebook.

Why? Because there are social networking sites which are still more popular than Facebook in Japan and every Japanese user’s time is taken up by those other social media sites.

The SNS in which the Japanese use changes according to the environment they’re in. For example, a young woman and student who lives in the rural areas of Japan will use mixi, a businessman will use Facebook or LinkedIn, and a student in Tokyo or a young man will use Twitter.

It can be said the Japanese tend to have a practical use of  the social networks in Japan.

Mixi, Facebook, and Twitter are three major social networks in Japan, and it could be said that a comparatively realistic social graph is used as a baseline for the Japanese.

On the other hand, Mobage and GREE could be called social media sites which uses a virtual graph and is used on many mobile phones.

Although I introduced five social media famous in Japan – mixi, Facebook, Twitter, Mobage, GREE, there are two unique SNS – Facebook and Twitter. These SNS are unique because these SNS are not built in Japan.

These two services were proven to be very important for the Japanese because it teaches the Japanese a new use of the Internet.  It requires them to use their identities in the open like a real name or face on the public web.

The Japanese are Shy

As you know, Japanese people are very shy or introverted.

The Japanese seldom argue in the open compared with a foreign person and they care about the feelings of people around them – a friend, a coworker, and general people.

Japanese people tend to care a lot about the reputation of their surroundings. For this reason, Japanese talk around a subject sometimes.

For example, if Friend request comes by Facebook from their Boss or maybe a friend that is not getting along, Japanese people cannot refuse due to their politeness. They accept the request even if they don’t want to do so.

Most postings to a social network become contents that a boss or co-worker can see. In order to avoid being pointed out in a photo which is posted on Facebook, the frequency of using services like Facebook decreases. There are many some persons who use two or more Twitter accounts – a realistic account and dummy account.

In Japan, Twitter is very popular because it is mobile friendly and they can tweet the dissatisfaction openly.  When using a dummy account they can feel comfortable that it won’t cause a problem at either at their company or at home.

Although I have not lived in the United States, do Americans use SNS the same way?

Starting from 2004, the most popular social network in Japan is mixi. The number of average friends is said to be 40 persons, and main users have a social graph of like-minded friends – like friends from Junior High School or Elementary school.

Since Japanese people are always caring about their off-line life, mixi gives the Japanese comfort with its walls. It is still popular with feature phone users. Last summer, mixi started a service like Facebook.

Since Facebook is a platform which has 800 million people in world, a Japanese company can connect the products of Japan to the world by using a Facebook fan page.

Satisfaction Guaranteed is a main cultural feeling in Asia. It could be called a good example. Thus, Facebook in Japan is very business oriented first versus being from students first like the United States.

Japanese Look to a Virtual World for Relaxation

Today, the companies which is the most powerful in Japan are Mobage and GREE.

Although these are social gaming platforms, they are services which specializes in the use of mobile unlike Zynga.

Mobage and GREE use a virtual social graph. A realistic social graph is not used fundamentally.

During the day, the Japanese care about a boss or his clients and when they go home late at night, they will care about a wife or a child. Many of Japanese businessmen or salaryman are tired.

Since he is tired with the off-line world, the salaryman asks for  a virtual private room. The only place where he can go is in the Mobage or  GREE social media worlds.

For example, there is a game which you can fish with a friend. Although it is great for the pure enjoyment of fishing and competing for the number of fish, in order to get a good fish, a good fishing line is required. If you want to get an even bigger fish, it is necessary to purchase a fishing rod.

Some users are spending 10,000 yen($100.00) or more per month. I think that it is because Japanese people are hungry for having acceptance, so they use money and time in mobile social games.

As you can see, Social Networks provide a similar but different experience for the Japanese and fill some basic needs for the Japanese. Do people in the US feel the same?

This blog ariticle was written by Shinichiro Kinjo and transposed into english. Mr. Kinjo is a designer and hacker from Japan. Follow Shinichiro on Twitter as well as http://hanpanai.com/ (Japanese) for even more news and commentary.