Three years ago, we posted two blogs about the “Top 10 Most Popular Websites” in China and Japan respectively. Since then, a lot has happened in the cyberspace, but most of the top players stayed put, almost perfectly in order. Here, I’d like to reintroduce the Japanese top dogs, showcase the newcomers, and examine those websites that withered away. Check out the sister article on China from last week

At 79.5% population penetration, Japan’s 101 million Internet users ranks 4th only behind China (538M), United States (245M), and India (137M)  (data as of June, 2012). Long recognized as the technological haven of the world, we won’t be taking our eyes off Japan’s online trends in the foreseeable future.

As with China, Japan’s #1 through 3 did not budge from the top of the chart in the last three years either. While Yahoo! has lost out to Google years ago in the West, Yahoo! Japan has managed to hold on to the top spot for the last decade. No other websites in Japan offer such a complete package of contents under a single portal. Yahoo Japan logged 18.4 billion page views and 66 million unique visitors in February, compared with 13.4 billion page views and 62.7 million unique visitors for top rival Google Japan and its affiliates, according to comScore Japan. Those numbers effectively make Yahoo Japan and the sites under its banner the most popular in Japan (The Japan Times).

In order to stay above their biggest competitors, Google Japan and Rakuten, Yahoo! Japan shocked the business world in March this year by replacing the CEO and board members with people 10 years younger by average. In the press release, the new 44 year-old CEO, Manabu Miyasaka asserted that “a younger leadership was needed to compete against other Internet companies as the industry itself is growing at such a rapid pace.”

Not much to say about this global search engine behemoth. Though Yahoo! Japan has Google Japan beat with traffic, the mobile technology is firmly in Google’s hands with the success of Android. As far as search capabilities go, Yahoo! Japan has been using Google technology since the deal was struck in the latter half of 2010. Google will undoubtedly remain close to the top, strategizing its takeover of the elusive top spot in the Japanese cyberspace. Better stay tuned.

A free and easy to use website creation and blog hosting company. Hovering somewhere between Big Daddy and Blogger, FC2 had stealthily crept upward in the rankings beating out companies that have much better brand recognition to break the top 3 a couple years back. In the last year, FC2 has been expanding its web services to other big Asian markets, particularly in Indonesia, Korea, and China. Further, they’ve also added the South American markets as targets, releasing support for Portugese in February this year. Though some of FC2’s prominently featured adult section poses some controversy in some regional markets, adoption seems inevitable. 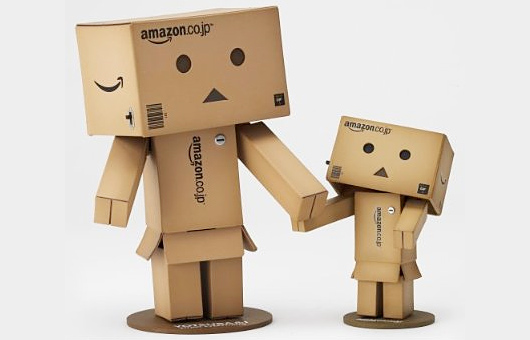 Pictured above are the adorable corporate mascots of Amazon Japan, officially known as Revoltech Danboard robots. In a clash of the e-commerce titans, Amazon Japan has overtaken Rakuten in Alexa rankings this year, and has made itself comfortable in the top 4. Rakuten, at #7, is not far behind, and is challenging Amazon’s Kindle e-readers with its own Kobo, launched in July. Not long after that, Amazon followed suit with the first Japanese-language Kindle, the Paperwhite, and also deputed Japanese Kindle stores in October. In November, Amazon Appstore was also launched in Japan, making it a “complete end-to-end market platform.” Amazon Japan vs. Rakuten may be one of the hottest topic of interest for the upcoming year!

Though the Japanese local-language version of Facebook debuted in 2008, the shy Japanese did not respond with significant traction for the longest time. The biggest of hurdles was culturally embedded; Facebook was too open and public for Japan’s comfort of animosity and closed community online. However, as celebrities and companies saw branding and business opportunities, along with Eisenberg’s Oscar winner, The Social Network opening in 2011 in Japan, the Japanese began to overcome their shyness (Businessweek).

“We think that Japanese internet users have started to realise the fun and merit of real-name communication on the web.”

Another trigger was last year’s earthquake and tsunami. While cellphone masts and telephone lines were affected by the disasters, data channels remained open and became the most effective way to stay in touch (NewScientist). With all the above lined up, Facebook has reached 15 million active users in Japan in September this year, triple the reported 5 million users in September 2011, just a year ago.

The above analytics is the perfect transition between the last paragraph to this. Simply put, mixi looks to be headed to become the MySpace of Japan. Rumor had it that Mixi may be being put up on sale to the highest bidder. Though mixi representatives quickly issued a statement that this was untrue, they will need to seriously think about their next moves.

Don’t forget to check out our first installation of Top Chinese Websites.