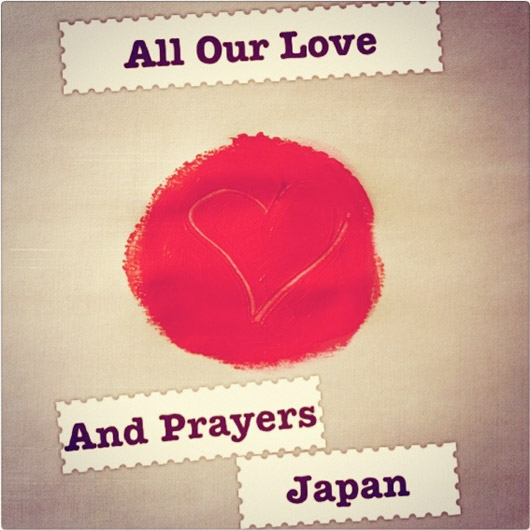 Convoy of Hope’s Disaster Response team is in contact with partners in Japan and identifying areas in the greatest need of assistance.
Country: USA
Donate online at convoyofhope.org or text TSUNAMI to 50555 to donate $10 toward the relief efforts.

Salvation Army is organizing efforts in Tokyo and will soon send a team to help the severely damaged city of Sendai, Japan.
Country: International
Text ‘JAPAN’ or ‘QUAKE’ to 80888 to make a $10 donation or visit SalvationArmyUSA.org.

They are asking for donations so they can provide medicine and medical supplies to victims of the disaster.
Country: US & other countries

They are sending two three-person teams to the Iwate and Miyagi prefectures in Japan.
Country: Switzerland and other countries.

They has set up a relief fund where you can make a donation, which will be distributed to relief and emergency services in the affected region.
Country: US & Other Countries
Partnersing with Global Giving, LivingSocial launched an offer for its customers that supports the Japan Earthquake and Tsunami Relief Fund and the Emergency Aid to Tsunami & Earthquake Survivors Fund.

They are reaching out to medical teams and emergency responders to offer assistance.

They are mobilizing a response to the disaster in Japan with a focus on helping the youngest victims.
New!Save the Children UK – If you are a UK taxpayer, the value of your gift can be increased by almost a third under the Gift Aid scheme at no extra cost to you. This means a monthly donation of £10 could be worth an extra £2.80 to us, and it doesn’t cost you a penny!

They are sending medical supplies and relief teams to Japan.
Country: US & UK
Help by donating $10 by texting MED to 80888 or Groupon http://www.groupon.com/deals/international-medical-corps

Country: International
Make a $10 donation to the Red Cross by text messaging REDCROSS to 90999 or visit redcross.org to donate online.
Apple set up a special donation page where users can donate money to the Red Cross.
Japanese Red Cross Society (in Japanese)
New! British Red Cross
New! Phillipine Red Cross – Philippine Red Cross are taking donations by SMS, which the Red Cross piloted after the earthquake in Haiti last year. In the Philippines text REDAMOUNT to 2899, or DONATEAMOUNT4-digit M-PINREDCROSS to 2882 for Globe subscribers, and REDON to 4483 for Smart subscribers.
Drive Thru RPG
One of the largest RPG(Role Playing Game) download stores on the net has a link for a donation for $5 for the Red Cross through One Bookshelf, Inc..

The company announced today that customers can use their mobile phones to make $10 donations to a host of non-profit organizations responding to the earthquake and subsequent tsunami.

Lady Gaga is selling silicon bands @ $5 and all proceeds will be donated to the relief effort in Japan.

ShelterBox is an international disaster relief charity that delivers emergency shelter, warmth and dignity to people affected by disaster worldwide.
Country: UK and 18 other countries

Judy Chang, head of PayPal’s nonprofit group, announced that transactional fees incurred by money transfers to US 501(c)(3) organizations (or charities registered with the Canada Revenue Agency) between March 11 and April 10 will aid relief efforts in Japan.
New! PayPal has set up an online store to take donations for Save the Children, GlobalGiving, HandsOn Network and the American Red Cross. Click on link above.

The Give2Asia Japan Earthquake & Tsunami Fund is responding to the needs of survivors through short-term to long-term recovery projects undertaken by the affected communities.

Japan Society has created a disaster relief fund to aid victims of the Tohoku earthquake in Japan.

This appeal was just sent out by the Operation Safe task force. We will be mobilizing relief volunteers, aiding in recovery and of course will be highly involved with helping children recover from trauma.

Capcom has reduced the price of Street Fighter IV for the iPhone/iPod Touch to just 115 yen ($0.99 for those outside Japan), and all the sales proceeds will subsequently be contributed to the Japan Earthquake relief fund.

Giving Children Hope is speaking with partners to assess damages and immediate needs. Currently, many injuries have been reported as well as immeasurable amounts of damage.

Numana, Inc. is a nonprofit hunger relief organization with the mission to empower people to save the starving. Through meal packaging events, Numana sends food to countries where intense insecurity exists. Please indicate “Japan” in the notes field in the process.

For decades, Japan has been there for the world’s children in their time of need, supporting UNICEF’s lifesaving work. Today, UNICEF is there for Japan’s children.

Donate resources to support relief efforts
HandsOn Tokyo (日本語）
Visit your Hands on Tokyo homepage on eBay (Please do not send goods, monetary resources are most useful in immediate relief)

World Vision plans to distribute relief supplies to meet the daily needs of quake and tsunami survivors. We will also focus our efforts on responding to the emotional needs of children, who are the most impacted after such a traumatic event.