While 2020 was an abrupt and widespread crisis, it provided a catalyst to transform traditional technological practices. Japan has seen a rise in new attitudes towards digital adoption, alluding to the imminent change for the future of human interaction and workplace productivity. 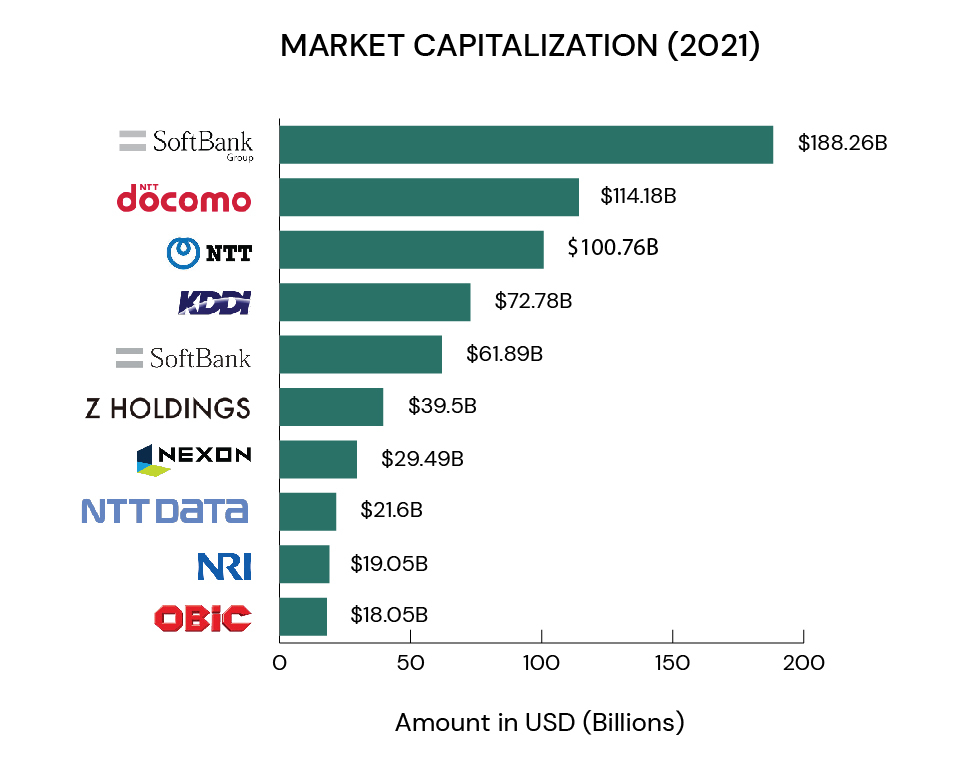 Little has changed from the last decade with the top 5 companies consistently dominated by major telecom companies in Japan. We expect that they will continue to govern for many years to come. E-commerce (Z Holdings Corporation) and gaming (Nexon) companies follow the telecom giants. Notably, there has been a rise in tech consultancies like Nomura Research Institute and OBIC Corporation in 2021.

Since our last article in 2018, Sony, Recruit, Nintendo, Canon, Hitachi, and Mitsubishi have moved from the top 10. These brands have had to compete with breakthrough innovation from new tech companies with the winners being able to bring constant discovery and development to their customers and partners.

Notes on the Japanese Gaming Industry

For the past 2 decades, Microsoft with its Xbox has failed to successfully enter the Japanese market. This is largely due to failed localization of the Xbox product. Japan is home to 3 big console makers, Ninetendo, Sega, and Sony.

Stream gaming has become a disruptor in the gaming industry. In May 2019, Microsoft and Sony agreed to a surprise partnership for cloud gaming. Google also entered the playing field with Stadia, a cloud gaming service. Stadia contributes to the drop in shares of Sony and Nintendo.

In the gaming industry, COVID just accelerated the trend that had been brewing over the previous years. Nexon continues to expand its PC games to mobile. And remember, there are roughly 3 billion highly game-playable workstations in people’s pockets around the world. In 2020, MapleStory was up 151% in Korea and 171% in Japan – a 24% growth from a year ago. 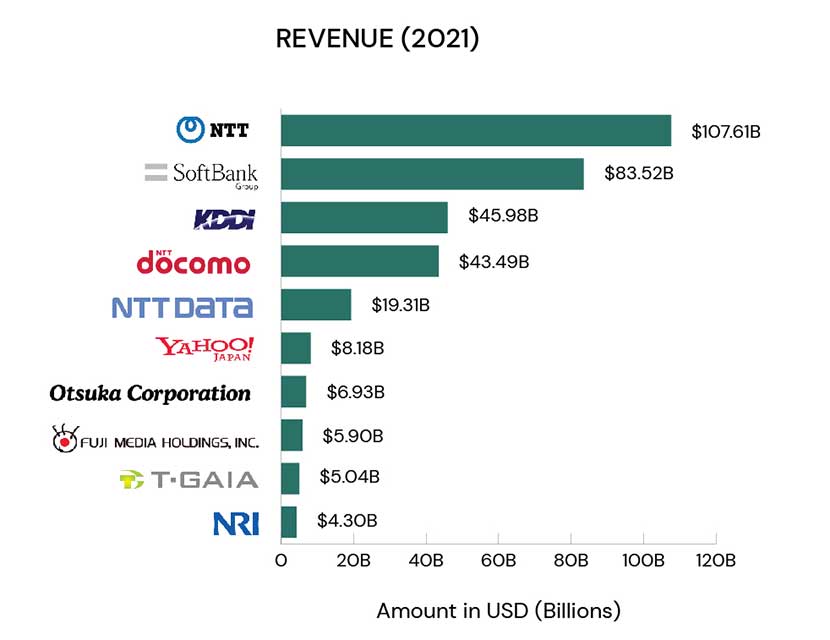 At the end of September 2020, NTT group decided to make NTT Docomo a wholly owned subsidiary, buying out the shares it didn’t already hold. The deal between the two, which would give NTT Docomo solid financial backing to engage in price wars, may trigger even more intense competition among the nation’s major wireless carriers. NTT is the largest domestic carrier in terms of its number of subscribers.

On December 30th, 2020, SoftBank Group bailed out Katerra, a construction startup, with over $200 million USD. Softbank Group is the world’s largest technology investor. 2020 has been a good year for Softbank, after recovering from WeWork’s IPO scandal.

With exceptional results in 2013 and 2019, NTT Data Corporation has continued to achieve outstanding revenue records. This is largely due to successful business with financial companies and the successful growth in acquisitions such as of Carlisle & Gallagher Consulting Group in 2016, Sierra Systems Group Inc in November 2018, Cognosante Consulting LLC in April 2019, AWS partner Flux7 in December 2019, and ServiceNow partner Acorio in 2020. 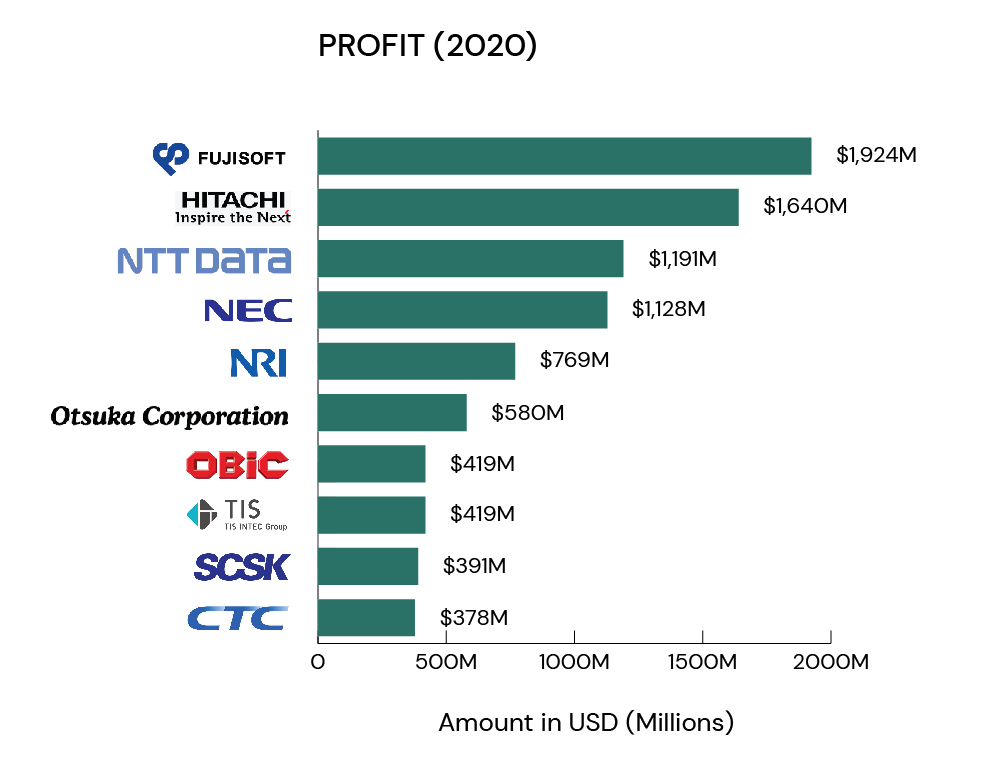 In the fall of 2020, Hitachi’s net profit soared more than five-fold to $3.5 billion from the previous year. Operating profit fell 28.9 percent to $2.936 billion, and on sales of $55.4 billion, down 5.8 percent. This is due to recovering demand for Hitachi elevators and auto parts in China, the world’s second-largest economy. It is considering selling all or part of its stake in its subsidiary Hitachi Metals Ltd., but has yet to make a decision.

In fiscal 2020, NEC achieved tremendous year-over-year gains in both revenue and operating profits after a structural reform in 2019. The net profit totaled $926 million USD, its highest level in 23 years due to the improved operating profit and tax effects from completing procedures to previously liquidated corporations.

The majority of top companies listed on the “Top Revenue” list are not listed on Profit. Major companies such as NTT and Softbank made 2020 headlines as they made remarkable acquisitions, lowering their profit margins (see above).

Since 2014, FUJISOFT and Hitachi have surpassed NTT Data Corporation in terms of profit. This may be due to NTT Data’s acquisition in August 2020 of American company, Acorio, the world’s largest pure-play servicenow consultancy.

Since 2018, Hitachi has cut their employment by 11%, mostly in Hitachi Metals, through “voluntary redundancy” and due to COVID. See above in Profits for Hitachi considering selling all or part of its stake in subsidiary Hitachi Metals Ltd.

Mitsubishi Electric, once 3rd in 2018, now is no longer on the list. This could be due to the new recruit’s suicide scandal in 2019.

Hitachi, Fujitsu, NEC, and NTT Data Corporation have had consistent employment numbers, even through COVID.

Insights on employment in Japan

Lifetime employment (Shūshin koyō) has long been the cornerstone of Japanese corporate governance. New college graduates will apply to a company rather than to a specific position and are expected to stay with the company until retirement.

Today, however, companies are changing their recruitment processes by hiring for specialized roles because of a shortage in the workforce and an increase in global competition. The latest OECD economic survey suggests that lifetime employment of employees in their 30s and 40s at large companies has fallen to 15% and 9.4%, respectively. Meanwhile 40% of the current labor force consists of part-time and contract workers.

Current Japanese employment laws are structured around traditional Japanese work culture, making it difficult to terminate employees. As a result, Japanese companies will offer voluntary retirement options if and when they need to restructure their businesses.

For example, in an attempt to restructure its company, Fujitsu, a Japanese multinational information technology equipment and services company, announced it planned to transfer some 5,000 workers from its back-office sections to tech-related positions. After this announcement, 2,850 workers voluntarily applied for retirement. Reportedly, most of these retirement applicants were employees who were 45 or older.

If you enjoyed this article, sign up for our newsletter to receive the latest updates on our articles and more!