In our previous article, “Top 10 Mobile Payment Options in Japan”, we learned that almost 80% of transactions in Japan are still made in cash. We can see this as a great chance for new businesses to implement mobile phone payment solutions in Japan.

The Japanese government is very serious about changing the current preferred payment methods in Japan. They set an ambitious goal to increase the ratio of cashless payment transactions up to 40% by 2025. Yano Research Institute expects that the market size of mobile payment will reach 48 million USD by 2023, which is more than 4 times than in 2017. 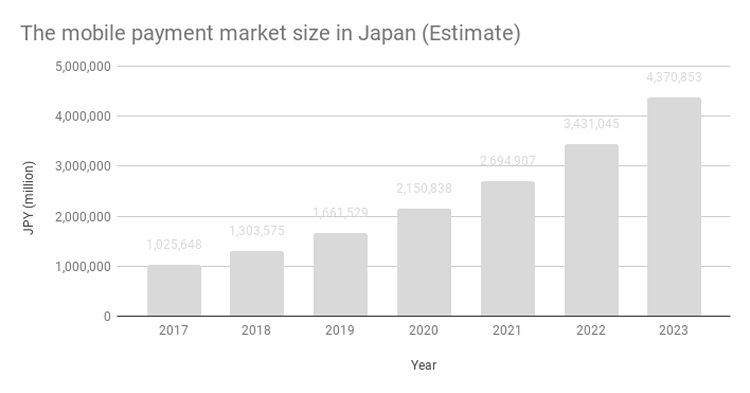 1. Cash is King: Cash is Convenient and Reliable

This leads us to a “chicken or egg first?” type of discussion: Since very few people use credit cards, stores are not willing to accept credit cards with extra transaction fees to credit companies.

Also, cash can be used even in circumstances of natural disasters like earthquakes and floods, which frequently happen in Japan. When the Tōhoku earthquake happened in 2011, credit cards were not usable because of the power outage. For that reason, people tend to carry more cash in case of emergencies.

Furthermore, there are ATM machines everywhere in Japan and most of these ATM machines don’t charge transaction fees or charge a very small amount. Japanese people don’t feel that using cash is inconvenient. In addition, Japan is a very safe country, so people don’t need to worry about pickpocketing, robbery, or receiving fake bills.

Many Japanese stores are reluctant to introduce cash-alternative payment methods because they don’t see benefits. According to the research conducted by NTT data, only a third of restaurants in Tokyo accept credit card (as of October 2017).

The number one reason why Japanese retail stores avoid mobile payment systems is because of the high transaction fees. The initial investment to introduce reader machines and employee training costs are also big burdens for the stores. Furthermore, cash-alternative payment methods create negative impacts on a store’s cash flow, which is especially hard on small businesses. 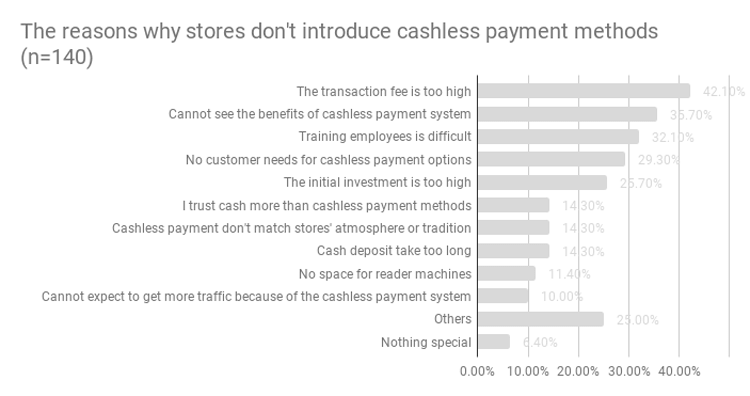 3. Cashless Payment in Japan has a Negative Stigma 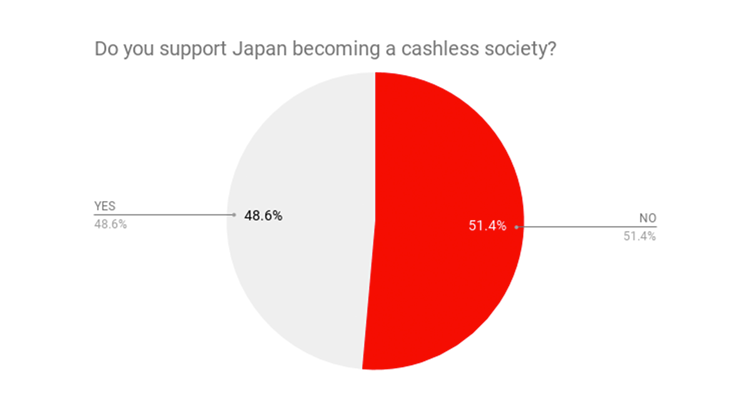 More than 20% of people who are against the cashless payment society are concerned with spending too much because they can’t physically track the ins-and-outs of their cash when they use credit cards. Also, people worry about the security of cash-alternative payment methods and the data breach of personal information.

Elderly people are worried about their inability to use mobile phone payment solutions that require them to be technologically literate. As Japan enters an age in which a third of its population is 60+ years old, their lack of technological knowledge concerns cannot be ignored.

How Can You Overcome the Obstacles?

As we discussed above, the social structure and psychological obstacles keep mobile payment methods from prevailing in Japan. So how can we win the game?

In order to encourage people to not only download the PayPay app, but also actually use it, it offered 20% cashback to anyone who used PayPay for shopping at retail stores and a chance to win 100% cashback for every 40 transactions. What a general campaign! 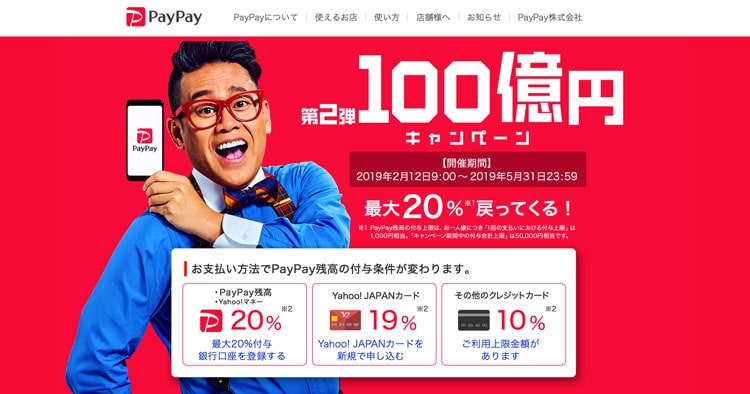 The promotion worked extremely well. Many people shared the cash prize they won on Twitter, which encouraged even more people to use the app. People surged to electronic stores and some lucky users won 100% cashback on expensive electronic goods! This PayPay promotion became a trending topic on Twitter for a while.

The promotion was over instantly since PayPay ran out of the 10 billion funds 10 days after the campaign launched. The outcome of the promotion was outstanding with the total number of PayPay users increased by 55 times. Also, the awareness of the app reached 62.2%, which allowed PayPay to beat out other mobile payment options.

The main reason why stores are hesitant to introduce cash-alternative payment methods is because they don’t see the value in the fact that it surpasses the overall costs. To tackle this issue, you, as a mobile payment provider, can offer affordable readers and/or lower the transaction fees. Also, you will want to offer quick cash deposit at many shops because the rate of cash flow does affect businesses, especially small businesses. To reduce training costs, the system you offer has to be as easy as possible to operate.

In addition, to mitigate the financial burden to stores, you should educate stores on the benefits of cashless payment methods. For example, you can teach stores how they can utilize the analysis of customers’ buying behaviors on their next marketing campaigns or how much labor costs stores can potentially save by introducing cashless transaction methods.

Square did a great job on educating Japanese small businesses with shocking research results: small to mid-size businesses in Japan spend 147 hours a year counting and depositing cash. If all of these businesses introduce the cashless payment solutions, the total saving will be 7.9 billion USD! ( 1 USD = 111.919 JPY) Square also revealed that 22.9% of Japanese consumers have given up on purchases because they could not use credit cards. This result tells that not accepting credit cards is a huge opportunity loss.

Finding Solutions to Your Consumers’ Concerns

Last but not least, you need to understand Japanese consumers’ concerns and offer solutions to make them more comfortable with using cashless payment methods. As we discussed earlier, consumers are concerned about a breach of their personal information, the inability of controlling their spending, and the incapability of using new technology.

For example, you can offer a function to send alerts to users when their spending reaches a certain amount of their spending limit or allow users to pre-pay an amount they can use per month.

Also, you want to make the UX as simple as possible so people with low technological literacy can use your technology more comfortably. In addition, educating users on financial literacy is a key too. Some people have an unarticulated uneasiness about using cash-alternative payment methods. We are all scared of things we don’t know. So just explaining how mobile payment systems work or how users can get compensated in the case of a breach might change the preferred payment methods in Japan.

We understand that you want to jump into the lucrative mobile payment market as fast as you can before your competitors do. However, you should not skip the steps of understanding user insights and solving their problems, especially if you are foreign to the Japanese market. In this case, you will need to tackle the concerns of your consumers and small businesses.

We at btrax have helped many global companies (See the Square’s case study here) understand Japanese users through user-centric market research and interviews that also help to create market entry strategies. Contact us and follow us on Twitter so we can discuss how to work together.

Did you enjoy this article? Sign up for our newsletter for more!