Nowadays, it seems that almost everyone in America knows about Marie Kondo, whether they have an interest in a minimal lifestyle or not. And if you don’t, where have you been?

Marie Kondo is a Japanese tidying expert, bestselling author, the star of her own Netflix show, and the founder of KonMari Media, Inc. She is best known as the mother of the KonMari method, a process to simplify and organize your life by getting rid of physical objects that no longer spark joy. 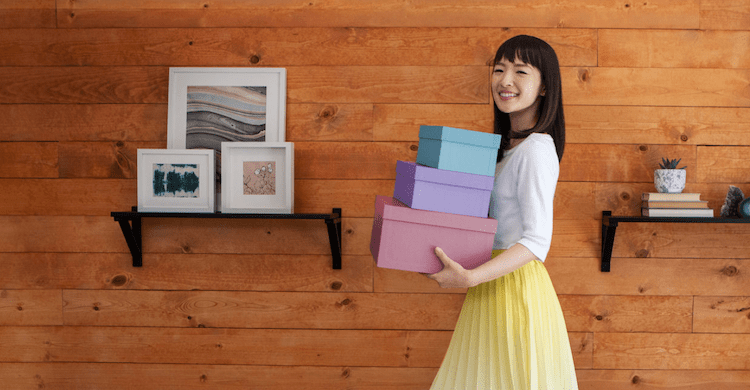 After the KonMari Netflix show aired in January of 2019, thrift stores were flooded with donations. Goodwill stores in the Washington, D.C. area received 66% more donations than usual, during the first week of January. One of those stores even reported a 367% increase in donations.

In March of 2019, it was reported that Kondo was looking to raise $40 million USD in venture capital funding to scale her brand, KonMari. Today, she has her own media company along with a new partnership with internet and e-commerce giant, Rakuten.

So, how did a Japanese tidying expert successfully build her brand in America? For one, the KonMari method solved real problems. However, we also take note of the various localization marketing methods she implemented as part of her business strategy.

【Related Article】Essentials of Localization: Recreate the Experience with Imagination, Creativity, and Expertise

Kondo’s fame shows us why localization is important. In this article, we will look at localization examples that contributed to her success in the states.

Marie Kondo before her big debut in America

First, let’s look at Kondo’s history and success before her explosive popularity in America.

Kondo has had an interest in organizing since she was 5 years old. When she went to university, she developed the idea of the KonMari method and launched an organizing consulting business.

After graduating from university, she got a job working at commercial services company, Recruit Career Co., Ltd. However, she quickly quit and started to focus more on organizing consulting.

Here’s a brief timeline of her success after starting her own consulting company:

Although Kondo introduced the KonMari method in her book, “The Life-Changing Magic of Tidying Up: The Japanese Art of Decluttering and Organizing” to the English-speaking audience in 2014, she did not become popular until her show “Tidying Up with Marie Kondo” was released on Netflix in January of 2019.

Now, let’s take a look at the localization marketing tactics she used to build her brand in America!

1. Changing the marketing message to cater to American needs

Understanding why users need your product or service is crucial to how you approach potential users. We can see this in the way the KonMari method is advertised in Japan and America.

Generally, the KonMari method helps users in America and Japan in the same way; users are encouraged to only keep the things that spark joy and are taught how to organize the things kept in a way that saves space efficiently.

The KonMari method is perfect for Japanese users who live in small houses and struggle with a limited amount of space. However, an issue as simple as not having enough space is not necessarily a problem in America.

Instead of advertising the KonMari method for small spaces in American homes, KonMari is advertised as decluttering and organizing an overflowing amount of objects in a person’s home or for adopting a more minimalist lifestyle.

By changing her marketing message, she is able to sell the same service to a different audience based on the audience’s lifestyle, needs, and problems.

2. Appealing to the American audience by embracing Japanese culture

Kondo embraces Japanese culture when localizing her brand for the American market. In Japan, Kondo does not need to put an emphasis on Japanese culture. However, for those who aren’t familiar with Japanese culture, the Japanese customs found in the KonMari method may be interesting because it is foreign and new to them.

On Kondo’s Netflix show, she puts a strong emphasis on the philosophy of Zen, which means “meditation” in Japanese, and is also known to be a state of calm attentiveness guided by meditation. Zen Buddhism practices are actually seen as unique points of the KonMari method. This aspect is not strongly emphasized in KonMari media in Japan.

As you can see below the covers of Marie Kondo’s book look very different depending on where you buy the book. 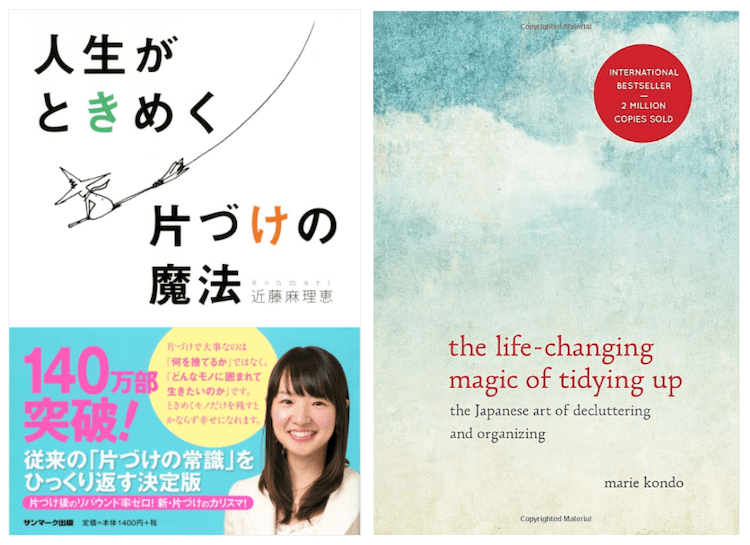 The left is the Japanese version of the book. As you can see, the cover shows a witch on a broom, which in Japan is associated with cleaning, along with sharing a great deal of information at the bottom of the book.

The right is the English version of the book. One of the first things we notice is that the cover of the American book doesn’t have a witch on it. In America, witches tend to be tied to negative thoughts, ideas, and customs. Another thing we notice is the colors of the book. The colors are very light, calming, clear, and fresh—kind of like how a person would feel after cleaning and organizing a room.

The book is actually published in over 40 countries, but each of the books has a different cover design showing that Marie Kondo and her team understand the need to create messaging and images that will resonate with the target audience.

Kondo localized her brand for the American audience by emphasizing Japanese elements such as Zen and calming imagery into her branding, which is something she does not do for her Japanese audience. In this way, she shows that she understands her American audience, which makes her brand more relatable and appealing.

3. Blending American and Japanese styles in the brand

Kondo’s physical appearance in how she dresses and carries herself has played a key part in her branding. By keeping it consistent and clean, many are able to identify her quickly. Let’s take a closer look at the character she has created for her brand.

We’ll start with her physical appearance. Kondo’s appearance always looks very clean and put together. One of the ways she achieves this look is by including something white into her appearance, which is associated with purity and cleanliness in both American and Japanese cultures. For example, Kondo always wears at least one white piece of clothing. She even told The New Yorker that she does it because it’s part of her brand.

When she was in Japan before becoming famous in America, she would wear black clothing from time to time, but since she became popular in America, we noticed that she stopped wearing black clothing. We also noticed that there is more focus on her teeth which are very straight and white, something more common in America than in Japan.

Another thing we noticed is that she is always wearing a skirt. She keeps a very consistent figure in this way. Even though wearing skirts is common in both America and Japan, it seems that her clothing style leans more towards Japanese fashion.

As for hair, she purposely maintains long black hair and bangs instead of coloring or highlighting her hair, like many Asian Americans, to make herself look more distinguishable. This is also a stereotypical hairstyle for Japanese women. In some cases, when a person sees black hair, bangs, and white clothing, they may associate the topic or image has something to do with Marie Kondo. 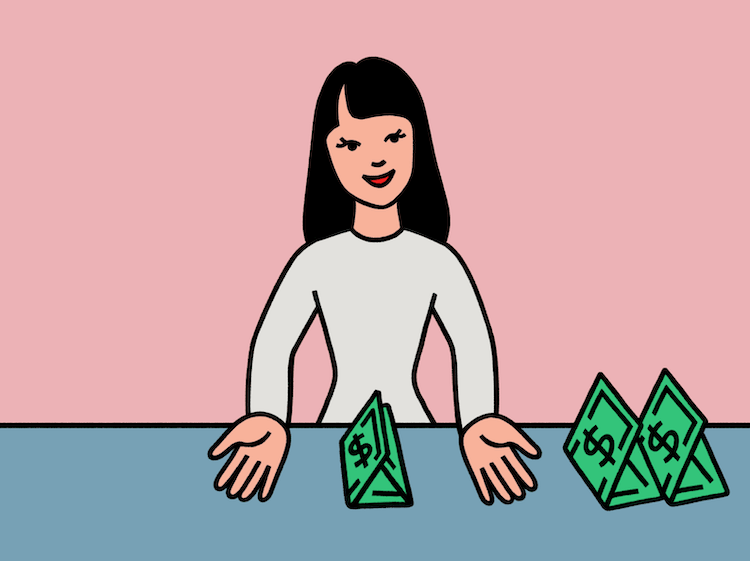 An interesting thing that we noticed is Kondo’s makeup, which emphasizes her character and Asian-like beauty. Prior to her fame in America, Kondo did not wear much makeup. However, we noticed that she wore false eyelashes and eyeliner for her Netflix show, which is a more common look in America. Watching the show we assume that adding makeup to her eyes helps her look more confident and mature.

Looking at the image below, we see Kondo when she was a consultant in Japan and Kondo in one of the episodes of her show. In the picture on the left, she isn’t wearing much makeup and looks very young, while on the right, she looks more mature. Perhaps the makeup helps her look more serious, authoritative, and mature. 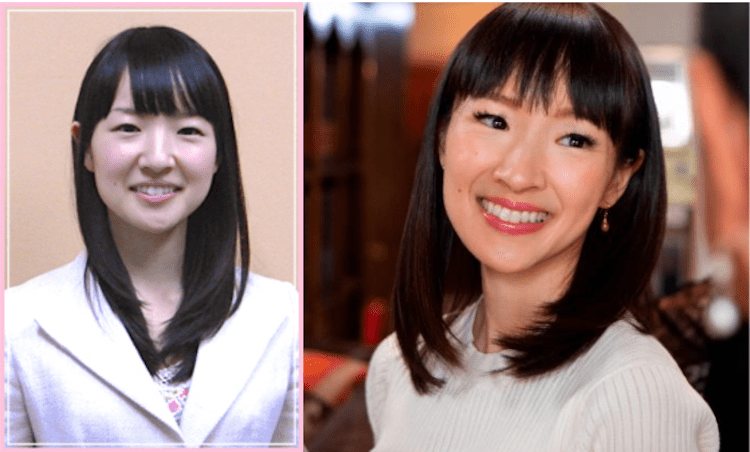 All in all, we think that her style has a good balance of both American and Japanese styles.

Furthermore, when looking at the character she portrays in the media, Kondo is seen to have both cute and goofy behavior. These characteristics resemble that of a cute and animated cartoon character. With this character, Kondo seems less intimidating and more fun and loving, which makes it easier for others to approach the daunting task of organizing their life. You can see an example of her character in the gif below.

As we can see with the KonMari craze, localization is important because it helps your potential customers resonate with your brand and understand the purpose of your products or services. To recap, Kondo localizes three aspects of her brand for the American audience:

Kondo’s localization strategy and skills are impeccable as she flawlessly builds the KonMari Media brand in Japan and America. Her growing success is a show of how important localization is for each market.

Interested in localizing your business for the Japanese market? With an understanding of both Japanese and American cultures, our bilingual team at btrax is here to help. If you would like more information, contact us or check out our services. We look forward to hearing from you!

Did you enjoy this article? Sign up for our newsletter to get more information and insights on Japan!

The ideas illustrated in this article are referenced from the Japanese version of our blog, freshtrax. You can check it out here.