※ This article is English localized version of Japanese article.

At btrax, we’ve been following the popularity of “short videos” in the U.S. and Japan. In case you were wondering, short videos are videos around 15 to 60 seconds in length, some well-known examples are TikTok and Instagram Reels. Along with these, Youtube also offers dedicated short video posting features called “Youtube Shorts”. We see the momentum of these trends continuing to grow.

Data shows that as of September 2021, users in the UK and US have been spending more time on TikTok than on YouTube. In this article, I’ll explain why short videos are so appealing to people, and introduce some examples of innovative services that use short videos.

Why are they attracting people?

Short videos are growing at an astonishing rate. We will analyze the reasons why people are attracted to short videos.

(1) Immersion in the world of video

One of the best features of short videos is their immersive nature; you’ve probably had the experience of watching a TikTok video and not realizing that 30 minutes had passed by.

Short videos are typically 15 seconds to a minute long, so you can concentrate on watching them until the end without getting bored.

On TikTok when watching short videos you can continuously watch one video after another without doing anything as a new video will start playing when one ends. In other words, you don’t really need to use your brain much. For better or for worse, it is a very addicting behavior. 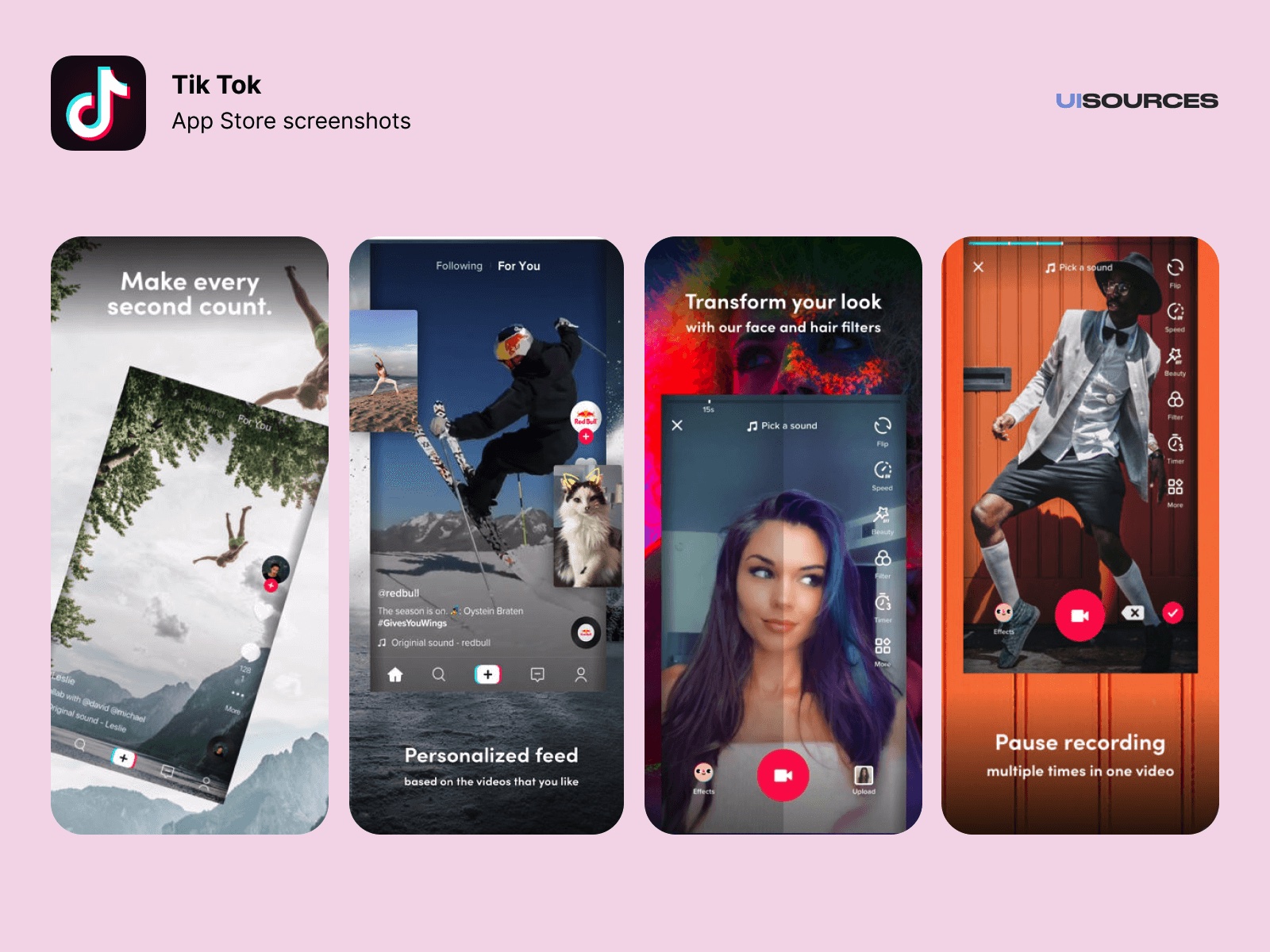 ↑When a video ends, the next one starts playing. Source: https://www.uisources.com/explainer/tiktok-app-store-screenshots

The following is a list of services and advertisements that use short videos in Japan. All of them capture the needs and characteristics of Japanese people.

Mow is a social matching application based on video content and was released in August 2021 by V Chuu, a VTuber management agency. Not only can you meet a partner, but you can also find “friends with the same hobbies” and “like-minded friends”.

The UI is similar to the reel function of TikTok and Instagram, and the purpose is searching for a partner similar to how you would browse a social network. By watching videos and sending reactions to the videos of people you are interested in, you can start a conversation, which is meant to create a flow that is natural and not awkward..

It is also expected to solve the problems of existing matching apps, where you may find it hard to tell the personality of a person from just texts and photos. Through using Mow, they are trying to avoid meeting somebody who isn’t like the person you were messaging with.

The app is also gender-free, and does not have the settings required for most matching apps, such as only being able to select male or female as your gender. Considering its gender-free setting and the fact that it is a service that allows users to post and use video content, it is a service that captures the trends of Generation Z well. 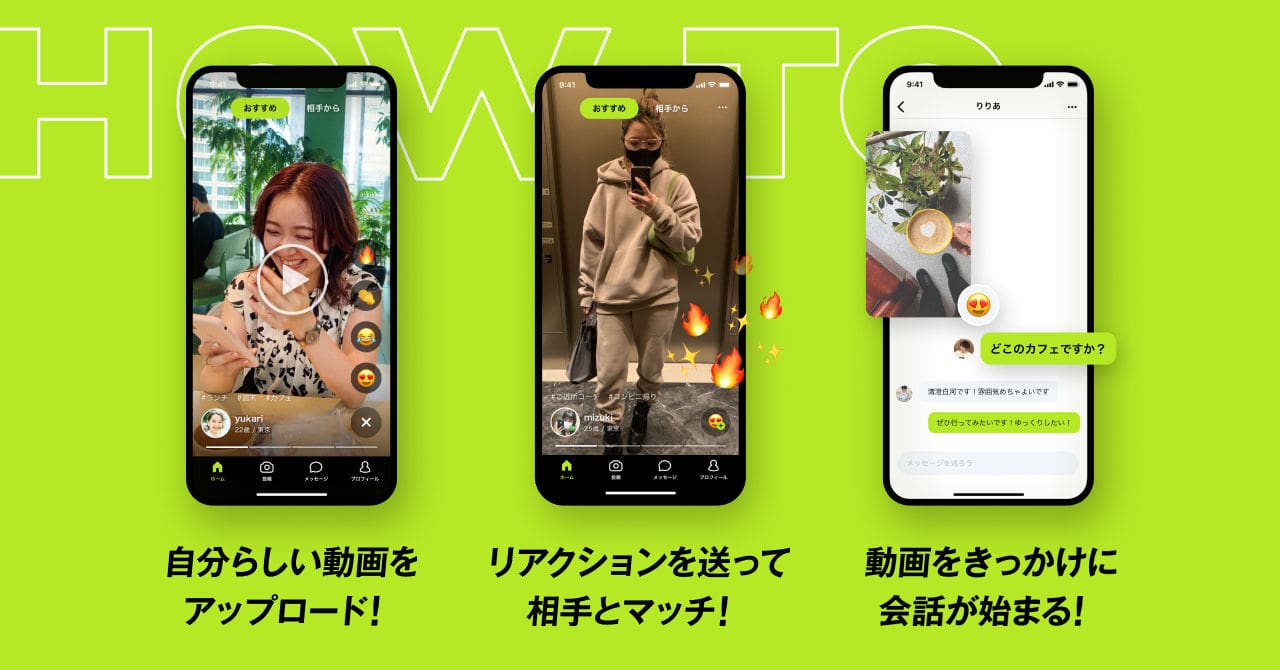 smash. is a short video service created by Yuji Maeda of SHOWROOM and it is where idols and celebrities can enjoy communicating with viewers through live streaming, with the catchphrase “virtual live space”. SHOWROOM, Inc., the service provider, is mainly involved in entertainment businesses, such as live streaming, VR/AR, and media businesses.

The service offers a limited number of original videos by idols, dramas, and documentaries by celebrities that are played on TV and movies.

Yuji Maeda’s inspiration for this service came from his desire to “create a place on smartphones where amazing and inspiring works that can change someone’s life can be created.”

Smash. is a “vertical theater app” that has a similar UI as other short movie apps but with the focus on having content from celebrities and artists from major entertainment agencies. Music producer Yasushi Akimoto and other top creators are involved in the production of the content, and the quality of the content is remarkable. Jump, a popular Japanese idol group, and BTS, a KPOP artist, are among the groups that actually distribute their content using smash.

The fee for smash. is 550 yen (~$5 USD) per month in the form of a subscription. While other short video services are free, you may wonder why smash. is chosen when you can watch original content by celebrities on other video services such as Youtube, no matter how professional the work is.

In Japan, there is a culture of fervent support for celebrities where they attend live concerts, invest in merchandise, and some even buy over 100 CDs just to get the handshake ticket, included in the CD.

I think there are two main reasons why they would want to use this service.

From the point of view of an ardent fan, this app is a revolutionary service that allows you to watch exclusive videos of your “favorites” for about $5 USD a month. It is a service that truly captures the needs of Japanese fans who want to feel closer and engage with the musicians and celebrities they follow. 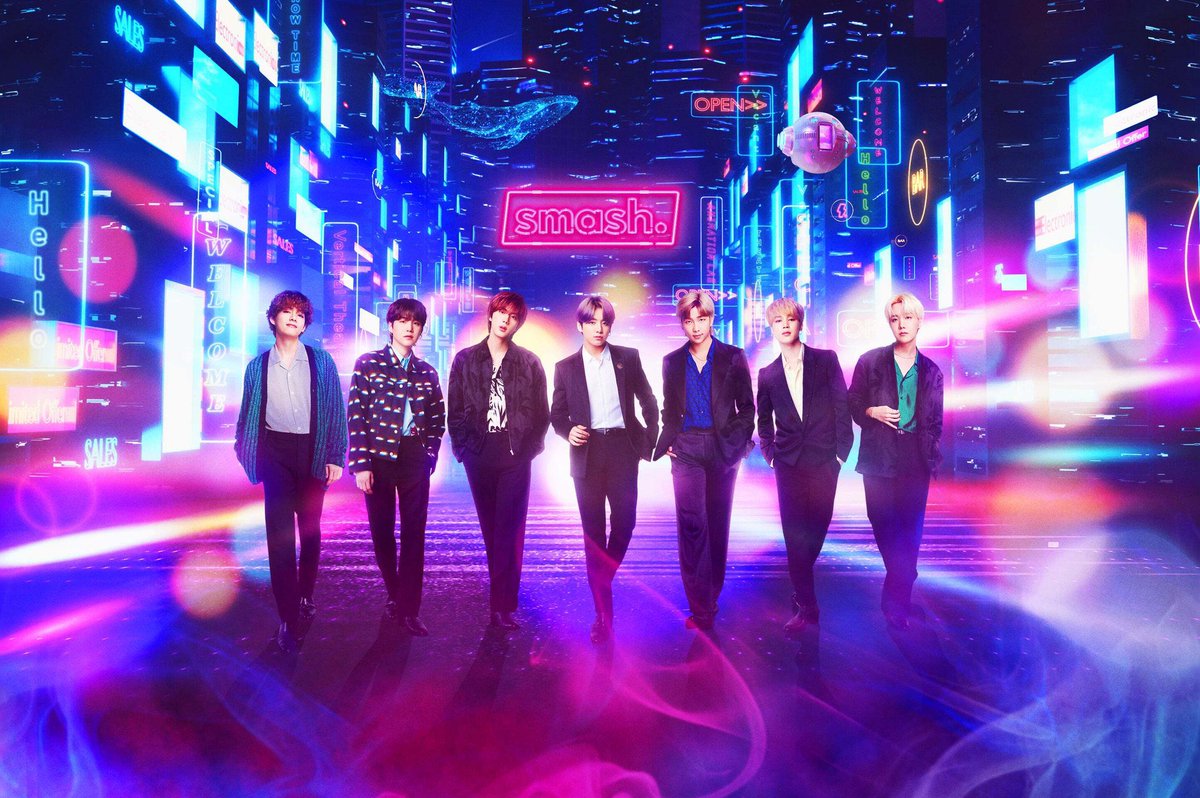 A Youtube ad in Japan, which lasts for a total of one and a half minutes, is an animation with a touch of manga. It is structured in such a way that you can’t help but be curious about the development of the story and watch it until the end.

The most prominent services advertised in this way are hair removal, slimming beauty treatments, beauty supplements, and hair thinning treatments. These are targeted at both men and women, but what they all have in common is that they are relatively expensive services or products. Since the barrier to purchasing services or products that may be quite expensive, advertisers need to create a connection with the consumer convincing them they need the product or service. So how do you make people feel like they have to do something?

The story of each anime appeals to Japanese people’s psychology of “anxiety with being different from others” by saying “everyone is thin but I am fat” or “my friends are getting hair removal but I am not”. We understand that the psychology around doing something because everybody else is doing it is nothing new but with Japan being a collectivist society, there’s even more pressure to not stand out. 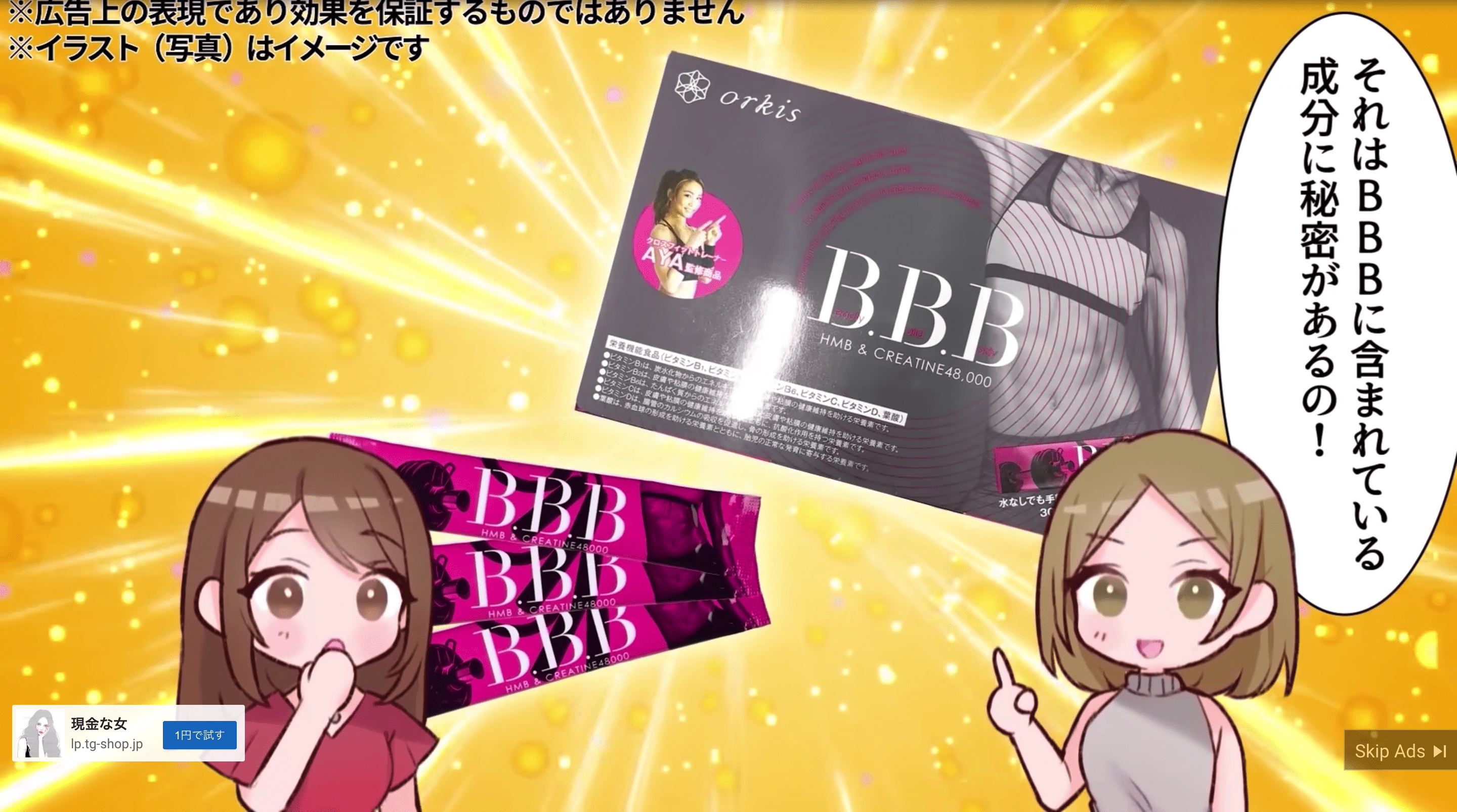 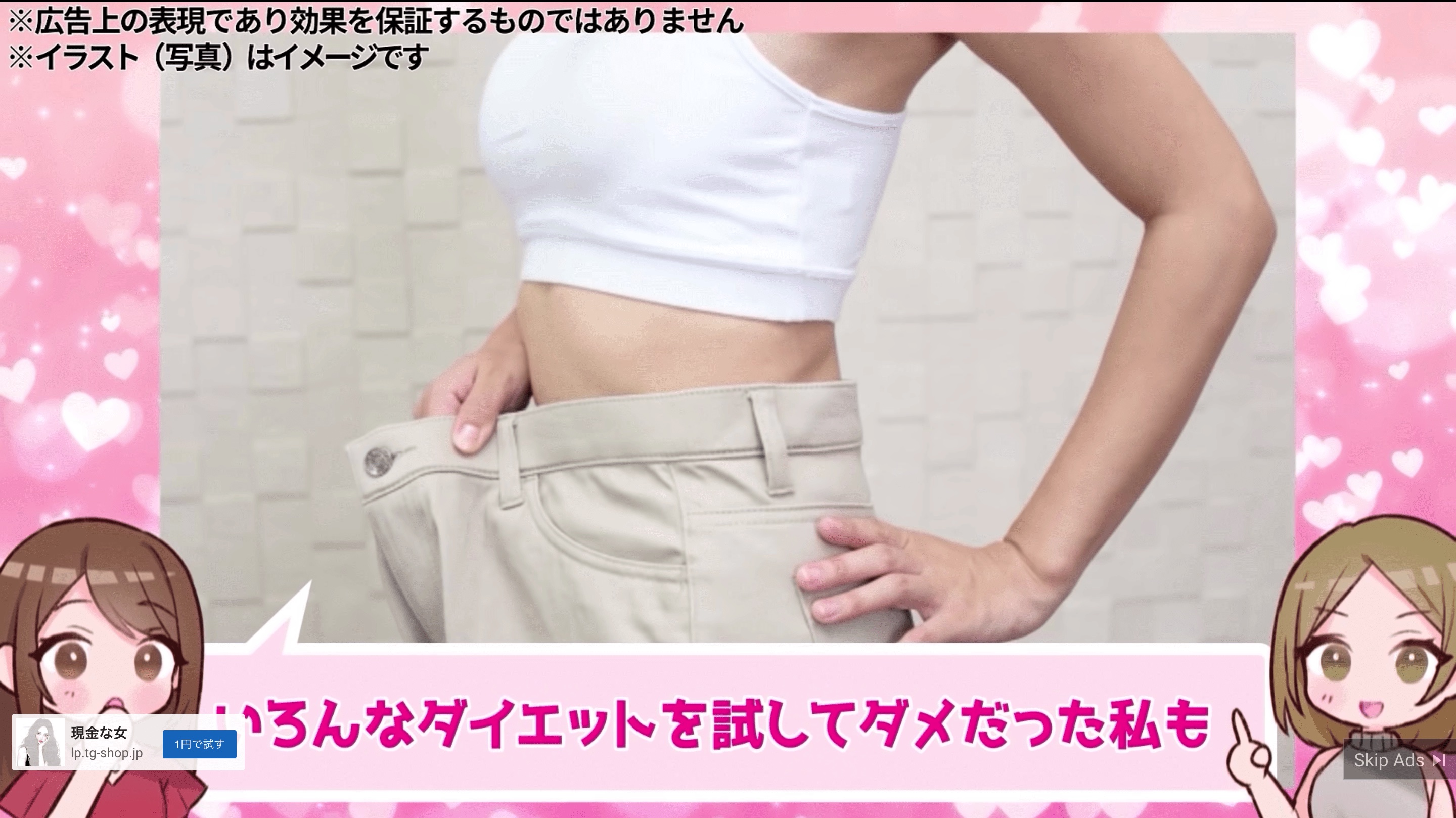 To emphasize how Japanese people are more sensitive to “being different” than other countries, we’d like to share the “sinking ship joke” you may have heard of.

A passenger ship was shipwrecked and was on the verge of sinking.
There was a “typical” Englishman, Italian, American, Frenchman, Japanese, and German on board. In order to lighten the ship as much as possible, it was decided to ask as many passengers as possible to jump into the sea and swim to land. Of course, no one wanted to jump into the sea.

Now here’s the problem. What should you say to the guests from each country to get them to jump into the sea? For example, to get an Englishman to jump in, you might say, “If you jump in here, they’ll say you’re a real gentleman!” The English have a “weakness” for the word gentleman.

Now, try to think of what will convince Italians, Americans, French, Japanese, and Germans from other countries to jump in.

The answer to this question specifically for Americans and Japanese is:

To Americans: “If you jump in here, you’ll be a hero!”
To the Japanese: “Everyone else is jumping in!” 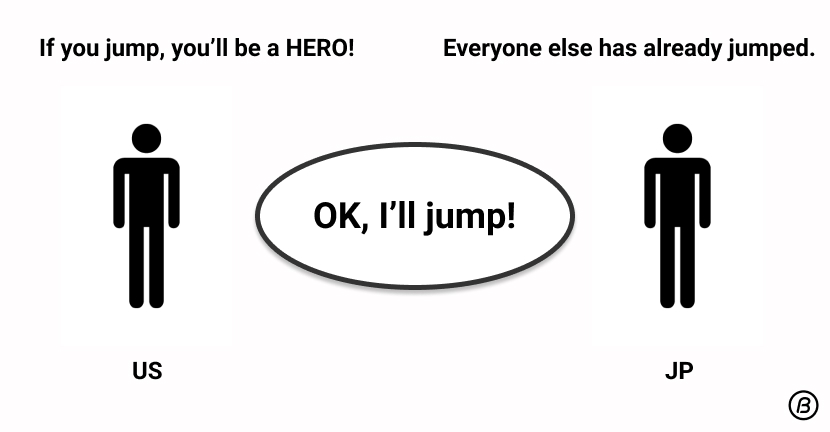 While this type of video advertising focusing on “everybody else is doing it” is still popular in Japan, there is a movement to change it. This is because while it may be effective in increasing advertising effectiveness, it is usually not healthy messaging.

Not only does this type of advertising instill an image of what one should look like, but it also has the potential to make the viewer feel uncomfortable. It is important to keep in mind that different individuals have different standards of beauty, and we need to be very careful to create stories that will not offend anyone.

If you are developing a service for another market, including Japan, it is important to understand the characteristics of the users and the market, and make a positive appeal to them, which can be the key to localization.

In both Japan and the U.S., services using short videos are expected to expand further in the future. The services introduced in this article are good examples that have gained popularity through understanding the needs of Japanese users in particular.

At btrax, we support companies entering the Japanese market. We can provide multifaceted design research, including Japanese service research and interviews with local users.