Japan has historically been known as a cash-based society. But in the last few years, there has been an uptick in the usage of credit cards as the Japanese get more comfortable with the idea of cashless payment methods and COVID-19 sped up a shift to purchasing products online.

Three main occasions to use cashless payments in Japan

When we say “cashless” in Japan, there are three times consumers would typically use cashless technologies instead of cash. And depending on the occasion, the type of payment is different. 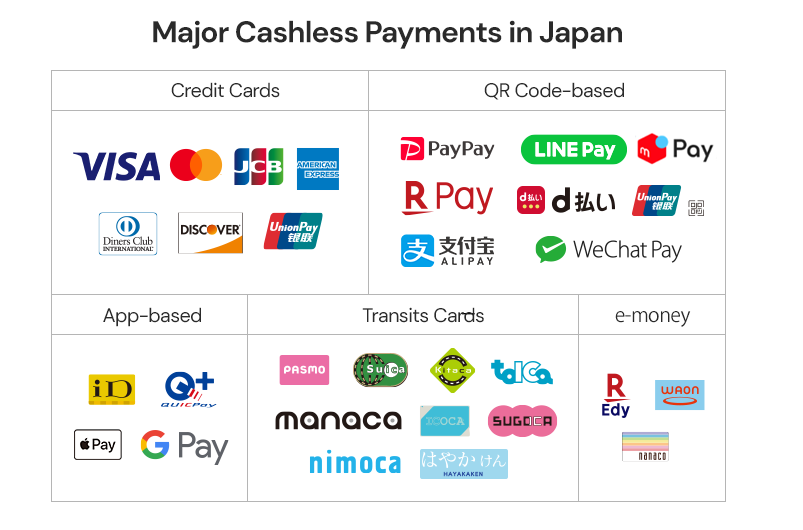 Is cash still the main method of payment in Japan?

In recent years, cashless payments have been promoted in Japan, with the Japanese government planning to double cashless transactions to account for 40% of consumption by 2025. But I think there are still many people who mainly use cash, with many people having security concerns with using cashless technologies.

That being said more and more people are choosing to use cashless payment technologies due to benefits such as point accumulation and ease of use.
As we look at Japanese society today, we dive deeper to answer the question, “Do people in Japan mainly use cashless or cash?”

To find that out, we gathered research from multiple sources such as NaviNavi-Hoken and Dentsu.

The first research was conducted with 560 people in Japan ranging between 20-79 years of age. Survey questions included, “When you go shopping, do you mainly use cashless or cash?” and “Why do you use that method?”

The results were broken down into different types of cashless payments, cashless usage by age groups, and reasons for their preferred payment method.

Some highlights from the research include: 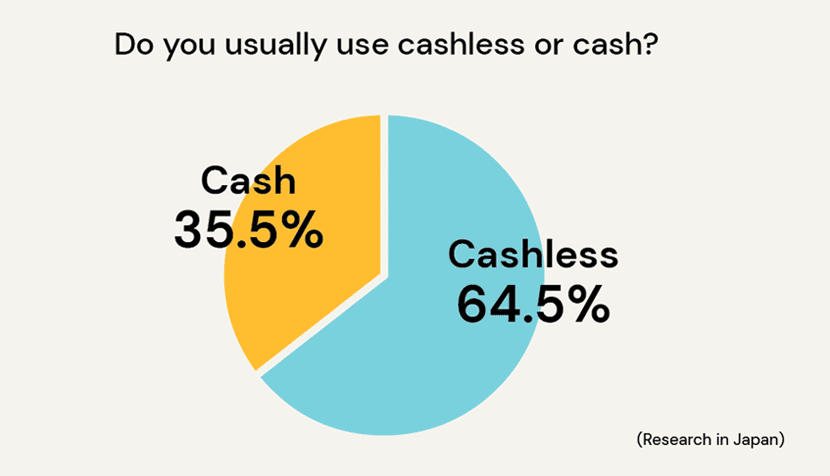 In response to the question, “Do you usually use cashless or cash when you shop? 64.5% of the respondents answered “cashless” and 35.5% answered “cash.”

They use cashless payments at train stations, online stores, and physical stores.

People use cashless to earn points, and because it is easier to pay bills 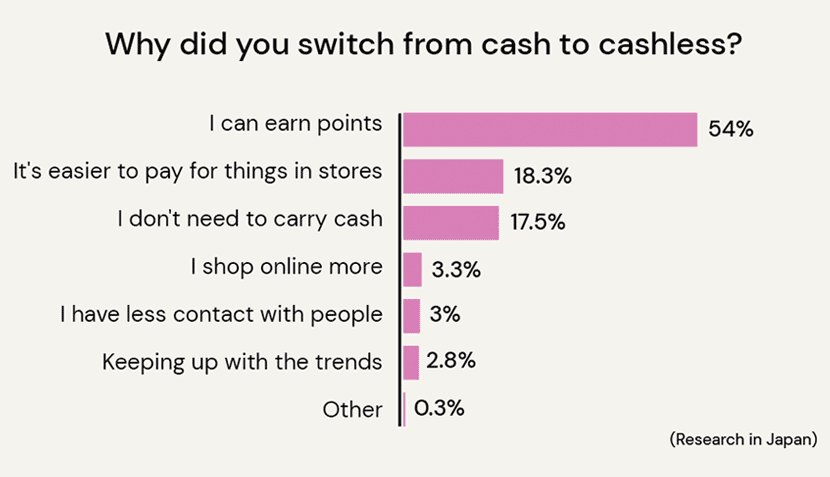 The most common reason given by those who mainly use cashless payments was that they can earn reward points.

The next most common answers were, “Not needing to carry cash” and “It’s easy to pay for things at stores”.

People use cash because they are used to cash, and they find it easier to manage

The most common reason given by those who mainly use cash was that they are used to using cash.

The next most common answers were, “Cash is easier to manage” and “It’s too much trouble to switch to cashless”.

The higher the annual income, the less usage of cash 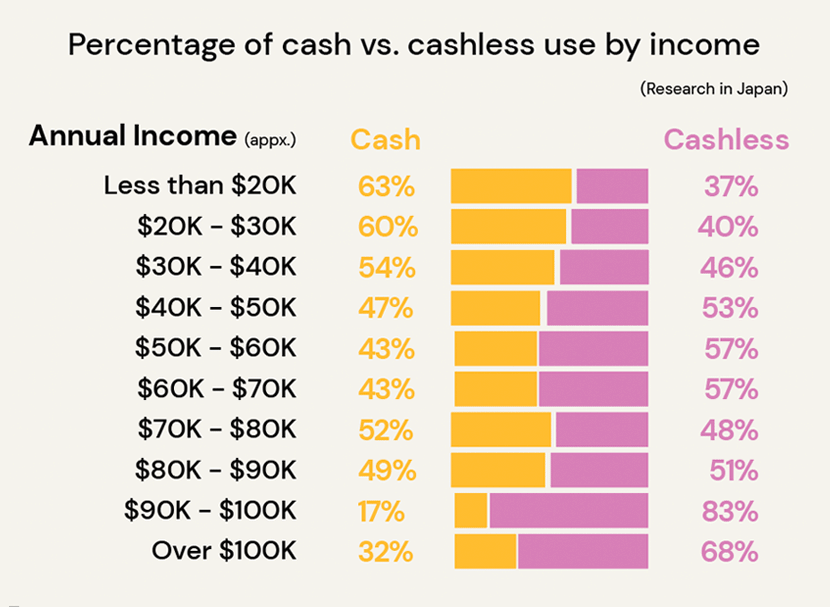 Next, we investigated the correlation between income and the use of cashless payment technologies.

The results showed that the higher the annual income, the more usage of cashless payments.

We believe that people with higher incomes are more likely to be financially literate and use cashless systems that earn reward points. 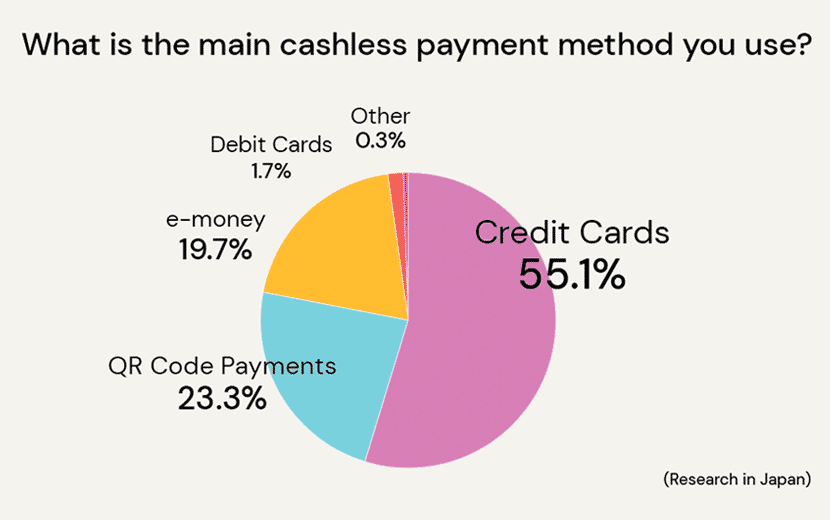 When looking into the types of cashless payment methods people usually use, we learned that 55.1% of the respondents answered: “Credit card”, followed by “QR code” at 23.3%, and “Electronic money” at 19.7%.

Many people may not feel comfortable with app-based payments due to security concerns.

No bias by age among those who use cashless

This next statistic may surprise you as we usually think of the older generations to be less interested or open to new technologies.

We sorted the survey results by age and learned that there was no correlation between age and the adoption of cashless payment technologies.

We initially thought that younger people were more likely to use cashless, but it looks to be pretty evenly distributed, regardless of age.

It’s likely that the number of elderly people who stayed at home increased due to the pandemic with many of those people shifting to online shopping.

25% of respondents plan to go cashless in the future 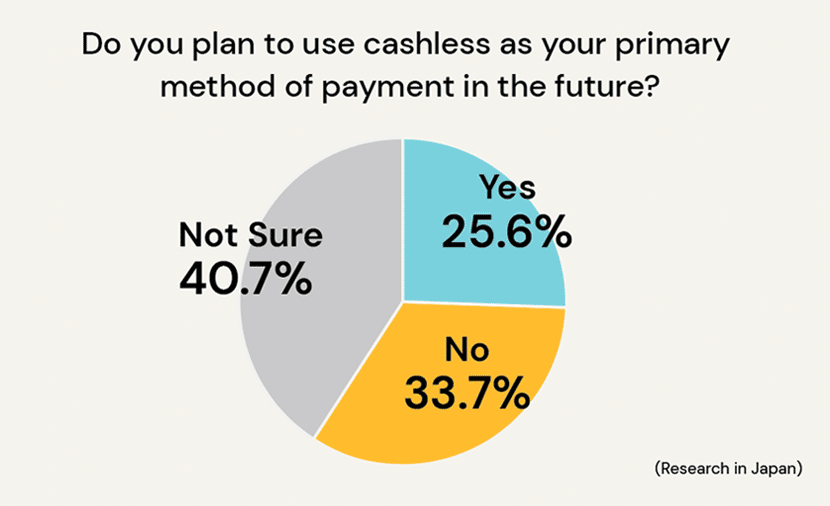 We surveyed those who answered “I usually use cash” to find out if they would be switching to cashless in the future.

As a result, 74.4% of the respondents answered “don’t know” or “no”, and only 25.6% answered “yes”. Here are some reasons why people would or would not be switching to cashless payment methods:

Reasons to switch to cashless

Reasons NOT to switch to cashless

Reasons for “not sure”

The main concerns are security and overspending

People who mainly use cash are mainly concerned with security and overspending when it comes to cashless. As a matter of fact, in Japan, cashless security issues have been in the news.

Some people are a little uncomfortable with the idea of linking an app to their bank account.

Another factor for people using cash is that there are only a few stores that support cashless payment methods. Recently the number of places that accept cashless payments has been increasing, and cashless can be used in more and more places across Japan.

While you are able to use cashless payment methods in chain stores and restaurants, smaller local establishments may still only accept cash.

Here are some examples of where cashless payments are now accepted:

The effect of COVID-19

COVID-19 has clearly shifted people’s purchasing habits in Japan with many not only shopping online for consumer goods but also increasing usage of food delivery services.

This change in people’s lifestyles has sped up usage and comfortability with cashless payment methods.

The below survey results show that cashless technology awareness is higher compared to before COVID-19, thanks to the benefits of point rewards, various discounts, convenience, and efficiency, along with the growing awareness of social distancing.

About 50% of respondents said that the ratio of cashless payments to the usage of cash when buying products and services has increased since the emergency declaration in March 2020.

The breakdown of the people who answered “Yes” is:

It will be interesting to see what happens with consumer purchasing habits post COVID-19. Two main reasons for switching to cashless are 1. More stores support it, and 2. Because they are contactless.

Social distancing contributes to the increase of cashless payments 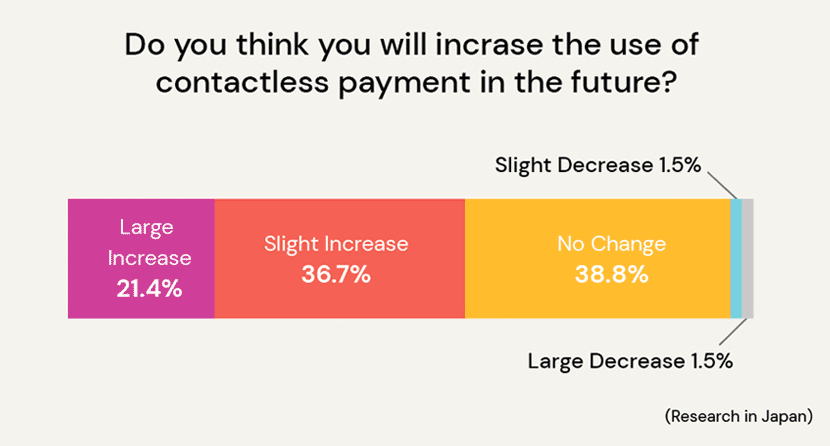 About 60% of the respondents answered that they think they will increase the use of contactless payments in the future. Growing awareness and the need for social distancing is one of the main reasons.

Cashless payments will be the next big thing in Japan

The data clearly shows that Japan is shifting rapidly from its traditional cash culture to a cashless one due to the pandemic.

Another big reason people will go cashless will be the benefit of contactless payment terminals as people continue to social distance.