During my 31 years in Japan as an advertising executive and marketing consultant, I have seen many businesspeople acknowledge that Japanese companies do not understand marketing. As a result, marketing does not have a core function in the Japanese business model, and plays only a small role in corporate decision-making.

Unless Japanese companies urgently embrace marketing, they risk becoming (even) less competitive in the global marketplace. The Japanese electronics industry, hit hard by Apple and South Korean brands, should serve as a warning to other Japanese industries.

Why is marketing so important?

Drucker’s above premise would be a surprise to most Japanese CEOs. They would replace the word marketing with the words engineering and manufacturing.

There are three reasons Japanese companies struggle with marketing:

In English, the word marketing in the currently used sense is only slightly over 100 years old. In the Japanese language, there is no direct translation for the word or concept. It is spelled via katakana characters (Japanese phonetic alphabet for non-Japanese words) and, as a result, is instantly seen as a foreign word or concept. Over the years, a number of people have given me kanji they believe translate to “marketing,” but in fact have translated to “market research” and “sales promotion.”

It has become clear to me that for nearly all Japanese, marketing cannot be comprehended by the word itself or explained in the way Westerners have come to understand it.

In Japanese, the words mono (thing) and zukuri (process of making) taken together literally mean the process of making or creating things, but monozukuri – a relatively new word in Japanese – means more. Monozukuri combines the desire to produce excellent products with the ability to constantly improve production systems and processes. In Japanese business, the drivers of monozukuri (and of business direction) are product engineers.

During the Edo period (1603-1868) the Tokugawa government created a social order called shinokosho, or the four divisions of society. Samurai were at the top of society because they set a high moral example. Farming peasants came second because they produced food, artisans and craftsman came third, and merchants were at the bottom because they generated wealth without producing any goods. The classes were not arranged by wealth or capital but by what Confucian philosophers described as moral purity.

A parallel can be seen in the structure of modern Japanese companies, where marketing staff are the merchant class, engineers are samurai, and all other company functions are the equivalent of farmers and craftsmen.

Marketing is poorly taught in Japanese universities. Professors do not have academic or professional experience in marketing like their western counterparts. Neither do Japanese companies have marketing training programs. Employees are rotated through the marketing department at some point during their careers; it is not an area of career specialization.

When employees – junior and senior alike – are placed in marketing positions, they have to figure out their jobs as they go along. As a result, there can be an over-reliance on outside suppliers such as advertising agencies. At the same time, few executives and managers have had training in the fundamentals of marketing, and experience gained is rarely retained and passed on to the next person. Thus, a perpetual cycle of marketing mediocrity and lack of professionalism endures.

“One thousand songs in your pocket”

When Sony’s Akio Morita directed his engineers to create the Walkman in 1979, he launched a revolution in the way people listen to music. A little over 20 years later, Apple founder Steve Jobs reinvented the portable music player with his introduction of the iPod.

Jobs launched his game-changing product with the slogan: “iPod. One thousand songs in your pocket.” I imagine a Japanese electronics company, having invented the same product, might have presented it something like this:

“Today we are introducing a new, portable music player called the Easy-Carry XVZ-22R. It weighs a mere 6.5 ounces, is about the size of a shirt pocket, and boasts voluminous digital capacity, long battery life, and lightning-fast transfer speeds. We will be introducing many variations of the Easy-Carry XVZ-22R that incorporate different functions and feature different colors.”

Jobs brilliantly applied Drucker’s marketing premise through a single, simple phrase to brand and establish the key benefit. He did not speak to consumers like an engineer with lots of technical terms and statistics.

Today, Apple is one of the world’s most valuable brands. Meanwhile, Sony, in the post-Morita era, is struggling to figure out its future, especially in the electronics field on which it built is global reputation.

Many American companies have a Chief Marketing Officer reporting to the CEO, acting as a sort of marketing superman. The CMO position does not exist in Japanese companies where marketers are tacticians rather than strategists.

In fact, it’s my belief that an American-style CMO will never work in a Japanese company. A more culturally appropriate solution would be to rename and redefine the function as the Consumer Marketing Office, because Japanese prefer working in groups.

Marketing functions would be divided among a team of executives who would work collaboratively with outside agencies. This would spread out the responsibility and pressure on the function and allow for planned rotations to permit a constant mix of new thinking combined with wisdom and experience. 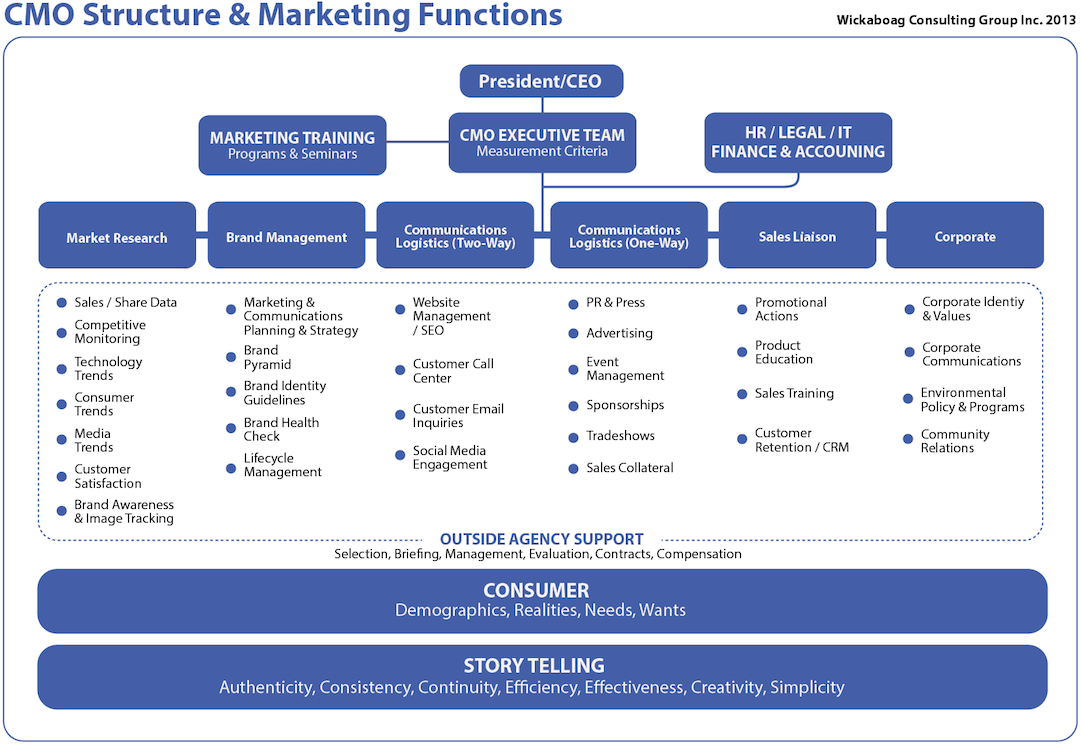 Leading from the front

The future of Japanese business lies outside Japan as its domestic market shrinks and ages. Japanese CEOs and their management teams must figure out the best way to adopt the Consumer Marketing Office.

Embracing marketing as a core function of the business does work in Japan. Over the years, Coca Cola, P&G, McDonald’s and many other American and European companies have entered the Japanese market with entirely new brands and product categories (with cultural adjustments) and were accepted by Japanese consumers.

The companies recruited and trained Japanese managers in their marketing methods with great success.  Many of these Japanese marketing professionals have tried to jump-ship to traditional Japanese companies with the ambition of applying their marketing knowledge and skills, but most have only experienced frustration and regret by hitting a brick wall of resistance for reasons noted above.  What a tragedy.

A few Japanese companies like Nissin Foods, Calbee, Uniqlo and Rakuten have progressive CEOs who understand the importance of marketing as a core function of the business, and have fully embraced it by adopting American-influenced marketing systems. This has allowed them to successfully expand their businesses globally.

Japan needs more CEOs to be marketing champions, serving as examples to the Japanese business community that marketing can help Japanese companies maintain or regain innovation leadership, and increase the value of their brands.

If Japanese companies cannot shift their thinking, a 21st century remake of Hollywood movie The Last Samurai might be titled The Last Engineer. A man of great moral purity … but few customers.