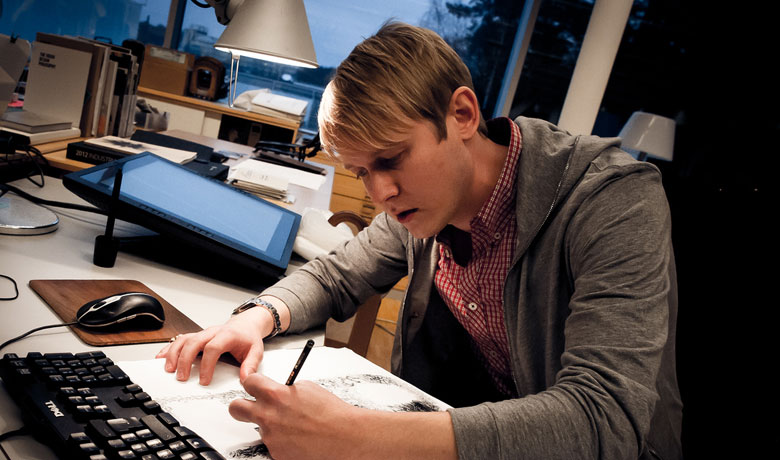 What is the Role of a Designer?

Designers work in a multitude of fields, from fashion, architecture and graphic design to web and user experience. While the specifics of actual jobs may vary by field, the work of “designers” share many essential features.  However, the common impression of the typical designer can differ greatly from reality.

Let’s take a look at the real work of designers, the skills required, and the differences in designers’ environments in the US and Japan.

The Designer’s Job Beyond the Drafting Board

Many misinterpret the designer’s work to be simply deciding upon some sort of representation based on an artistic rendering. In fact, that’s only one small part of a designer’s final work product; the real work of a designer involves a process that brings forth the greatest possible outcome despite imposed limitations.

Artistic renderings are a part of the development process of the work of designers, but this is quite different from the work of artists, who freely express themselves in an environment that is, ideally, without limitation.

Designers need not be a specialist in everything to fulfill their role. The designer must be a generalist capable of receiving the most important information from specialists such as engineers or marketers, and decide upon an overarching thread. There are those that may be reminded of confrontations between designers and engineers, but in reality designers are not a confrontational group. Instead, they serve as guides who determine priorities.

The reason this is the designer’s job is related to their role in illustration. As humans, visual perception is incredibly important and no matter how much information comes our way, it is difficult to interpret based on numeric values or words alone. Unless we’re given a visual, we aren’t able to judge things clearly.

For example, if someone were to describe a web page with an 800px minimum variable width creating a sharp image with a blue base color, it doesn’t quite do the trick. Instead, if an illustration of the given information were to be presented in a rough draft, people would understand immediately.

The initial unification of multiple pieces of information and preconditions packed into a proposal is part of the design process. For that reason, the chief designer serves as a guide in coordinating the flow of this information.

It isn’t enough for a designer to simply be a good illustrator, so it is insufficient for aspiring designers to have simply studied illustration at an art school. Presentations skills are a must, and superb communication skills allowing for the free exchange of opinions with a variety of specialists are extremely important.

While there may have been a time when a person graduating art school who only knew how to illustrate could become a designer, a designer today must be able to comprehend the big picture, process a deluge of information, pick up important points on the fly and provide optimal communication through visual media.

Depending on the organization, these roles may be defined in terms of “director” or “producer” but there is no question that these abilities are required of designers generally.

Additionally, the ability of a designer to determine whether a given decision is theirs to make is important. If a designer makes decisions that should be left to their supervisor or client, they would be usurping authority, while if they constantly ask questions about decisions they themselves should be making they run the risk of being thought incapable.

The Importance of Objectivity

Before that, there are extensive objective elements such as functionality and applicability, price and overall impact which intertwine complexly. The formation of these into a delicate balance is a design in itself.

If one could design simply based on good taste it would be the easiest job imaginable. But in actual fact, there are so many elements necessary before reaching the point where a designer’s style comes into play that covering them all amounts to 90% of the overall workload. However, subjective elements are still necessary; in fact, a good sense of design style is what separates the good from the great.

Communication holds the key to success in the design world. It isn’t an exaggeration to say that two-thirds of a designer’s job is communication.

Following these steps, a designer can begin to create solid designs.

Essentially, the first and last parts each hang on one’s ability to communicate. The era when one could sell something simply by creating a good product has ended. It is necessary for designers to think about how to present and relate their creation via marketing, promotion and presentation.

Environmental Differences Surrounding Designers in the US and Japan

There doesn’t seem to be a gap in the abilities of designers in the US and Japan. There are a large number of excellent designers in Japan more sensitive to the intricacies of design. However, when it comes to the quality of the designs as they are actually produced on a global scale, it is true that Japanese design is, to some extent, viewed unfavorably.

Rather than a gap in the quality of designers, this can be attributed to the intrusion of Japanese business structure in creative work.

The ideal design process is one that provides an environment in which the designer’s ideas can flow from start to finish. However, most Japanese businesses tend to focus on organization and debate ideas during meetings.

Meetings are really no more than a place for organizing existing ideas and searching for keywords for already developed thoughts. Even by lining up work product and feeling as if the work was done collectively, these meetings do not result in producing creative elements.

Excellent ideas don’t come from meetings but reside in a more relaxed space. For that reason, designers must, and will, come up with ideas more efficiently in their own systems and environments. If one is relaxed, for example, more alpha waves will result in the flow of interesting ideas. Businesses in San Francisco and the Silicon Valley are particularly aware of this and are building create office environments as a result.

On top of that, organizations in Japan tend to favor the group rather than the individual, so the group squashes the creativity of the designer as an individual, and it’s not uncommon for the concept originally developed by a passionate designer to fall apart.

Despite the many designers in Japan doing excellent and very creative work, it is a shame that their individual gifts and talents are squashed by organizational systems. If the importance of a designer in an organization were to increase and their thoughts valued in society and business, there would be greater capacity for the development of extremely profitable products.

The Importance of the Designer

Going forward, creative work is sure to become more common place. Today, despite the many professions available, creative work seems to be on the rise. Just outside the boundaries of the system, risks are being taken in new ventures. In a creative enterprise, the most important factor is to give life to innovation.

The job of the designer when creating new products is to clearly relay the benefits of a product to the layman and lead them to a proper understanding. There are also cases where a supervisor makes a judgment without the presence of the designer, and this is part of the difficulty of the profession.

Despite putting in thousands of hours into one project, most are sure to end in failure. Nevertheless, in order to create an impact on the world, it is necessary to continue on. The designer, even when not actually designing, must be continually sharpening their insight so that they may regularly contribute fresh ideas.

In that sense, our work can’t be clocked in the normal way. But there are many things only a designer is capable of bringing about and that thought alone is truly exciting. That’s why I believe it is a noble profession.

This article was originally published in Japanese on freshtrax JP.

Photo by: we design volvo