In 2015, btrax released a blog about the top 10 largest Japanese companies in the world. In comparison with the previous blog, this article updates the rankings of the top Japanese companies based on Forbes Global 2000 list. The updated lists showcases the ongoing trends and changes that have occurred to globally influential Japanese companies over the past couple of years. 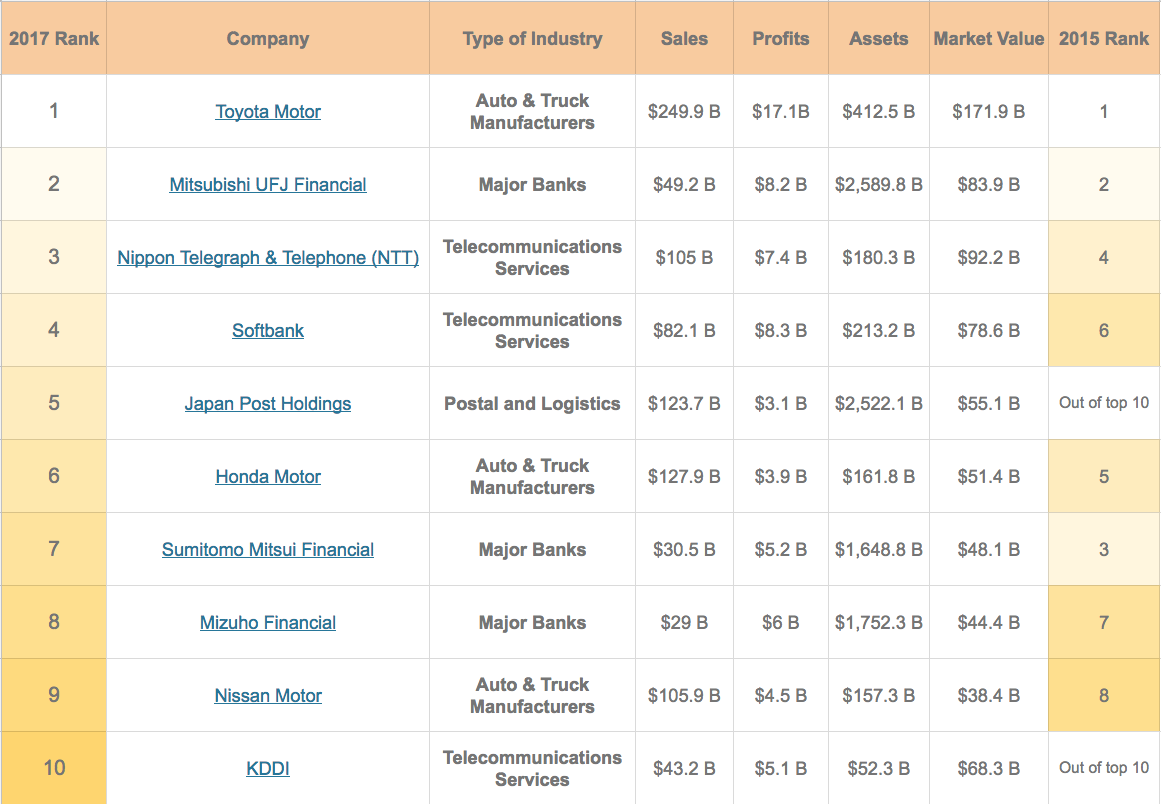 According to the updated list in 2017, the two largest companies, Toyota and Mitsubishi UF Financial, have kept their places while electronics company, Hitachi, fell out of the top ten.

The rise of telecommunication companies partially explains Hitachi’s disappearance from the list but there is the larger issue of decreasing sales revenue on average for Japanese electronics companies. 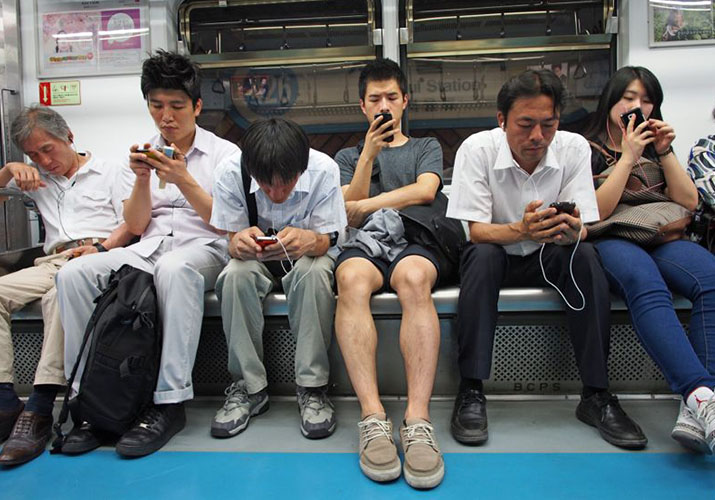 All three of Japan’s giant telecommunication companies moved up the list with NTT taking the lead, SoftBank following closely behind, and KDDI breaking into the Top 10.

The rapid growth in popularity of smartphones has helped telcos to stay in the top 10. According to a report by Dentsu, the number of broadband subscriptions has increased by 6,3057,000 since 2013.

Compared to 2006, the number of mobile subscribers in 2016 has skyrocketed by 65%. In addition, nowadays, over 94% of Japanese population can access to the Internet.

The widespread use of Smartphones helps explain the revenue growth of the three major telecom carriers (see chart below). SoftBank possesses the highest rise in sales, from $28 billion in 2013 to $76 billion in 2015. Due to previously mentioned factors and statistical evidence, the telecommunications trend is expected to grow stronger in the upcoming decade.

The Downturn of the Electronics Business 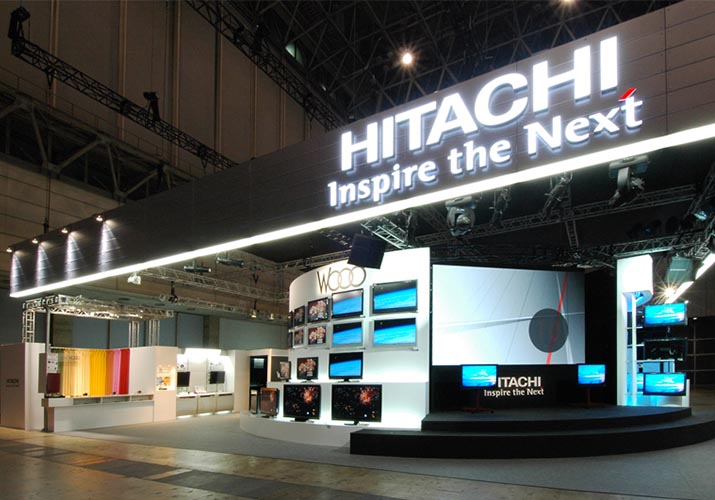 Image | Due to high competition from abroad, Japanese electronics giant like Hitachi fell off the Top 10 list

Hitachi used to be the only electronics manufacturer on the top 10 largest Japanese companies list in 2015. Electronics companies have been hit hard with no companies making the list in 2017.

Although the Japanese electronics industry has the largest consumer market in the world, it has experienced a lot of competition from abroad. Competitors from South Korea, Taiwan, US and especially China, have acquired more and more market share. The popularity of smartphones is also another cause of this downturn.

In the past, Hitachi was known for its advanced and high-quality electronics. However, the main reason for its downturn is the competition have changed their strategies and poured more and more budget into advertising. Hitachi Board of Directors reveal that they could not keep up with its competition.

The electronics business has been in crisis for the past several years and Japanese electronic giants such as Sony and Panasonic have revealed that they have lost billions of dollars a year. 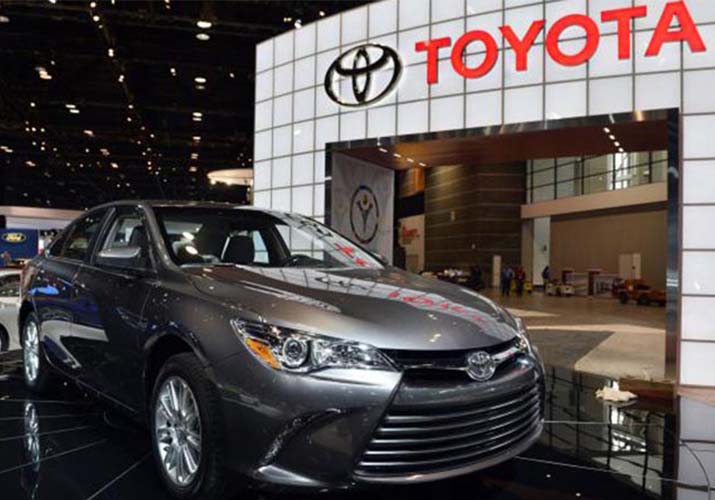 Image | Toyota remains #1 in largest Japanese company in the world

While other spots on the top 10 list has changed, Toyota still remains as the Japan’s largest company in terms of sales, profits, assets and market value.

In 2015, Toyota benefited from the weak Yen, resulting in an increase in sales in the North American market. However, the net profit declined for the first time in five years, from $18.8 billion in 2015 to $17.1 this year. This decrease is expected to continue for the next several years due to the stronger Yen and the current political instability.

Despite the current decline in earnings, Toyota announced its plan to invest $10 billion in the U.S. market to build new plants with the aim to boost production of the Toyota Camry, the bestselling car in the region.

Toyota has long been well-known for its Just-in-Time method, which is based on the principle to produce “only what is needed, when it is needed, and in the amount needed.” This helps Toyota to lessen manufacturing costs and unnecessary waste, resulting in competitive prices and improved productivity.

The production of Toyota vehicles are based on individual orders received from dealers. Then, the process of manufacturing and transportation of necessary parts take place at the same time, resulting in fewer inventory of vehicle parts. 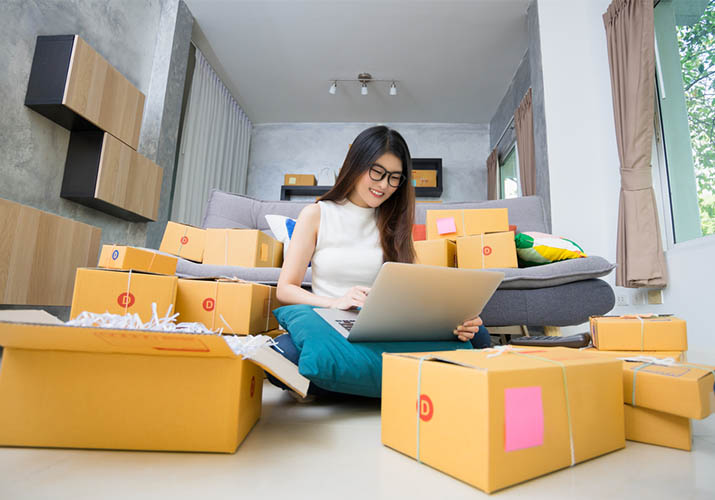 One area to keep close attention to is the postal and logistics sector. Japan Post Holdings came out of nowhere to firmly place itself in the middle of the list, mainly due to the boom of E-commerce. Based on the Ministry of Economy’s report, the Japanese e-commerce market has increased steadily from 2010 growing an average of 11.8% per year.

The three major banks,Mitsubishi UFJ Financial, Sumitomo Mitsui Financial and Mizuho Financial, still remain strong on the Top 10 list this year as they have been for the past many decades.

But the rank of Sumitomo Mitsui Financial and Mizuho Financial have dropped this year, the three major banks posted higher profits in the second quarter of 2017, due to gains through banks’ clients’ investment that offset decreases in lending income and trading operations.