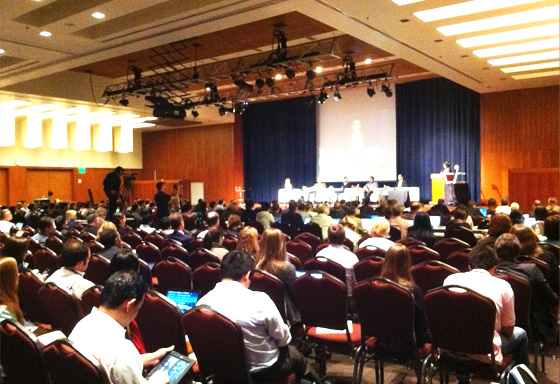 What brought them all together? What does Social-Loco even mean? Converge Lab’s Mark Evans explained with the taglines “Social-Loco: Where the Social Web, Mobile and Local Converge” and here is “Where Brands, Advertisers, and Tech Converge.” Essentially, it was an exploration of how brands are bringing together businesses and consumers with the latest social and local technologies. Here are a few of the key topics covered throughout the conference.

Mobile location technology is far ahead of its “business ecosystem,” as Alohar Mobile’s Founder and CEO, Sam Liang explained, smartphones today are truly “smart,” but the applications built for them have not caught up to the technology, and therefore are not taking advantage of all the available sensors on the devices. His showcase app, Placeme, also launched on Monday to coincide with his presentation, automatically remembers all the places the user visits in a day without having to manually check-in. The “smart” app is able to run in the background persistently and learns behavioral patterns of the user, which later can be drawn from to make personalized suggestions and alerts. And by “smart,” Liang adds, that the app is not only tapping the smartphone’s GPS device, but also its accelerometer to sense the user’s movements, allowing it to recognize a higher level of motion states such as resting, walking, and driving. Liang wishes to further incorporate the other sensors while keeping the app battery-friendly and able to run persistently throughout the users’ day.

With all these fascinating, yet fast-paced innovations, how do investors and acquirers know how to invest in SoLoMo developments? What are the strategies for entrepreneurs and developers to monetize their innovative services? “Reality Check ($$$)” Moderator, Marc Prioleau of Prioleau Advisors put it quite simply: “Distribution first, monetization later.” There are plenty of ways to make money on existing social networking services (SNS), and it only takes a few tweaks to adjust accordingly to the new SoLoMo services. But what’s the point in having a carefully calculated and laid out monetization strategy for a service that has no audience? Here is where branding and integrated marketing, and eventually globalization/localization comes into play.

Once investments are in, what does it take for a SoLoMo to start bringing in seven-figure returns? Panelist in “Show Me the Money,” Groupon’s Mobile Marketing Manager, Iryna Newman gave an insightful tip: “geographically targeted ads outperform behaviorally targeted ads in ROI.” Not only do geo-targeted ads cost less to operate, it also yields higher returns. In the end, implementation of both are important in gaining users as making algorithmic decisions on how far a user is willing to travel to purchase certain deals.

Appropriately titled “Privacy is Dead: It’s the New Social Contract and You Agreed to It,” the first panel discussion in the afternoon made everybody think twice about the information we volunteer to the cyberspace. Privacy settings on Facebook has had many users confused and frustrated each time there is a major update, and concerns on personal privacy is at an all-time high. Moderator Hermione Way, founder of Newspepper.com really got the audience engaged, and even a panelist enraged with an assertion that social networking applications with location services “like Facebook and Banjo” has lead to incidents of women being stalked and even raped. Banjo’s Founder and CEO, Damien Patton rose to the accusation, spitting out “the Catholic church has hurt more people than all SNS combined,” getting the crowd to “Ohhhhhh…” in synchronized excitement. Patton gathered himself quickly and added on behalf of his fellow panelist colleagues that “companies should give the users control,” and ultimately, it’s the users who are in fact using the SNS, not the other way around.

All in all, with everything around us coming to a convergence, our lives are about to become simpler, yet more enriched. We’ve reached a point in technology that it’s very difficult to make a prediction even only five years into the future. So, stay tuned and don’t miss a beat!