From 2011 to 2015, Japan’s inbound tourism grew by 33 percent per year, among the fastest growth rates in the world. However, the tourism industry in Japan still has a long way to go as it only represents 0.5 percent of the country’s GDP. In comparison, the same statistic is 2.4 percent for France and 1.3 percent for the United States.

In 2020, Japan will host the Olympics and further propel the country as a holiday destination, promoting their culture and landmarks to a large international audience. Last year, we discussed the potential of Japanese outbound tourism and how that can benefit international tourist destinations. This article will focus on inbound Japanese tourism and the challenges they face in managing and encouraging growth in the next few years.

The Japanese government has set an aspirational target to double the number of annual inbound tourists from 19.7 million in 2015 to 40 million in 2020. This ambitious goal shows the recognition of tourism as a major future driver of economic growth in Japan. 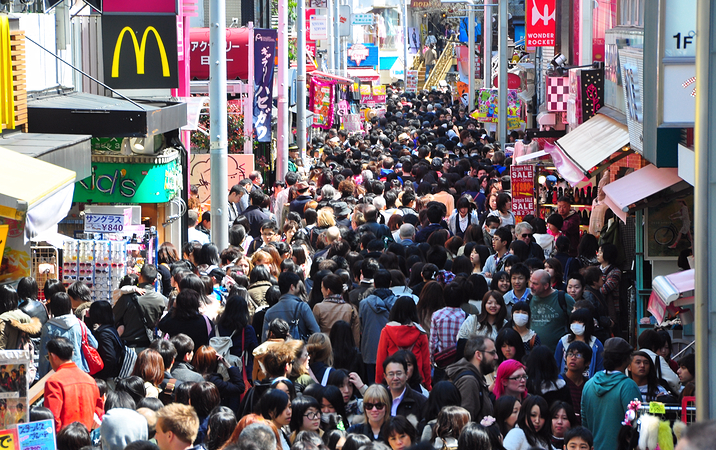 While the aforementioned goal isn’t impossible to achieve, a few problems must be addressed in order to reach it by 2020. An October 2016 report by Mckinsey recently raised the following three themes as the most prevalent in terms of visitor trends and patterns in Japan.

In 2015, East Asian visitors from China, South Korea, Taiwan, and Hong Kong accounted for 72 percent of the inbound tourists visiting Japan. This number is set to increase due to the growth in inbound Chinese tourists, and as a result, East Asian visitors will account for 78 percent of Japan’s inbound tourists by 2020. Other popular tourist destinations like Thailand tend to have a more diversified visitor portfolio, with a higher percentage of tourists from outside their own region.

This lack of diversification and dependency on Chinese tourists poses risks to Japan’s tourism industry, as they are vulnerable to sudden shifts in behavior and preference. A change in political environment (such as the ease in acquiring tourist visas) can disrupt the tourism industry significantly.

In order to combat this, we first have to consider where exactly non-Asian tourists are falling off in the “Japan visitor funnel” (see diagram below). Japan converts well above average when it comes to tourists being “willing to revisit” – this is true across the board. However, potential tourists from Australia, the US or the UK tend to drop off when converting from  “consideration” to “visit” – which means that many of them think about visiting Japan one day but never actually do it. 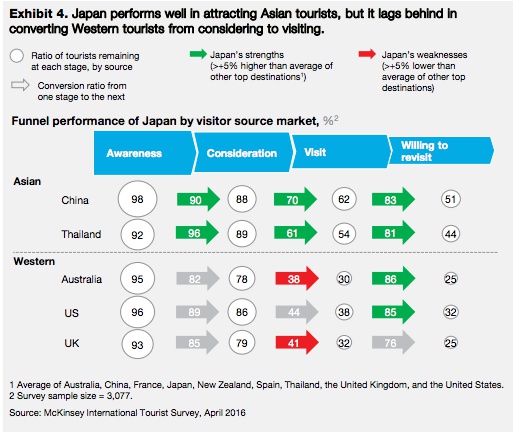 Why is there a large conversion gap between people considering going to Japan and people actually going? Japanese stakeholders within the tourism industry believe it’s due to the lack of infrastructure or the language barrier, but these things aren’t factors that people experience until they visit the country.

When it comes to affordability, only 31 percent of those surveyed in Australia, the US, and the UK saw Japan as such, compared to 57 percent for Thailand. Although the cost of living is indeed lower in Thailand, another major factor contributing to this is the lack of low-cost options available on global booking sites.

The average price of available Japanese hotels on Booking.com, for example, was 37 percent higher than those available on Japanese booking site Jalan. The lack of range in options may contribute to the perception of unaffordability in Japan. One potential reason why cheaper Japanese lodging options may not be available on global booking sites is the lack of English language resources or staff.

To tackle this, the government would need to provide assistance to accommodations to help them hire English speaking staff or create an English version of their website, as well as provide their hotel information on English booking sites.

When it comes to foreigner awareness of Japan’s major landmarks, only Mt. Fuji, Japan’s national icon, received over 50 percent awareness. Other landmarks received much lower scores.

For example, only 9 percent of those surveyed were aware of the Kamakura area – home to many historic temples and the Great Buddha – located just one hour from central Tokyo by train. However, once informed of the area’s attributes, 42 percent of survey respondents said they would travel to see it . This gap suggests that Japan’s major tourist destinations have high potential to draw more tourists, but a major obstacle is a lack of awareness. 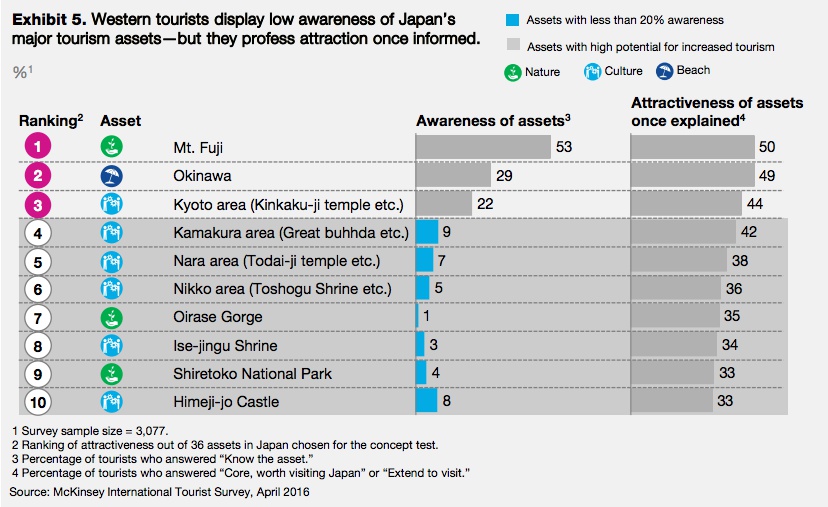 To combat a lack of awareness, the government can spend resources on improving their official tourism website and Facebook fan page visitors into tourists. On Facebook, the Japan National Tourism Organization’s fan page only has 0.4 million “likes,” while a similar page for other countries has far higher numbers: the United States has 5.4 million, New Zealand has 2.2 million, and the UK has 3.1 million.

Currently, among Western tourists, 83 percent say they would revisit the country again in the future. Despite this, Japan doesn’t collect feedback in a structured way or harness this goodwill to promote tourism. Collecting this feedback to use for promotion of Japan’s tourism assets can help spread word of mouth and convert potential tourists from the “consideration” part of the funnel to “visit,” especially if the word of mouth comes from someone similar to them.

A staggering 48 percent of tourist stays are only in and around the major cities of Tokyo, Kyoto, and Osaka, which account only for 28 percent of the entire country’s GDP. These three major cities also receive 60 percent of all inbound tourist expenditures. This shows an uneven distribution of the economic benefits of increased inbound tourism and suggests significant untapped potential outside of Japan’s top urban areas, which includes smaller cities as well as suburban and rural areas.

One major issue when it comes to attracting tourists outside of major urban areas is the lack of basic infrastructures, such as online and English operations – and the clear way to combat this is to systematically provide local governments with these resources.

Japan is a supply-constraint market in terms of accommodation. As of right now, open hotel rooms and other forms of accommodation like Airbnb are already stretched thin in terms of rooms available. At the current rate of growth (factoring in both the growth of inbound tourists as well as new hotel developments), by 2020, Japan will face up to a 50 percent shortage in accommodation in Tokyo, Kyoto, and Osaka, and up to a 30 percent overflow in air capacity in Tokyo’s two major airports, Haneda and Narita.

At the current rate of growth (factoring in both the growth of inbound tourists as well as new hotel developments), by 2020, Japan will face up to a 50 percent shortage in accommodation in Tokyo, Kyoto, and Osaka, and up to a 30 percent overflow in air capacity in Tokyo’s two major airports, Haneda and Narita. 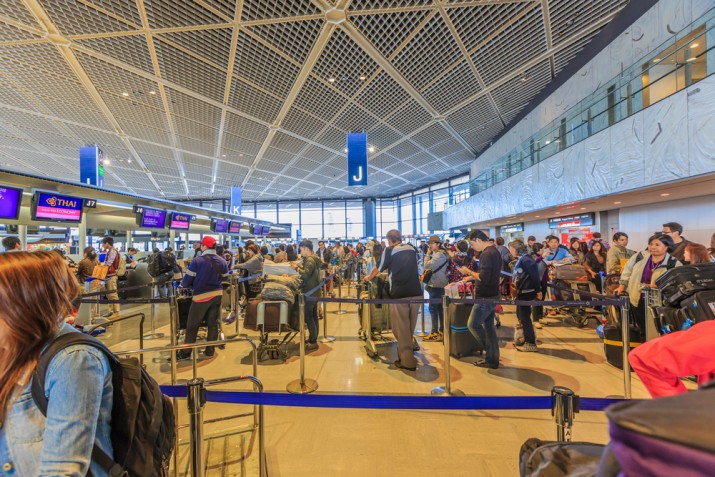 In order to combat this, the Japanese government has been proactively working on various initiatives, such as easing regulations on vacation rentals of private residences through services such as Airbnb. Developers are also currently working to construct multiple high-end luxury hotels outside of major areas. Floor-space requirements and restrictions for buildings have also been eased to encourage more development.

Airports are working to increase the capacity issue. Haneda and Narita will expand capacity by a combined 80,000 flights per year by 2020. Regional airports will also waive a portion of current landing fees to encourage low-cost carriers to open new routes.