Emojis are everywhere. They’re a regular part of our digital conversations with friends and family, and you’ve probably noticed their more regular appearance in brands’ marketing and communications. Emojis are emerging on billboards, in emails, and social media posts as companies capitalize on the ability of emojis to generate higher engagement across the board (social media interactions, open rates, click-through rates, and conversions).

Incorporating emojis into your marketing strategy in Japan can be highly effective. Appropriate use of lesser-known, more culture-specific emojis, can really connect with potential customers. But with over 3,000 emoji characters in the Unicode Standard to choose from, how do you know you’re choosing the right one to support your messaging? Whether your marketing efforts are global or specific to the Japanese market, selecting the appropriate emoji can be the difference between a homerun and a PR nightmare.

Do you know the difference between these two emojis?

The emoji on the left means “hospital.” The one on the right? You might deduce the H stands for hospital, and the heart represents a loving “get well.”

In actuality, the emoji on the right means “love hotel,” a type of hotel that exists solely to provide couples a place to have sex. The misuse of emojis reveals a lack of cultural understanding that, best-case scenario, provides the customer a good laugh at your expense or, in the worst-case, offends them and turns away a potential customer permanently.

Understanding the origins of emojis

Emojis originated in Japan to facilitate communication between Japanese people. “E” （絵）means “images” and “Moji” （文字）means “character.” The first widely-used set of emojis was introduced in 1999 as a part of messaging features of “i-mode,” one of the very first mobile internet services developed and provided by the Japanese mobile operator NTT DOCOMO. Shigetake Kurita, known as “the father of emoji”, created the initial set of emojis to enable easier digital communication. The original DOCOMO emojis were drawn on a 12×12 pixel grid and were much simpler than emojis today. 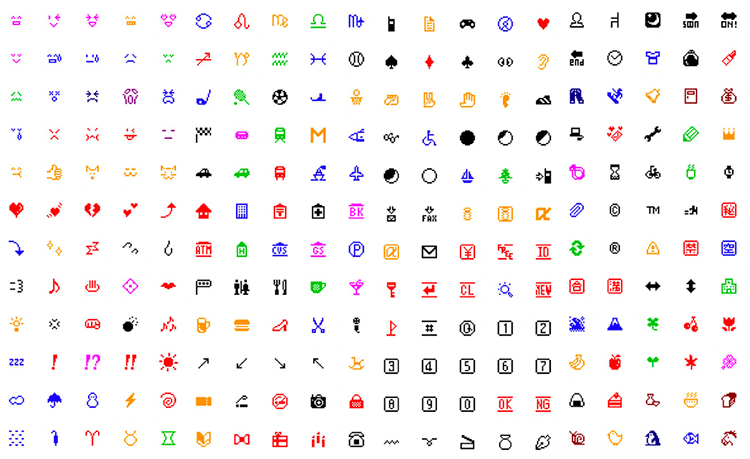 Following NTT DOCOMO, other major mobile operators, SoftBank and au, introduced their own version of emojis, and emojis quickly became an integral part of digital communication and marketing in Japan. In 2005, mobile operators, recognizing the need for compatibility with others, began in earnest to introduce features that converted their emojis to similar emojis created by other mobile operators.

In 2010, hundreds of emoji characters were officially encoded in Unicode 6.0, enabling people to use emojis across mobile operators and devices, thanks to contributions from Google and Apple. Both partnered with Japanese companies to enter the Japanese market: Google partnered with KDDI to acquire users for Gmail, and Apple partnered with SoftBank to distribute the iPhone. Each of their Japanese partners emphasized the importance of emojis in Japanese communication. In 2011, Apple introduced emojis in their standard keyboard allowing global users to use emojis in their daily communication. The rest, as they say, is history.

A non-Japanese person may think: Wealth, success
This emoji actually means: Losing money
For the Japanese this emoji has a negative connotation. It usually represents losing money from overspending or from an unexpected expense.

A non-Japanese person may think: Real and authentic, agreement, 100 days of a Snapchat streak
This emoji actually means: Perfect or outstanding performance
Japanese school exams are usually scored from 0 to 100 points; 0 is the worst and 100 is the best. Teachers emphasize 100 points of achievement by adding a double line under the number.

A non-Japanese person may think: A girl flicking her hair, a sassy girl
This emoji actually means: An Information desk clerk
Japanese people use one hand with all fingers together to point out or introduce something or someone in a polite way.

A non-Japanese person may think: Cherry blossom, white flower
This emoji actually means: Excellent work!
This emoji represents a cherry blossom stamp that Japanese students get at school when they’ve performed well on their homework or project. The words inside of the flower translate to “Excellent work,” and Japanese people use this emoji to acknowledge someone’s job well-done.

A non-Japanese person may think: Bang, pain, hitting someone or being hit, punch
This emoji actually means: Angry and irritated
This symbol is commonly used in Japanese manga and anime, where it represents veins popping out in anger.

A non-Japanese person may think: Yellow and green shield
This emoji actually means: Beginner
Beginner drivers are required to display this sticker on their car for one year after they get a driver’s license. As this symbol is well-recognized in Japan, the emoji is used to represent “a beginner,” in general.

A non-Japanese person may think: No good
This emoji actually means: Prohibited items or actions
This emoji is typically used to express bad practices or inappropriate behavior.

A non-Japanese person may think: Kebab, Skewer
This emoji actually means: Oden (Japanese dish)
Oden is a Japanese one-pot meal that consists of different types of stewed ingredients, such as fish cakes and eggs. Japanese people typically enjoy this dish in the winter since it’s a hot dish and warming during cold winter months. it’s a popular option at convenience stores.

A non-Japanese person may think: Tofu on fire
This emoji actually means: Name badge or name tag
Kindergarteners wear this tulip-shaped name badge to show their name, class, and, sometimes, a phone number.

A non-Japanese person may think: A random building, Tesla building (because of the symbol)
This emoji actually means: Japan Post Office
The symbol “〒” represents a post office.

A non-Japanese person may think: Robe
This emoji actually means: Kimono
Kimono is a traditional Japanese garment usually worn on special occasions. Some people using “kimono” in a fashion context, to refer to a type of robe, have been criticized for cultural appropriation. We recommend using this emoji only when referring to an actual Japanese kimono.

A non-Japanese person may think: Jellyfish
This emoji actually means: Windchime
Japanese people associate this wind chime emoji with summer as it’s a time to enjoy the delicate melodies of wind chimes created by the soft breezes of summer.

A handful of emojis use Chinese characters. Though they may look decorative and cool, each of these emojis have a specific meaning and purpose.

🉐 : Bonus, bargain. Use this emoji to show something beneficial to your customers.
🈹 : Discount. This emoji can be used when you offer discounts for your service or products, like a student or senior discount.
🈵 : Full. This emoji is typically used to notify people when parking spots or reservations are no longer available.
🈳 : Vacancy. Opposite to the previous 🈵. Use this emoji when you have parking spots or reservations available.
🈲 : Prohibited. Use this emoji to indicate things or actions that are not allowed.
🈂️ : This character is a Japanese character. “サ” is the first letter of “service” in Japanese and this emoji means “service charge.” When used with a word “無料” it means “no service fee.” It can also be used with a specific price to indicate a specific service fee like “🈂️ ¥1,000.”

Incorporating emojis into your marketing efforts in Japan

Understanding Japanese-originated emojis is important for effective communication in Japan, as the examples above have illustrated. I came across a company’s website that showcased their multilingual capabilities. They used the “folded hands” emoji to describe “welcome” in Japanese. This gesture is primarily used in Japan to show an apology or appreciation but not to welcome guests. Though the majority of people will shrug this off, a minor mistake like this reveals your unfamiliarity with the Japanese market and can be a costly misstep in your attempts to connect with Japanese customers. To their credit, this company changed the emoji to a peace sign emoji as soon as I brought it to their attention. I respect when companies are open to listening to locals’ voices, an important attribute for acquiring more customers in Japan. 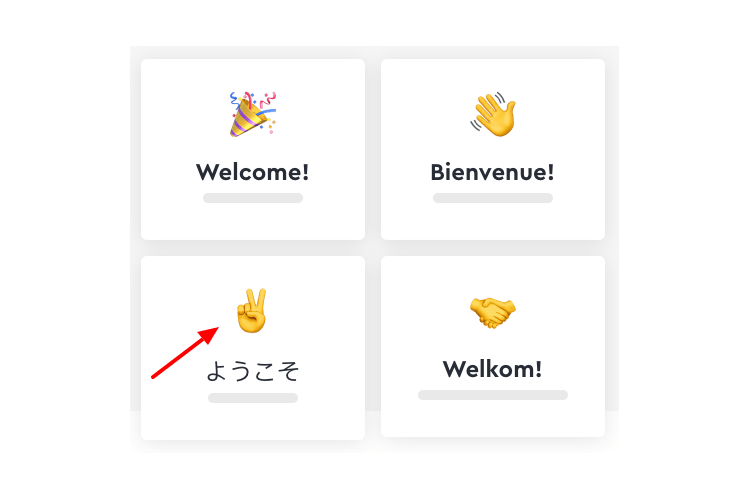 The tricky emoji characters we discussed earlier are just a starting point. We would recommend the following tips when you incorporate emojis into your marketing communication in Japan.

1. Learn the meaning of hand gestures

Hand-gesture emojis are very handy (pun intended) to add some personality to your marketing message. Keep in mind that gesture meanings differ from culture to culture. Something friendly in one culture may appear offensive to another. Make sure to check the meanings of gestures before you use them.

2. Vary your emoji use by audience and occasion

Japan has a very strict business protocol. Rule number one in Japanese business culture is to show respect to others, especially customers and superiors. Even though emojis are widely used across generations, some people –from older generations in particular– consider it inappropriate to use emojis in business communication.

In a survey conducted by Nulab, more than 30% of people in their 50’s and 50% of people over 60 answered that emojis should not be used in business communication. On the other hand, younger age groups, especially people in their 30’s, are more positive about using emojis in business communication, indicated in the chart below. We should note that the percentage of those who responded in the affirmative, that “emojis should be used in business communication,” was still under 55% in all age groups, even in the younger survey participants. 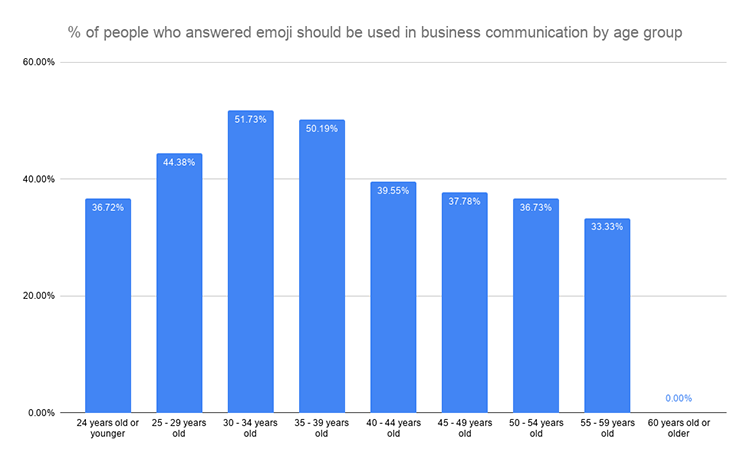 One of the respondents mentioned that he gets annoyed when people use emojis in an apology email. A couple of respondents commented that emojis come across as too informal and excessively friendly in a business relationship, which can lead to disrespect towards superiors. Another respondent pointed out that people don’t take your message seriously if you use emojis, even though your intention is to facilitate communication. The survey shows the importance of understanding who you are talking to and customizing your usage of emojis depending on the audience and context.

There are a handful of emoji characters that represent unique Japanese culture and seasonal events: the fish flag emoji(🎏) represents a Japanese national holiday that takes place on May 5th, the moon-viewing ceremony emoji(🎑) represents ceremonies held in the fall to celebrate the full moon, and the bamboo decoration emoji (🎍) represents the New Year. Using any of these in the wrong season could be confusing to your Japanese audience.

Emojis, used appropriately, are effective communication tools that help us convey a message, even across language barriers. Everyone knows what this face with tears (😂) emoji means. When emojis are used incorrectly, however, companies expose themselves to misunderstandings and customer service debacles. Particular attention needs to be paid to the use of emojis in Japanese business communication, as you’ve seen their usage is still not widely accepted in that context.

When considering how to use emojis to improve your marketing efforts in Japan, it’s best to engage an expert, somebody who is familiar with the culture of the audience you are trying to engage with, who can review your messaging and emoji use to make sure everything is culturally appropriate and relevant.

Here at btrax, our bicultural and bilingual team members can help you localize your communication strategy in the Japanese market. Contact us to explore how we can work together!

Did you enjoy our article? Subscribe to our newsletter to get our latest articles in your inbox!