After getting to the prototype stage following a course of painful pivots, “Eureka” moments and developing numerous prototypes, most hardware startups face another colossal challenge: How to get their product to market.

Many are now turning to crowdfunding to raise vital capital to fund initial production and to kickstart their go-to market strategy.

Yet despite crowdfunding democratizing market access for startups, competition on those platforms has never been more fierce. A battle for crowdfunding dollars now rages between innovative products, unique designs and savvy marketing professionals all vying for the a limited pool of cash and those precious early adopters.

Needless to say, without exhaustive preparation, professional PR and marketing expertise and a solid product, crowdfunding efforts can flop.

YOLK, a Seoul-based startup, recently hit the jackpot, passing the $1 million mark on Kickstarter with Solar Paper. Like many before them, YOLK, led by CEO Sen Chang, bootstrapped development of the product and leveraged crowdfunding to raise production capital.

The result was a cool $1,021,583, furnishing YOLK with the accolade of being the first in Korea to break the $1 million mark on crowdfunding. To put the achievement in perspective, this result places the campaign well within the top 1% of crowdfunding campaigns globally.

Solar Paper, which exquisitely intersects style and function, is the thinnest and lightest portable solar charger available to consumers. Watt for watt it is also the most efficient.

While Solar Paper is almost universally appealing (valuable for anyone with a smartphone), there many other factors that helped YOLK top $1 million in contributions.

Here’s our assessment of how YOLK achieved this incredible result

Solar Paper was Sen’s third project. In previous campaigns she built a large network of passionate backers, who believed in and evangelised her products because they were high-quality and delivered on time and in line with expectations. 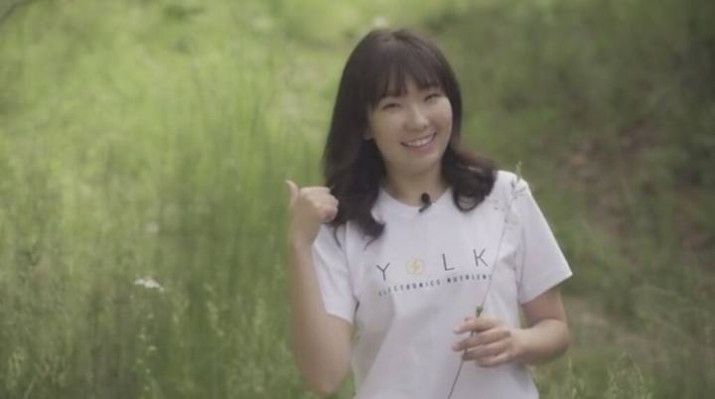 “During that time companies need to focus on building a mailing list of around 5,000 potential backers and a social media following around the same size,” he said. “Spending time to film a product video that powerfully answers the question ‘How will this product improve my life today?’ is essential,” he continued.

Preparing a basic landing page, as well as securing a large number of media and influencer partners for the launch are also crucial to ensure that the campaign gets off to a strong start.

Shortcuts in preparation will have a negative impact and if skipped early on, these processes need to be undertaken during the campaign – which in turn – eats away at campaign momentum in the critical early days.

When we quizzed Sen about when preparation began for Solar Paper, she replied that she began building interest in Solar paper as soon as her previous campaign ended, a year earlier.

The All Important Video

Creating a powerful video is not about mastering an emotional tear-jerker or splashing tens of thousands of dollars on a Hollywood-grade production. Instead your video has three simple yet critical roles:

Check out  one of Solar Paper’s campaign videos below:

Within days after launch, Solar Paper had garnered tremendous global attention thanks to over 100 published articles. This wave of media attention also drove impressive traction on both Facebook and Twitter.

What differentiates Solar Paper from the crowd, with respect to PR, is that they managed to connect with many of their target markets out of the gate. They occupied space on outdoor, tech, and conservation-focused publications, giving them access to a vast audience across different interests.

While many startups crave an article on TechCrunch, this group may not be your ideal target market and it is important to understand where your potential customers are and aggressively work to connect with them.

YOLK also had social media pages up and ready to go as soon as the campaign launched. Even though they didn’t have large followings, their Twitter and Facebook pages were constantly posting updates and interacting with the public to create buzz and keep their growing community locked in and interested.

When turning to crowdfunding, you’re asking the general public to fund your no-name startup. Taken out of context, it would be the same as showing someone on the street a picture of your idea and asking them to pay it forward to get what you imagined. See the difficulty here?

From previous campaigns, Sen placed a very high premium on making sure backers feel that they’re a part of her entrepreneurial journey. Without supporters, her projects would never have taken off, and when she communicated with her backers, she made sure they understood that wholly.

Many other campaigns actively take a retailer-patron approach, but on crowdfunding this approach is inaccurate as your backers have much more clout than the average customer at a Wal-Mart.

So you’ve got off to a cracking start and within a week you are cruising towards your goal. This is the time to floor the gas on your marketing and PR efforts and ensure that your backer management plan is fully operational. without a 24/7 commitment a great start can quickly fizzle out.

Remember the emails you collected during preparation? Hopefully many of those people have already contributed to your campaign. Now you want to plug into phase two and reach out, thanking your community for their support and encouraging them to share your campaign with their family and friends on social media.

One of the last pushes that YOLK did to round out their campaign was to run a contest giving away a number of Solar Papers. The end of a campaign is a tremendous opportunity for one last push and Solar Paper fully capitalized on this.

Have A Damn Good Product

While PR and marketing efforts can help a good crowdfunding campaign achieve great results, what you need to power into the millions is an outstanding product. Outliers like Potato Salad can make crowdfunding look like a breeze, but to ensure success, your product needs to be rock solid. This extends to having prototypes for testing by journalists and clear product demos available.

Remember: you’re trying to convince people who cannot touch or look at your product in-person. This means that you need as many votes of confidence from as many different sources as you can get. While media attention may help, your product is not going to get sales until it can convince consumers on its merits alone.

While startups may think that crowdfunding campaigns require no more than a product and a landing page, in truth, successful campaigns have far more under the hood. Whether it’s pre-campaign preparation, marketing strategy or media access, a good campaign leaves very little to external factors.

While Sen had many of the preparatory steps ready, for a first-timer, it is even more vital that steps be followed down to the dot. While there are the occasional projects such as the potato salad guy who manages to baffle everyone, let me assure you: for every potato salad guy there are probably over 10,000 failed products with a incompetent product or marketing scheme.