While most of the world relies on Facebook’s Messenger and WhatsApp as their messaging app, WeChat, LINE, and KakaoTalk have been battling one another for popularity and services in Asia. This article will explore the popularity and features of each of the three most popular apps in Asia. 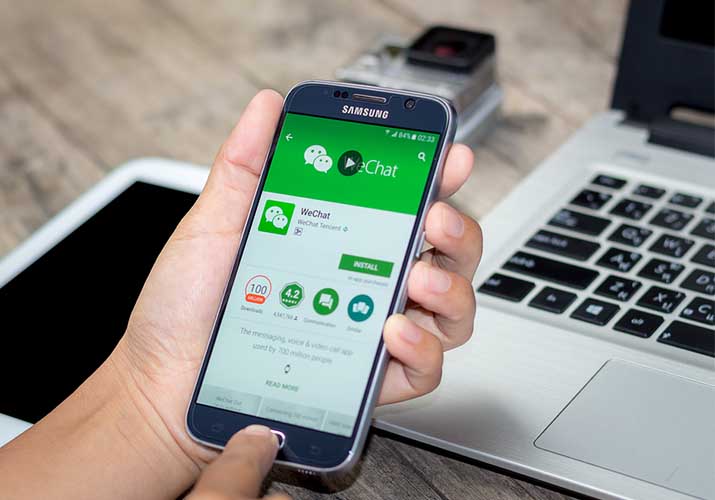 WeChat’s dominance in China comes from the fact that international social networking apps such as Facebook, Google, Twitter, Snapchat, Line, KaKaoTalk, and many more, have been banned, leaving it with little to no competition.

Its dominance and popularity also comes from its success in understanding the Chinese market and offering many useful features other than just chatting.

One of the most popular features WeChat offers is QR codes. Every account has a unique QR code which can be personalized and used to instantly find and add friends and co-workers.

QR codes can also be used to identify animals and seniors, receive and make payments, follow official company WeChat accounts, and even apply for jobs. It has become a simple and useful way of communicating between the online and offline world.

Some of the many features WeChat offers include video calling, transferring money and files, paying bills, booking flights, ordering taxis, and even making investments.

Here is a day-in-the-life video of a typical WeChat user that demonstrates how its features have become essential in everyday life in China.

On March 11, 2011, a magnitude-9 earthquake hit the coast of Japan. The disaster devastated landlines and phone infrastructures and communication became difficult. Fortunately, the Internet was still usable and people began using social networking to communicate with family and friends affected by the earthquake.

However, messaging apps were unreliable at the time and that was when Naver Corporation decided to create LINE. Since then, LINE has grown into the second largest social networking app in Asia. 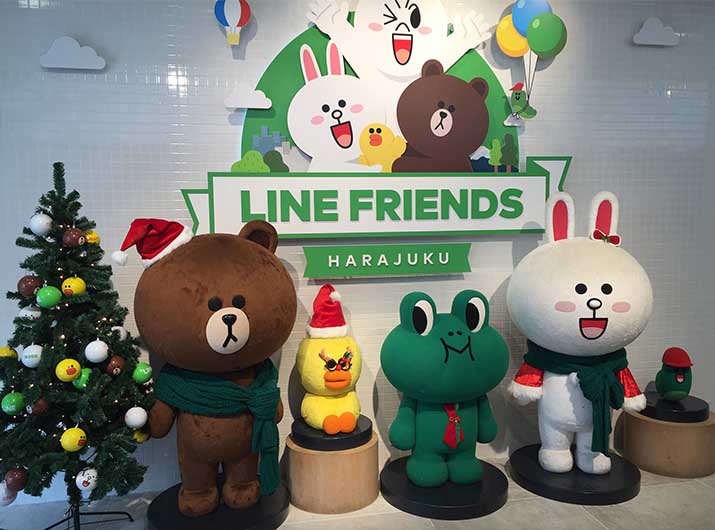 Like WeChat, LINE offers free chatting and video calls. But what really makes LINE stand out and popular is its stickers and mobile games. LINE took emojis one step further by offering stickers, which are images or moving-images of characters that represent emotions, actions, and ideas.

Stickers are purchased and downloaded through the LINE app and have become a fun and meaningful way for users to communicate.

Through the LINE Creators Market, companies and users can now create, design, and sell their own stickers to other users around the world. Some of the stickers have become so popular that it is even broadcasted on TV and sold as plush toys, clothing, and other merchandise. 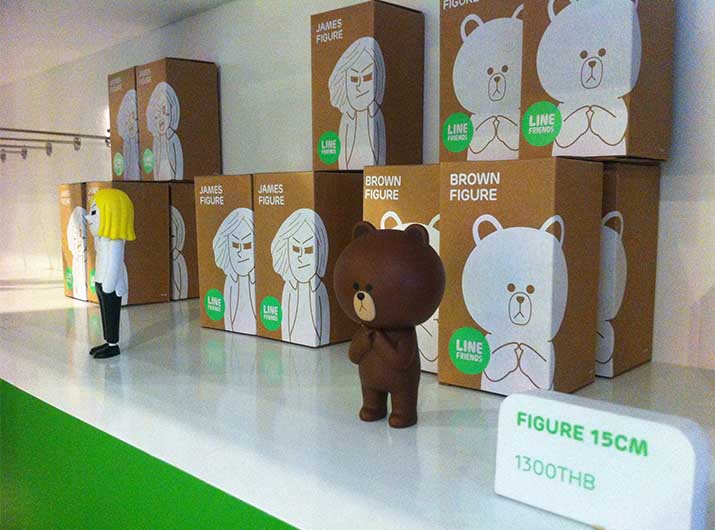 LINE has also developed dozens of entertaining mobile games that can be easily downloaded through the App Store and Google Play and most of the games are free. Users can either play solo or with friends online.

LINE also allows companies and users to create official account pages and provides content, ads, and surveys to other users. You can also register your credit cards onto LINE Pay to make quick and secure payments online without leaving the LINE app.

KakaoTalk launched four months after the iPhone was first introduced and three months before the first Samsung Galaxy S became available in South Korea. Due to the company’s quick decision-making and right timing, KakaoTalk quickly gained 10 million users just one month after launching. 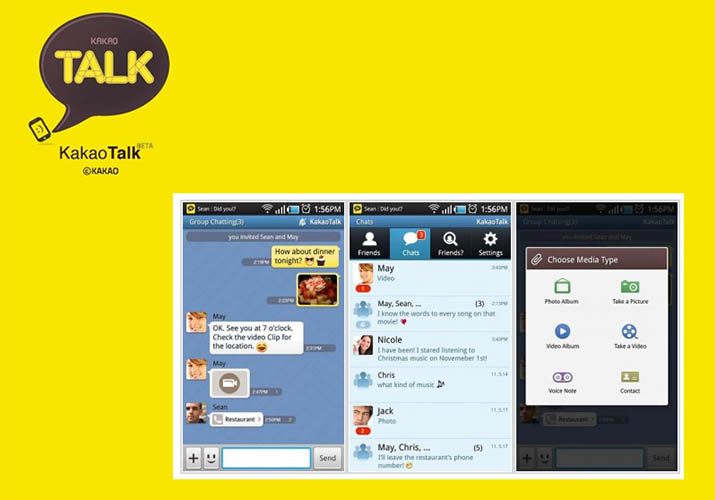 In 2014, former South Korean President Park Geun-hye vowed to prosecute people spreading rumors about her and criticizing government actions on KaKaoTalk. This led to many users abandoning the app in fear.

In response, KakaoTalk launched the ‘secret chat’ feature which allows chat histories to only be stored up to three days and allows users to enter a hidden chat with end-to-end encryption. This meant that only the people in the chat could read the messages and messages could not be intercepted by outsiders. 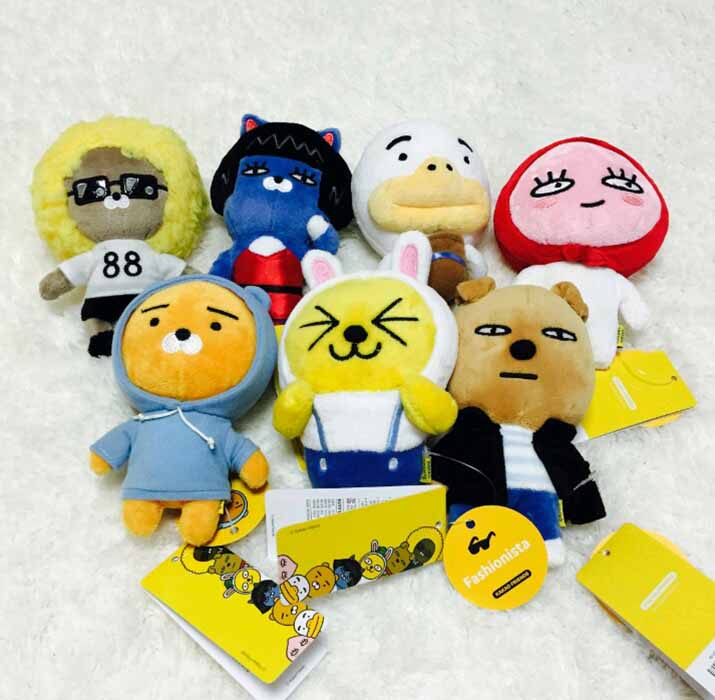 The ‘In-Chat Search’ feature allows users to search results on the web and share it all without having to leave the app. Users can search the dictionary, websites, web pages, and even the news. The results are separated into a category of sliding cards making it easier to find and choose what to share.

WeChat, LINE, and KakaoTalk all started off as simple messaging apps that offered free one-to-one conversations, group chats, and video calls as long as there was internet connection.

But these apps began tailoring to their audiences and quickly offered a variety of features that changed the way companies interacted with customers and allowed information to be rapidly processed and spread.

With the constant development of technology, we can expect bots with artificial intelligence and augmented reality to soon be incorporated in messaging apps. 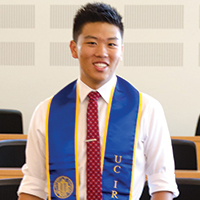 Ivan is a marketer at a biotech company here in Silicon Valley. He graduated with a BA in Sociology and minor in Business from the University of California, Irvine. During his free time, he enjoys traveling and learning about different cultures.