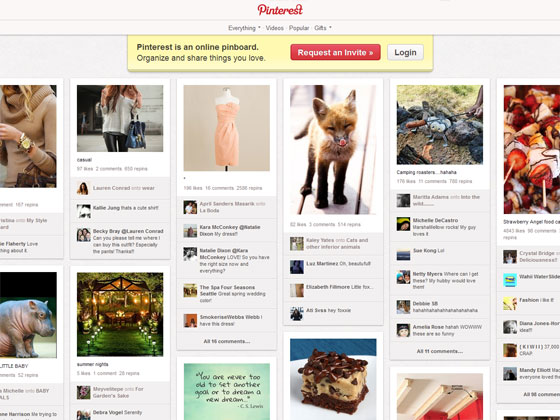 The first photos you probably see when you visit Pinterest? Photos related to fashion, models, sweets, etc. Many reports have found most of Pinterest’s users to be female, and while it expanded quickly due to its focus on women in the US, the potential for popularity in Japan is also very high.

Because photos are generated by people’s interest, and because Pinterest generates more traffic than Google+, a large number of corporations are utilizing Pinterest as an effective marketing tool.

The fact that 60% of Pinterest’s user base is female should be closely observed. When considering marketing on Pinterest, women cannot be ignored by any means.

In terms of mobile usage, smartphones are becoming increasingly popular in the hands of young women. Previously smartphones were mostly popular along males, such as young businessmen, but women these days look to smartphones to replace their older cell phones. Morever, women consume more goods compared to males, as found in this report from TechDoll (Japanese).

Based on the rising consumption of goods by Japanese women, a new term has come to describe this phenomenon. This market is now labeled as “Smartphone Girl” or “Sumaho-joshi” (スマホ女子) in Japanese. It is quickly becoming a time where women influence the market and men create the goods. The female buying power in the market can also have an influence in marriage and traveling; as well as purchasing a house, insurance, or even appliances.

With the rise in idols such as AKB48 and the increase in buying power from female high school students and young women alike, it is no wonder that more smartphone apps try to tap into this quickly growing market since more women are buying smartphones and accessing the Internet.

What impact is there given these facts? Although it is new market, it is growing quickly. Here are five apps that are approaching this market. 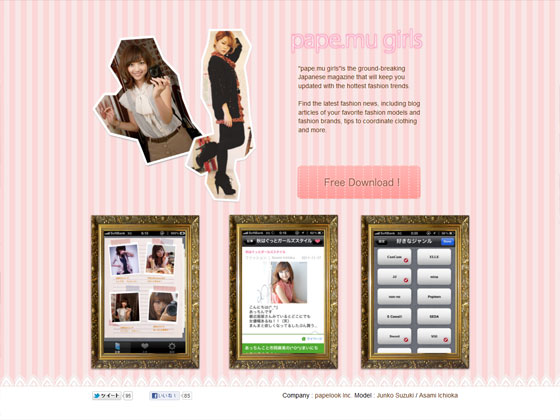 When we hear the words “a market that targets women,” we think of fashion first. For example, the recent New Year’s sale at 109 Shibuya (a famous fashion shop in Japan) totaled 20,000 people. Even the premiere of the iPhone did not attract that many people; it shows that women at that point are more interested in fashion over technology.

pape.mu was created to keep young women up to speed with the latest and hottest fashion trends. It organizes blog articles about the hottest brands, the latest trends, and clothing coordination into one application. It can even be called the female-oriented fashion version of Flipboard. pape.mu is making strides in becoming the newest fashion-oriented media for women, as you can browse fashion information almost like you are reading a real magazine. In addition, the more a user accesses and uses pape.mu, the more optimized the information becomes, delivering information tailored to the user and allowing them to access their favorite fashion blogs quickly.

In Japan, many fashion bloggers are currently using Ameba, a popular Japanese blog service, as their primary blogging tool. However, I feel readers can access fashion information faster through pape.mu because of its more optimized functions and usability. 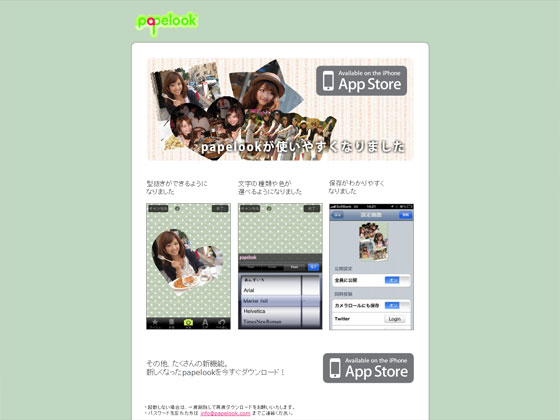 Papelook goes hand in hand with pape.mu and also has the ability to recommend and optimize itself based on the types of information a user views the most. It began as an idea of free expression in a blog, and it allows the user to clip photos taken with their iPhone and put them in a scrapbook or add cute characters to them.

Papelook was downloaded 150,000 times last year after its October debut and opened up the demand for similar apps that can be utilized by many people. It gives the user many different ways to decorate their photos and share them to sites like Twitter and Facebook, and it has accommodated the needs of its user base well. 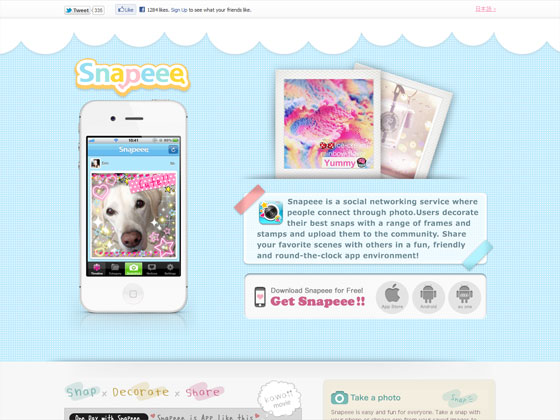 This application, I think, is currently very famous in Asia. It is a picture sharing app, but can also be called a social purikura machine that allows you to share the photos you’ve decorated within the app.

To demonstrate, I took and decorated this photo using snapeee. Stamps and decorations can be stuck onto a photo and uploaded snapeee’s timeline, and it can also be uploaded onto Facebook or Twitter. In addition, a partnership with GREE and KDDI allowed for the development of a marketplace within snapeee that allows users to purchase and download new stamp sets. Although the market exists for monetization of the app, usage of both shopeee and snapeee continue to grow. I would love to see snapeee follow in the footsteps of LINE in the Asian market and become one of the most popular apps. 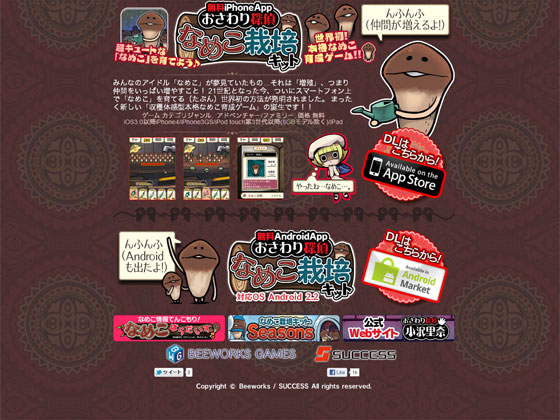 Did you know Nameko Mushroom Cultivation has grown quickly among women in Japan these days? Oricon, a Japanese ranking site, calls it “the application that can be played with a little free time”, and currently ranks first among students in their teens and 20s, as well as businesswomen in their 20s and 30s. Unexpectedly, Nameko Mushroom Cultivation Game has attained 2,000,000 downloads and unprecedented popularity among women.

Is this a game that is “played” in a typical manner like other games? It is actually more like an app that generates a sense of fun and achievement when a nameko mushroom is harvested. The mushrooms grow in real time, and mushrooms cannot be harvested until after a certain period of time. After harvesting, new mushrooms can be fed and cultivated, and after several hours they will again be available for harvest. Harvesting requires the user to log into the application twice, and by influencing the users to log into the app several times the app slowly becomes something a user will continue to play.

Three elements that I noticed that captivate women in playing this game are the harvesting of mushrooms, raising the mushrooms, and the surreal factor of raising fungi within an app. These are also elements present in Tamagotchis, which grow and are raised; Pinterest, which brings out the factor of cultivation, and a surreal environment, in which it is otherwise nonsense to raise
mushrooms through an app. These three factors are what I feel make this application a huge hit.

From these sites, it is clear that the number of apps and other mobile media catering to women will continue to increase as the number of women obtaining smartphones continues to grow. Even YUME TENBOU, an e-commerce site, has released an application that allows users to virtually try on dresses using their iPhone, and attention should be paid to this app as well.

Decowee, a unique add-on for Chrome, allows a user to decorate the Internet and upload their decorated versions of websites to Twitter. Although it requires you to install the add-on before it can be used, this way of thinking is new and unique. Not only will the website decorating be ornamental, but it can also be reflected in real time by others who also have the plugin installed. It has opened new possibilities in plugin development for a future plugin that will target young women for website designing and possibly spread their influence throughout the web.

Although it seemed like only a select few sites and apps catered to the “Smartphone girl,” it is obvious from the above examples that apps and websites geared towards women is quickly growing. Technology normally has an innovator and an early adapter, which involve people with high literacy and can be a very small number even within the male user group. Up until this point, the first priority for technology was among the most technologically advanced users. However, the Internet is becoming more familiar and natural to us without a need to be “Internet-savvy” to use the Internet. Services are becoming more efficient, and the release of popular gadgets like the iPhone became the starting point of a large blue ocean that has yet to be fully explored.

The natural flow of the Internet as well as the higher standards for UI/UX flow has created a path that gives technology the ability to reach even the most technologically illiterate users.

mixi, ZENRYAKUprof, and CROOZreal won the popularity of Japanese high school student users of mobile technology. How will these services change and how will they rise in popularity once smartphones become more prevalent among female users?

Original post written by Shinichiro Kinjo. Mr. Kinjo is a designer and hacker from Japan. Follow Shinichiro on Twitter as well as http://hanpanai.com/ for even more news and commentary. English translation edited by Miko and Erin.