Multilingual Travel Magazine Gets a Facelift and Becomes Social

We have been working with Chaperon for over a few years and it has been great.  Chaperon publishes an yearly travel magazine that guides visitors to popular sites,venues and general information in the San Francisco Bay Area. Chaperon wanted their branding for their publication to celebrate their 20th Anniversary, be consistent among all six languages and have the ability to view their magazine online.  Our team handled the print, web and social media design for our client.

One of the biggest challenges was to give consistency to design detail to Chaperon’s multilingual print guides across six languages. We analyzed all languages for layout consistency and worked to make sure that all design elements in the layout were treated uniformly.

Our lead designer Angela recalls, “It was our goal to enhance Chaperon’s existing look by paying close attention to design details including using consistent heading text treatments, fonts, paragraph spacing and section tabs. We also wanted to update the look by redesigning some elements like section tabs, tables and charts.”

It seems like it is always the small details that make the biggest impact to the look and feel of the design. Angela said, “Just by making sure that all the details are consistent across pages and books, it gives the look a more organized and clean feel, which adds to the value of Chaperon’s brand. The content is valuable and helpful for visitors to San Francisco and we want readers to feel that the information is presented well and is easy to read.”

The website was revamped by our company a few years ago and this year’s update included adding the ability to read the print magazine in flash. The original website did not mirror the look and feel of the magazine. 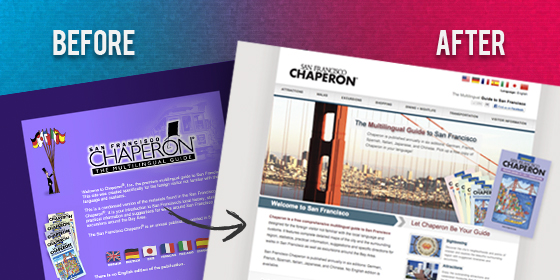 We wanted to give the website design a look that complemented the printed magazine. Angela said “We designed the web site and content to emphasize the multilingual aspect of the magazine and picturesque images of San Francisco and surrounding areas.” This is what gives Chaperon its unique value proposition among the local travel magazines.

For their latest website update, we wanted to create the same magazine experience online so we decided to make the magazines available in digital reader. Angela added “The effort we took to make the magazines more consistent also looked great digitally! Now users can view Chaperon online and flip through the pages even before they pick it up in San Francisco.”

Chaperon wanted us to create a Facebook presence for their brand. Greg, our social media manager, said “We wanted a landing page that celebrated their 20th Anniversary, engaged people and explained who Chaperon is in multiple languages.” The teams solution was to create a multilingual Facebook page that allowed visitors to view the magazine in multiple languages while staying in the Facebook environment. 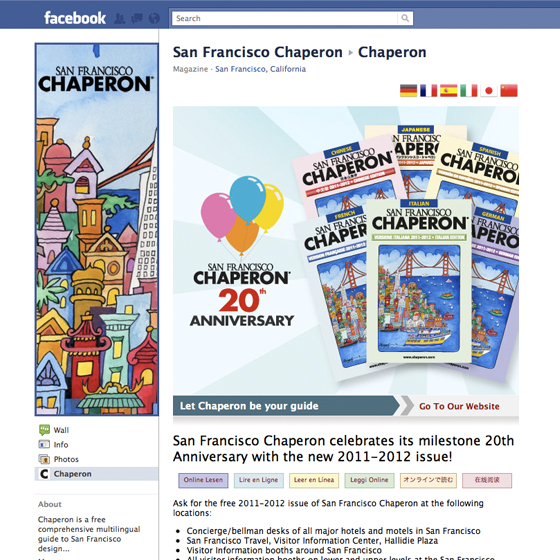 Thea Leonardi, owner of Chaperon, said “I was very happy with the attention to detail and the client engagement that the btrax team had with me. I always knew where the project stood. The Chaperon magazine really looks good and having the ability for my magazine to be viewed online really gave me an advantage over my competition.”

Even though we discussed the individual elements (Print, Web, Social Media), we had to integrate all the elements to make the branding consistent for the client. The marketing is the how you communicate about your brand and the branding is the response of how your audience feels about your company. Elements we take seriously at btrax.