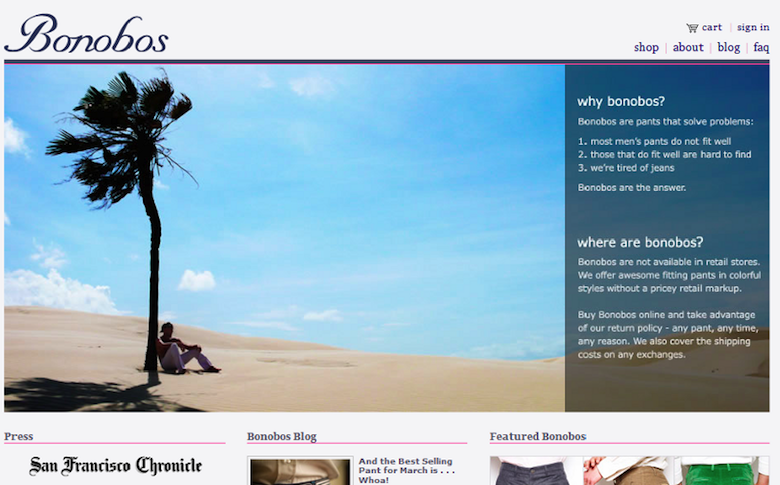 Get One Thing Right: The Bonobos Story

A lot of brands don’t make it because in the process of trying to get many things right, they don’t get anything right. Why are they in such a hurry?

The stories about the singular products that started many great brands crowd out the stories about the singular brands that started with many great products. You know where I’m going: Ralph Lauren and a tie, Diane Von Furstenberg and a wrap dress, Potbelly and a heated sandwich, Theory and a women’s pant, Tory Burch and a ballet flat, Kate Spade and a handbag, Google and an “I’m feeling lucky” button, Warby Parker and a pair of glasses…

You want your inaugural product to be wanted badly by your inaugural users, and that is hard to do with multiple products. Paul Graham has written expertly on this in his seminal essay How to Get Startup Ideas in the must-read section entitled “Well”:

Focus on a single product.

It can take years to build a brand or a company, which makes the logic of launching with all kinds of products even more confounding. As we gradually evolve from a wholesale-driven world to a vertical retail-driven world, as e-commerce proliferates and it becomes increasingly easier to get the best price on the best product, as the app store gets even more full, my belief is it becomes even more important to be focused on singular product-driven excellence from launch.

At Bonobos, it has taken years to perfect our first product: men’s pants—and we’re still doing work every day to make them better. My cofounder Brian Spaly, who is my role model on entrepreneurial tinkering, began developing the idea for better pants in 2005 when we were Schwab roommates at Stanford business school. He conducted lean consumer research in 2006 on our classmates, including me. He wanted to know what kinds of pants we wore, what we thought about them, and where we bought them.

What he discovered is no one really liked their pants.

He developed the first prototypes to solve this problem, “Spaly-pants,” in 2007. The Spaly-pants really did fit better—with an innovative contoured waistband, and a tailored fit through the seat and thigh which threaded the needle on the “American pants are too boxy, European pants are too tight” conundrum. He made them in pliable fabrics, some in bright colors, and all with aesthetically-exciting contrast pocket liners that attracted a lot of attention to the joy put into the product. You know you have a hit product when you have $10,000 of cash in your hands from your first production run, which Brian soon did.

When I realized Brian’s hobby could become a company, I began helping him. Eventually, at his invitation, I became the founding CEO. We teamed up and sold pants like crazy for the next six months to everyone we knew. We did trunk shows. We did pants parties. I took a duffel bag of pants wherever I went, including to weddings in LA and in Hawaii where I still get grief for being the guy hawking pants at brunch or over poolside mai-tai’s.

We took our first product, a product we knew a very small group of people loved, and we sought to expand that number of people as fast as we could. After a successful trunk show at the loft of Michael Spirito (more on him later), I pitched The Oracle and the Jedi in July of 2007. They each committed to investing.

Soon our classmate-customers began asking if they could invest; the first of those to invest was our first customer and our now CFO Bryan Wolff. We decided it would be great to take on angel investors who were brand evangelists, even if they could only invest $10,000 or so. Over the next six months we raised what had started as a $300,000 round and eventually became a $750,000 round, with over forty investors contributing. It was a long cap table, but we thought it was worth it to have our early adopters spreading the word with skin in the game.

We didn’t begin angel investor conversations until we had tens of thousands of dollars of sales: until we knew “the dogs were eating the dog food,” as the Oracle likes to say. This is the opposite of the model where you raise seed money before you know if your product even works. We were lucky to be able to do this because Brian had saved money to invest in the working capital to start the company, and I cashed in a 401k to be salary free as our CEO for the first several months.

We never thought about a second product. In fact I had one slide in the appendix of our initial angel investor deck which showed the progression of products we might make years down the road in the event that we were successful, and I’ll never forget what the Oracle told me: “I don’t want you even thinking about this stuff until you have proven you can sell pants.”

While many angel investors were classmates from Stanford or mentors, another dozen or so were new customers I met in New York. They were the early adopters of the brand when I moved the company to NYC in the fall of 2007—guys who came over to try on pants at an apartment I shared with a friend and angel investor at 17th and Irving in Manhattan. The new NYC customer-investors were guys who loved the product and the business model, and many of them offered to invest on the spot.

We captured sales in an excel file, and we collected money the old school way: cash and checks. 90% of customers who tried on the pants purchased. We had sold 475 pairs of pants that summer. 25% of customers purchased three or more pairs. We hadn’t even launched e-commerce yet, but we had $50,000 in trailing revenue from selling in-person and through the mail:

We were now ready for a more scalable selling model—e-commerce. That summer, I had recruited another Stanford GSB classmate, Erik Allebest, to become our e-commerce advisor. He had built the largest chess e-commerce site in the US prior to Stanford. Prior to my move to NYC, we spent the summer of 2007 in a yurt behind his house in Menlo Park building what would become www.bonobospants.com.

Once we launched the site in October of 2007 we re-doubled our in-person selling efforts. We sold more, not less, to feed our new automated selling engine with demand. Trunk shows expanded to Chicago, Philadelphia, D.C., and Boston. We brought on early brand enthusiast, and another friend from Stanford GSB, Michael Spirito, as an off-hours advisor who “prototyped” selling pants out of his apartment on 14th street. His loft was—in a way—the first Bonobos Guideshop. He was such an enthusiast that he proactively wanted to sell pants in his free time to friends and colleagues.

We began to get great editorial PR without asking for it. I was sitting at the Heartland Brewery in Union Square that November talking to a potential vendor, when I had a number of angel investors text me that our site was down. UrbanDaddy had run a story on us called Monkey Business: Towards a Better Fitting Pant and it crashed our site. It was also our first $2,000 day.

Soon we hired the wife of another Stanford GSB classmate-customer-investor, Polly Ryerson, to drive our PR strategy. With great PR, word-of-mouth, continued in-person selling, and some very limited experimentation with online marketing, this happened:

Six months after our e-commerce launch, we were at $1 million revenue run rate. Less than twelve months in, we were at $2 million revenue run rate. I marvel when I reflect on this: We didn’t have straight leg fit, let alone our now amazing slim straight fit—just a super exaggerated boot-cut. We didn’t offer inseams yet, so most likely you had to get the pants hemmed. We had just a couple of fabric choices, in a about a dozen colors; a minuscule fraction of what we now offer, and in a single category when there are now more than a handful. We didn’t have denim. We had only just launched khaki color chinos. There was no way to try them on before you buy.

And yet we saw a hockey stick ramp. How can this be?

A lot of men’s pants don’t fit that well. We were 100% focused on it, and the fit was better than what most guys are used to. We also hit a nerve with our service model. A lot of men don’t like traditional shopping—we offered a new kind of experience: digital at its core, and more personal as enabled by our team of customer service Ninjas. We were crystal clear about our messaging: come to us because you want great pants, and you want a better way to get them.

It was a narrow and deep story for the type of narrow and deep well that Paul Graham alludes to: a niche audience of early adopters of great-fitting, colorfully-energetic bootcut men’s pants.

We amplified that story through press coverage, more in-person selling, experimentation with ads on a then brand-new advertising platform called Facebook, and most of all, great word-of-mouth. Bonobos was born.

Bootcut is now less than 10% of our pants business. Pants are now less than 40% of our total business. Our online-driven model is now complemented with personalized, service-focused e-commerce stores—Guideshops—which are our most investable growth channel.

We’ve come a long way, but we’d never have made it here if it weren’t for that first product.

What I learned from this experience is the best way to get volume is to sell a lot of one thing, not a little of a lot of things. It’s obvious in retrospect, but not necessarily in the moment. Building Bonobos through pants has informed our decision to pre-launch with just denim at our women’s brand, AYR. We have spent a year obsessing over the product and we did a 1,000 unit test this fall to make sure we had a hit product before proceeding with the fuller brand launch early next year.

So how do you build a brand in the digital age?

My belief is you do it with a narrow and deep story about what you are doing, and that what you are doing requires a high net promoter score—a high-level of customer-to-customer recommendation. A high NPS gives you the best kind of marketing there is: word-of-mouth and organic PR. This creates buzz. Buzz creates brands.

It’s a paradox: even if you make two great items right out the gates, just by having two you make it harder for the customer to know what job to hire you for.

So why start with two, when it creates more risk to what you’re doing, when it requires more capital, when it dilutes your focus, and when it’s harder to message who you are in those precious early innings? Remember: you’ll have opportunities to grow revenue and extend the brand later.

Our CFO loves to remind me: “Money runs out faster than opportunities.” Make one thing great. Get one thing right.