※ This article was originally written in Japanese and posted here.

Emoji are used by everyone every day. They have become a necessary part of modern communication. Emoji can be used to easily convey emotions to other people and to soften the atmosphere compared to text-only messages. It is estimated that 6 billion emoji are used every day in the world with the average number of emoji sent per person per day in the US being 96. In this article, we will discuss emoji as a global design, its role in communication, information transmission, and the meaning of emoji across cultures.

The world’s first emoji was created by NTT docomo designer Shigetaka Kurita in 1999. It was designed as a 12 x 12 pixel grid to enhance the visual interface of tools such as text messages and cell phone e-mail. In Japanese, emoji is written as “絵文字” meaning graphic letters.

Emoji is a Global Language

Emoji were first used on flip phones, but after the release of the iPhone in 2007, they gradually gained traction for use on smartphones as well.
Later, in 2011, Apple added emoji to the keyboard, making it possible to use emoji in the same way that we use the various text keyboards to change languages. 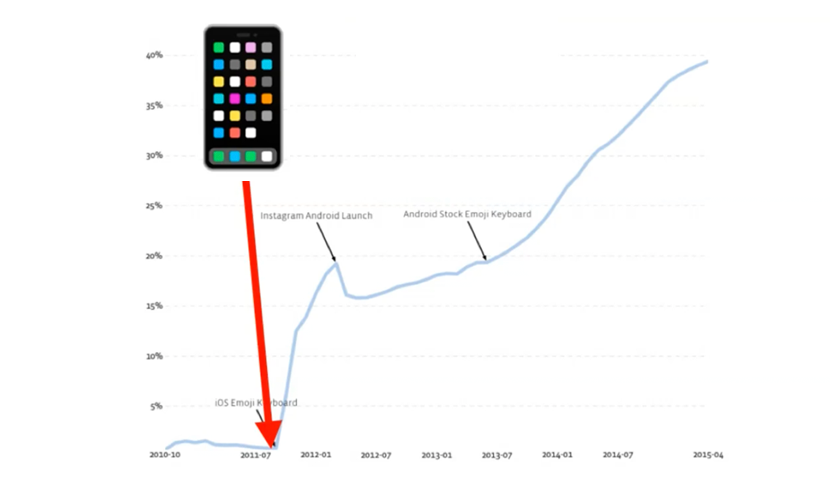 Emoji: Born in Japan, Internationalized in the U.S.

As emoji began to be used around the world, their value as a “common language” came into question. Emoji were originally used mainly in Japan, many emoji were pretty specific to Japan. For example, ramen, curry, and other foods popular in Japan.

However, around 2015, two Chinese-American women upset that there were only Japanese foods and not even Chinese dumplings started working to internationalize the emoji. The women then founded Emojination, an organization dedicated to elevating the status of emoji. 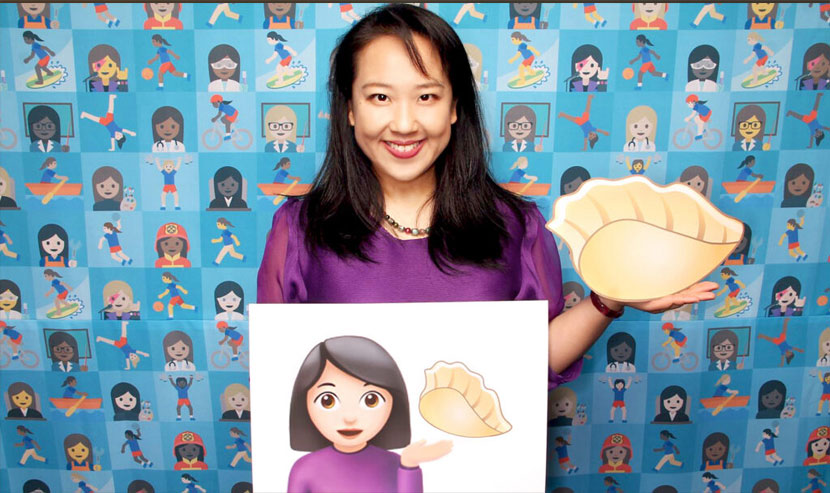 Emoji is managed by Unicode in the U.S.

From that time to the present, the world’s pictograms have been centrally managed by Unicode, an organization based in Silicon Valley, U.S.A. Unicode is a digital character data management organization with the mission to enable every language speaker on the planet to use their own language on computers and smartphones.

Unicode’s members include Oracle, IBM, Microsoft, Adobe, Google, Apple, Facebook, Yahoo, SAP, Huawei, and many other global IT companies. Emoji, like character encodings, are managed by Unicode as a common language.

The Emoji Committee’s lack of diversity 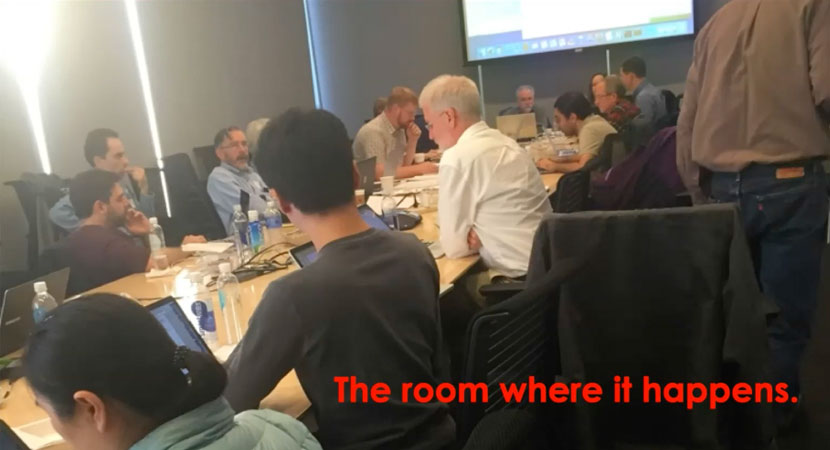 The committee discussing the approval of pictograms

The three people who actually made the decisions were all middle-aged white males, and there was not a shred of diversity in the group, the girls recalled. 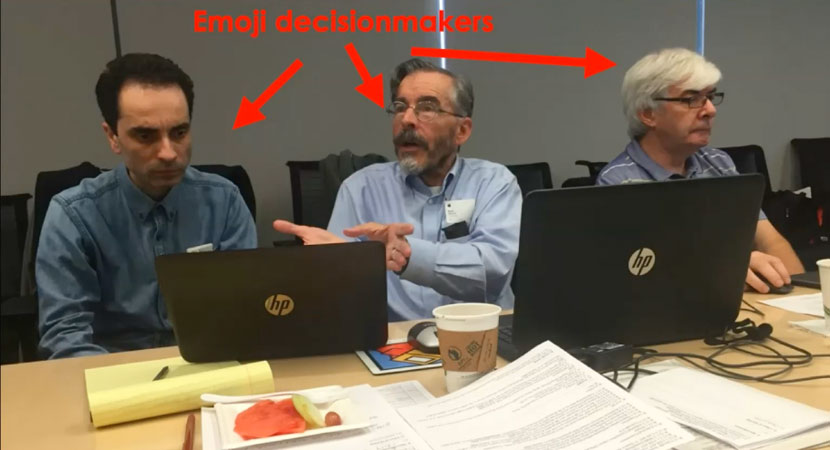 Three people deciding to adopt an emoji (in 2015)

So what kind of process and review criteria does an emoji actually go through to determine whether or not they will be adopted?

Points that make emoji more likely to be adopted

Points that make it difficult to be adopted as emoji

Based on these review criteria, the following review process is used to determine whether or not emoji will be registered. Incidentally, the time from application to approval is 18-24 months, and about 30 emojis are added every year. (Process of getting emoji approved)

The process of getting emoji approved

Global dumpling that was approved for consideration

Here is an example of an emoji that was actually approved as an “official” pictogram through the process described above. This is the dumpling emoji that inspired the founding of Emojination. This emoji, created by designer Yiying Lu, was officially adopted by Unicode after considering the wide variety of dumpling emoji available around the world, with a design that was as unambiguous as possible.

Emoji designed with the world’s dumplings in mind

Who can apply for new pictograms?

The answer is simple: anyone. Any individual, company, or government agency can apply.
There is even an example of the Finnish government applying for a “sauna” pictogram.

Sauna emoji applied for by the Finnish government

Emoji were born in Japan, but they are required to evolve with the changing times. In addition to understanding and expressing different races, genders, and cultures, LGBTQ+ issues have recently been taken into consideration, and the matching app Tinder has implemented several different emoji to express “couples”. 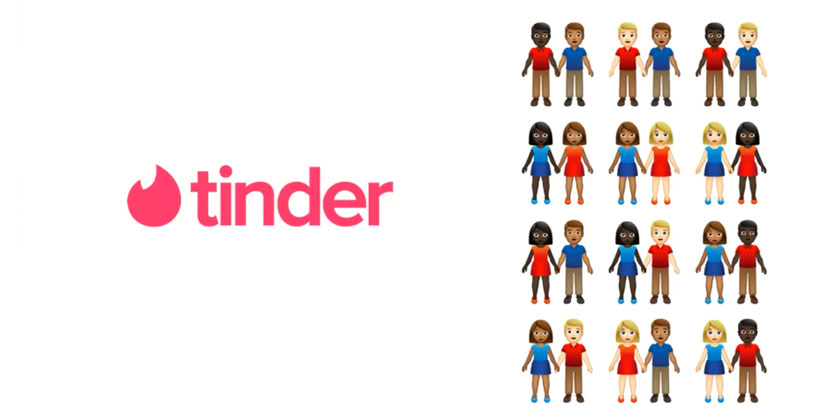 Slightly different Emoji display depending on device and OS

Although pictograms have evolved over the years, there are some that are model-dependent or OS-dependent, and display differently depending on the device, OS, or application.

In particular, there is a case of a dog emoji that was sent as a Shiba Inu but was displayed as a poodle on the recipient’s device, resulting in a slight miscommunication. 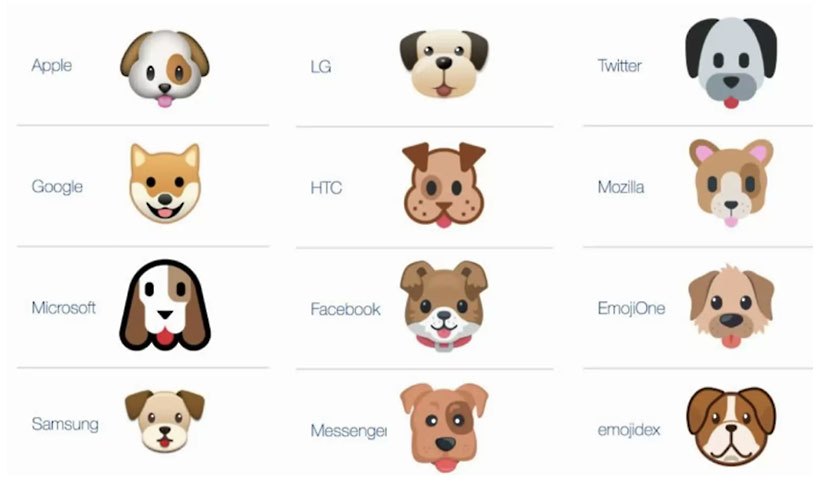 As a side note, there was a case of a hamburger emoji that caused a bit of controversy at one point regarding the device-/OS-dependent emoji. As you can see below, the order of lettuce, tomato, meat, and cheese differed slightly depending on the device, OS, and app; and the debate about whether it was an “official” hamburger raged around the US. 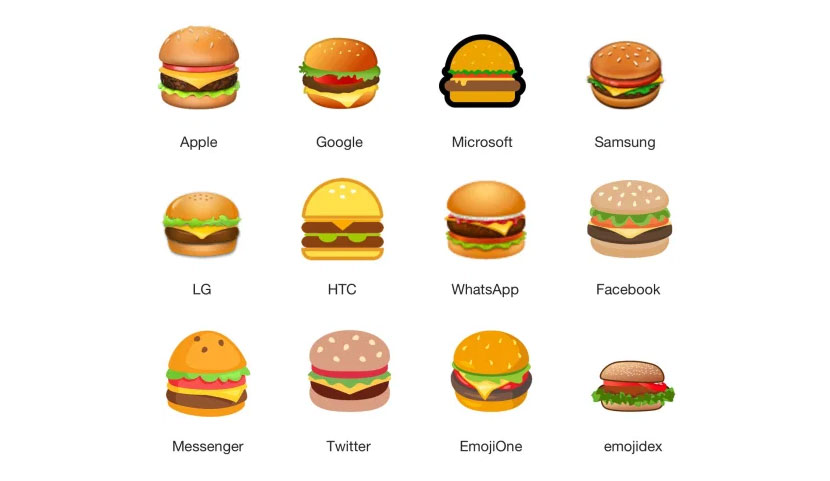 Ramen is very familiar to Japanese people, but it is interesting to see how differently it is represented on different devices, operating systems, and apps. Some are Chinese-style, some are Japanese-style, and the Samsung emoji has people asking, “Is this Ramen?” 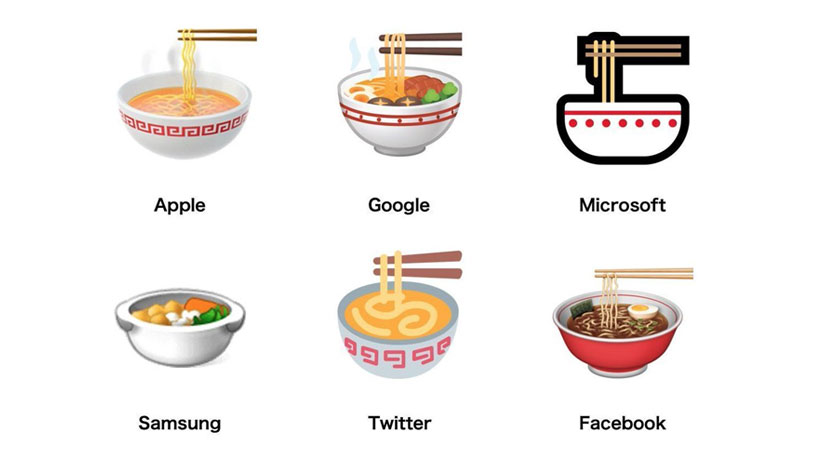 Multiple variations of the ramen emoji 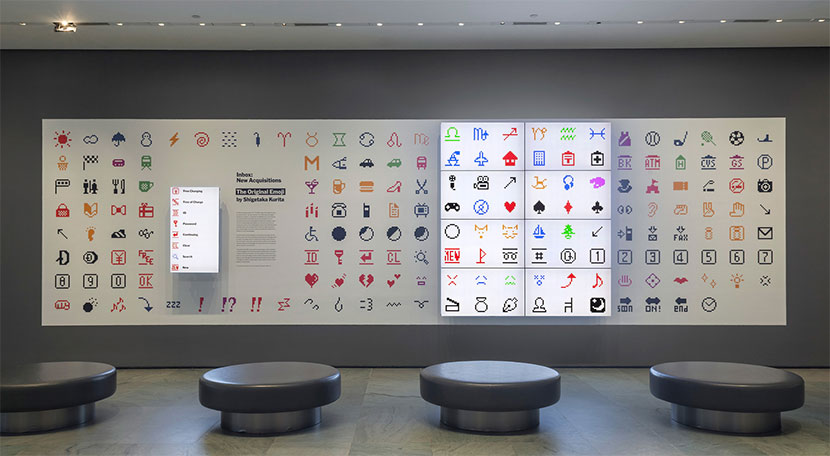 Emoji on display at the Museum of Modern Art, New York

Emoji have become an important part of design elements

Recently, we have seen an increasing number of designs and services that incorporate Emoji.
Clubhouse, a voice social networking service that boomed in Japan a while ago, uses waving pictograms within the app, on the screen for selecting categories of interest, and when searching for a talk room. Emoji are used for each category, making them easy to understand at a glance. 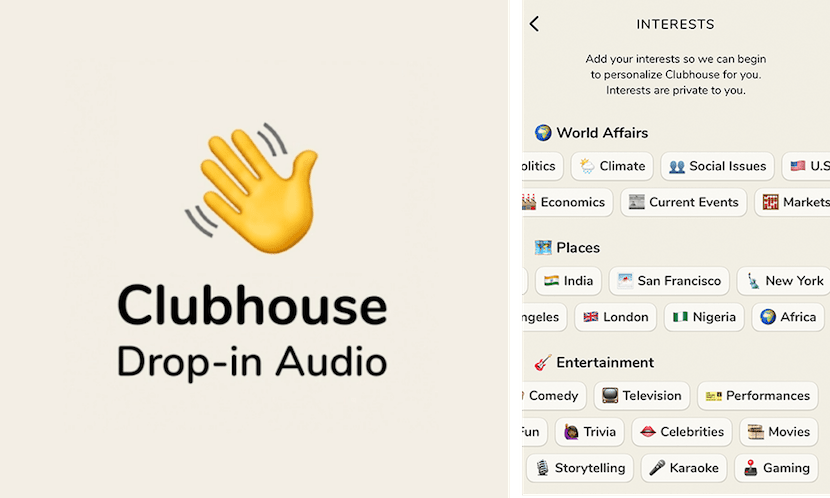 An app to record emotions with emoji

There is also a diary application called “Emolog” that allows you to record your daily emotions with emoticons of mood. Animated emoticons are lined up on a calendar so that you can see at a glance the emotions you have recorded.

If the purpose of a diary is to save the emotions of the moment, this app may make it easier to do so by using emoji instead of text.

There are also companies that create and provide their own original emoji.
For example, IKEA, the world’s leading furniture manufacturer, offers an original pictogram keyboard app for free. The aim is to facilitate communication in the home by encouraging more people to use emoji of household chores and furniture. (Article)

According to a video put out by IKEA, for centuries, there have been misunderstandings and miscommunications between men and women, especially in the home.

As a solution to this problem, they recommend communication using emoji. The idea is that by using emoji, we can expand our range of expression and make it easier for others to understand our requests, complaints and questions.

Emojis have become an essential part of communication

Surprisingly, the emoji “😂” was chosen as the Oxford Dictionary’s Word of the year in 2015. It was chosen because it was the most used emoji in the world that year. That’s how necessary emoji are for communication, and they are just as meaningful as letters. 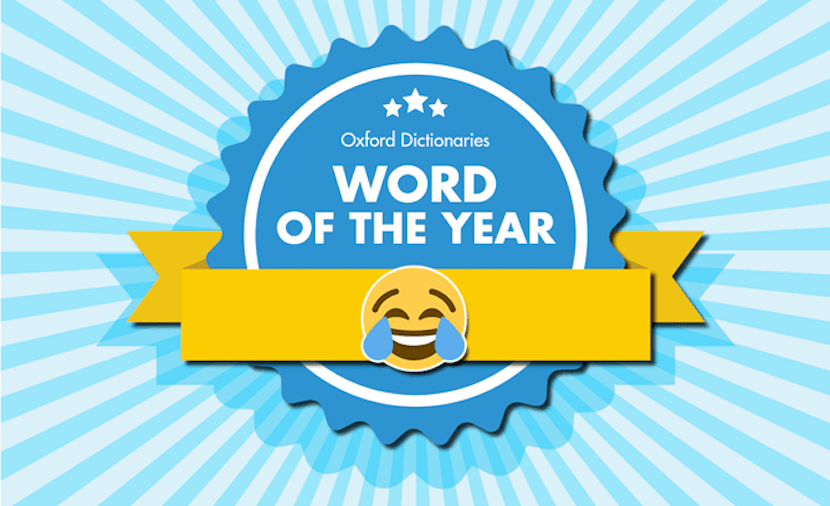 In fact, even if you don’t speak the language, you can use emoji to convey your feelings.

For example, many people use the “Quick Reaction” function to react to other people’s stories on Instagram. This feature allows you to select one of the default emoji and respond to the other person’s story with just an emoji.

In this case, there is no textual information at all, and only pictograms are used to convey one’s reactions, so communication can be universal regardless of language barriers.

Emoji play a role in connecting cultures with different languages, and is a necessary tool for global communication. 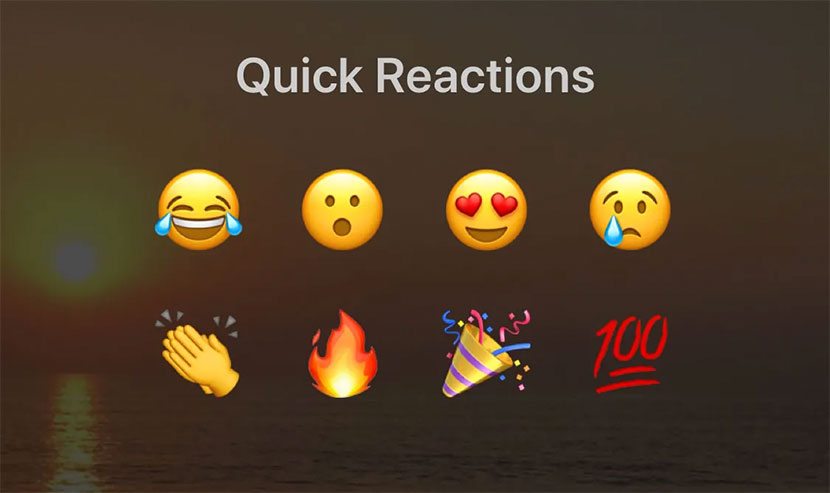 These emoji are very useful, but their meanings may vary from country to country. (Article)
One example is the “🙏” emoji. 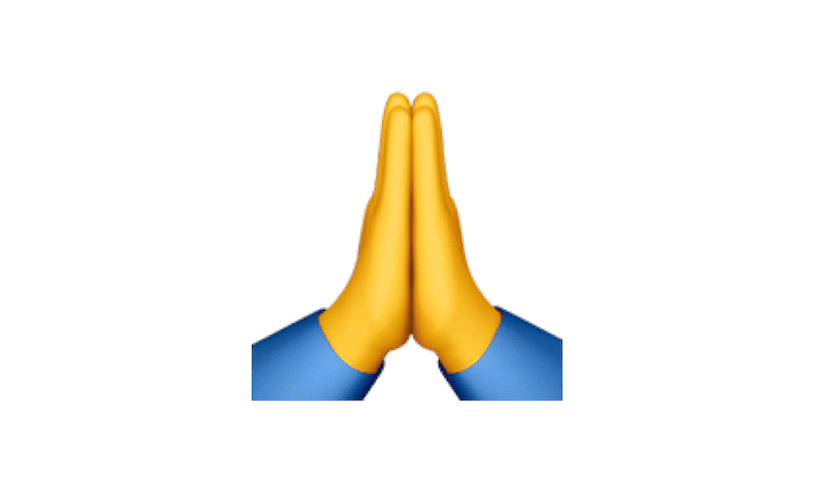 Generally, in Japan, it is used to mean “sorry,” “thank you,” and “please,” but in fact, there are not many countries other than Japan that use this emoji when apologizing. In Japan, it is not uncommon for people to put their hands together when apologizing, and the culture is reflected in the emoji.

However, this hand-clasped emoji is used in other countries to mean “praying person” or “high five.”

There is also this emoji “🙇‍♂️”that is sometimes misinterpreted. 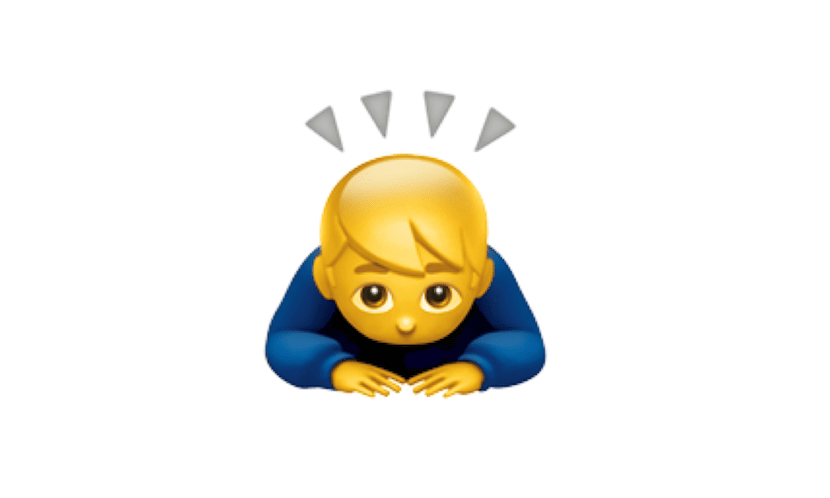 This emoji, which shows a person getting down on one’s knees, is mostly used in Japan as a form of apology, but in other countries it seems to look like a “thinking person” or a “person doing push-ups.

This emoji “💁‍♀️” also has different meanings in different countries. 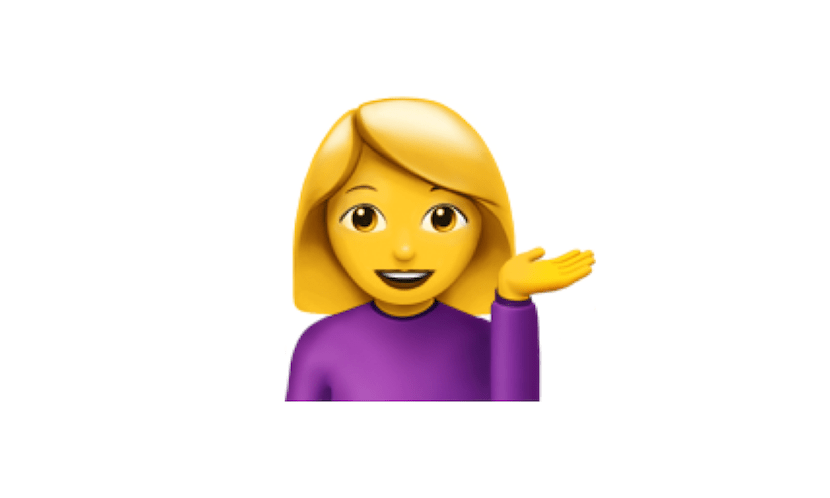 In Japan, it means “guide” and is used when you want to say “this way,” but in the U.S., it is often taken to mean “whatever (it doesn’t matter). In contrast to the polite impression in Japan, it contains a somewhat negative element, which changes the meaning considerably.

In order to avoid misunderstandings, it would be good to understand the differences in perception between cultures before using it.

As designers are expected to become even more globalized in the future, this kind of understanding between cultures will become necessary when incorporating emoji into services and designs.

Designing user experience with the global market in mind is key

It is important to design services with the assumption that they will have users globally. The emoji introduced here can be said to be global design that more easily enables communication across language barriers.

In order to create this kind of design and apply it to services, one step is to design an optimal experience for international users based on their needs, such as by creating prototypes and design mockups.

btrax is proud to serve as a cultural liaison between Japan and the US. Interested in using emoji in your marketing collateral? We can help you understand when, how, and where to use emoji in your messaging to Japanese consumers.