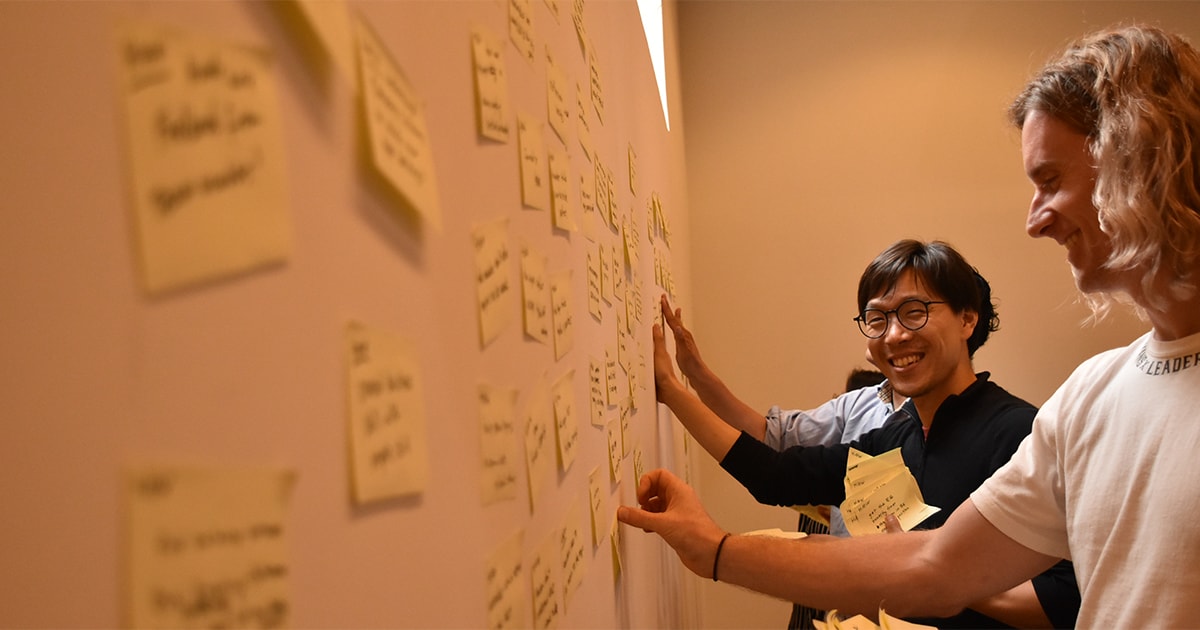 I may be smiling in the picture above, but I was really going through growing pains doing HMW (How Might We) brainstorming on the wall with our Director of Design and Development, Jensen Barnes (JB).

The following are reflections on my first design sprint and some tips that might help other designers when preparing for a sprint.

Experiencing my first design sprint was a great way to learn about my skills in the heat of the moment. Surprisingly, where I felt pressure was when I had to communicate to the rest of the team about my own research, findings, ideas I brainstormed, solution sketches, and all the activities involved in the process of the structured timeline.

The pressure was coming from within myself and I can clearly remember wanting to describe and communicate to the team more effectively about the ideas and sketches, but I was overdoing it, leading to confused looks on the team members’ faces I could have avoided.

Sketch/write the bare essentials that clearly communicate the useful idea/concept. Plainly describe how it can be useful.

How? Prepare before the sprint by practicing describing a sketch/idea in structured 1-3 minute time slots. Reflect on whether that really was the bare essentials to getting the idea across to one another. Incorporating this habit into your daily routine will be very helpful.

Where I felt most pressure was during our storyboarding time after the decider had chosen which rough storyboards to go with from the team. I felt myself wanting to please the team with the black marker in my hand in front of the big whiteboard.

I was clearly not suited for the role because I didn’t understand the flow of the rough storyboard chosen by the decider (which was a vague goal as well), yet I was assigned to draw. I kept asking those whose rough storyboards were selected to describe to me what happens here and what happens there.

I was trying to get answers and trying too hard to listen to any critique or suggestions about this or that inside the hypothetical app without my creative contribution. My mind was scattered and I’d lose sight of a simple breadcrumb or navigation button UI. What I thought was a better skill of mine, spotting patterns in things and drawing them out, I could not deliver here due to my inexperience. It was wasting everyone’s time.

How? Understand the many user flows of your particular sprint’s prototype platform (an app in this case study). Understand it to the level you can sketch them out, not describe it in words. I felt this was the most critical part to contribute as the designer in a sprint, so prepare well here.

It is important to clearly understand the objective of the prototype. Zooming out from the detailed sketching inside the prototype to an understanding of the sprint goal will help in designing the flow at the entire scale.

TIP #3: Zoom In and Zoom Out Deliberately!

How? Have a rough number of screens set to design (in our case, we wanted 16 screens, though we eventually made more than 20 to communicate the idea in the prototype) and use this number to figure out how much time to allot for each screen. Keep yourself disciplined and on time and let the time constraints force you to make decisions.

In other words, you don’t have much time, so fretting over it will make you lose focus. Keep the big picture in mind while doing the details by understanding how much time to allot for each screen. Write them out on one big whiteboard to physically represent the zooming out. This will be very valuable so you can maintain your inner compass.

With a direction chosen, the prototyping phase was a joy. I ended up pulling an all-nighter with Mimi (UX Designer), but we were in our element working in front of the computer once more.

It was my first time thoroughly using Sketch and InVision but I was able to rely on my experience from having used the Adobe Creative Suite for years. It was my first time getting to know the Noun Project for choosing icons. Without JB’s (lead director/designer) help directing us to use these tools and to make a satisfactory logo quickly, I would have taken much more time.

It all started making sense to me why these tools are made in the first place. They are made to save us time. Prior to the sprint, I had always had the mentality of taking pride in building from scratch, but there’s just no time for it in a sprint environment because it really doesn’t matter if you can build from scratch or not. It really opened up my mind about rapid prototyping and the value it can bring to people and the project.

Tip #4: Partner Up Close and Afar!

Sit next to your partner side-by-side and build the prototype together to make decisions there, while an experienced overseer helps from afar by sending you materials to use in the prototype.

Have Tic-Tacs or gum because you’ll start to stink in the process and can still be so fresh and so clean next to each other and when the designer from afar comes by to check in on the day’s work-in-progress.

As I write and reflect on the experience, my eyes are filling up with tears. They are tears of perseverance through the emotional ride I had experienced on this rollercoaster of a week. The cold sores in my mouth and on my tongue were grinding against my teeth every time I spoke starting Monday, my bicycle was stolen on Tuesday and I didn’t have the time to report it to the police because I wanted to focus on the sprint.

The sleep-deprived days from Wednesday and Thursday turned into sore throats and cold sweats, and these were all terrible, but it was such a joy to reflect on because on Friday you get to see the work pay off in front of the selected users in user testing.

The whole process is a joy because only through this kind of rigorous framework of building and testing did I really get to know much more about myself as a designer and as a human being at this moment in my life.

What I am most happy about are the meaningful relationships I have built with the team. They are your friends and heroes through the process not just during the sprint but extended into daily life. You learn so much about each other’s critical thinking, reasoning, and intuition.

We are all here to help one another, to laugh with each other and to be critical of one another. As designers who dream and work hard to design our own lives, I believe we understand the value of collaboration, so share this with your team and your clients in the sprint with you as well. In a sprint, you understand everyone’s strengths in the heat of the moment.

Be honest about what went well, what helped in the process, and what could be better with your teammates, and communicate it without being shy. Exercise being open-minded about spreading the love in an objective way! You won’t regret it moving forward in business with the clients and with the teammates you live and work with on this planet.

That’s someone like JB (I mention him here even if he would humbly decline). This type of person who exercises being wholesome and absolutely detail-oriented for the sake of creativity will help you and the team realize that designing is fun, like how it’s supposed to be.

Having a designer who lives to inspire oneself and see the importance of empowering those around him/her by spreading the joy of the growing process is so motivating in what could become a dreadful sprint week if the lead were a jackass. Leads matter. Similarly, don’t be a jackass yourself: everyone’s attitude matters in the building process.

To all who read this, understand that design is about opportunity, challenges, turning relationships to friendships, and eventually becomes part of what we leave behind. May your design sprint do the same, if not better, for you and your team. May it help everyone involved understand that we all have choices in the process of discovery.

I had this song on repeat especially on Wednesday and Thursday. Different strokes for different folks but why not try some Tibetan morning Buddhist chants?

Personal thank-you’s to everyone involved — JB, Aki, Yu, Mimi, Brandon, our client, and our user interviewees.

Note: Originally published on KJ Kim’s Medium and adapted with permission from the author.