Towards the end of January 2021, about a week after the new president of the United States completes his inauguration, there began a huge boom in the Japanese internet sphere. To be more precise, starting January 25th PST or January 24th local time, an influx of people in Japan flooded into an app called Clubhouse.

Within a week’s time period, Clubhouse became one of the hottest apps in Japan, making it the second-largest community outside of the US.

The timeline of Clubhouse craze in Japan (local time)

Clubhouse’s ranking within Social Media in Japan by App Annie

The trend seems rather strange

This particular app is another social media service but only for voice media. Given the fact released in March 2020 and developed by a startup in Silicon Valley, it seemed a bit bizarre that tons of users on the other side of the globe all of the sudden started using it, posting screenshots, and boasting that they’ve got more invites available.

So why Clubhouse; why now?

Let’s see what we know so far by people close to the trends as well as what other Japanese media say.

The service seems nothing new

There are actually other voice-based social media services out there. And some of them are made in Japan. Such services include Stand.fm, Dabel, and LINE, which is one of the most popular apps in Japan. So why are people so attracted by Clubhouse? We have found a few key factors that contributed to the phenomenon.

One session by the tech leaders pulled the trigger

According to the person in the Japanese tech community who talked about what caused the boom, he says there was one talk session on Clubhouse by the industry thought leaders including Shintaro Yamada from Mercari, Kazuma Ieiri from Campfire, Yuta Tsuruoka from BASE, and Ayataro Nakagawa from Stand.fm.

The session by the tech leaders took place at 7pm on 1/24 local time.

Those people drew huge attention from the audience by announcing the session via other social media channels such as Twitter. 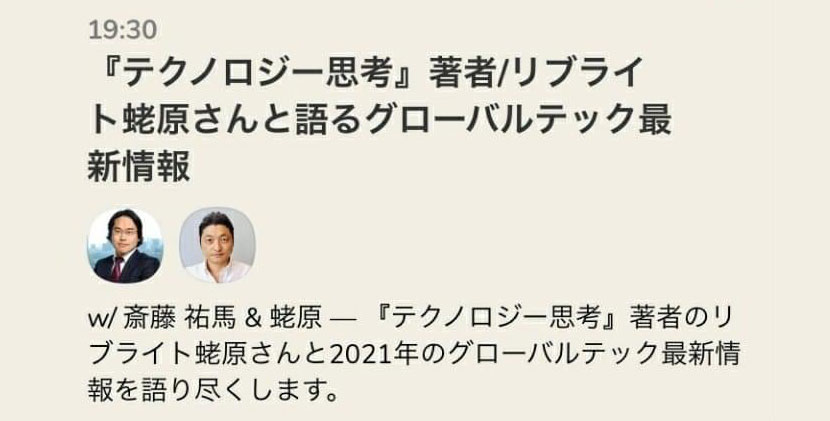 The funny thing about this phenomenon is the fact that the service is developed by the startup in Silicon Valley, or the San Francisco bay area to be more accurate. Though there were other options available in Japan, the Japanese internet users do still love what comes out of the valley. That also contributes to the success of Clubhouse.

The Japanese smartphone market is known for a higher percentage of iPhone. Comparing to the overall global market, Japan heavily skewed towards a higher rate of iPhone users. Considering Clubhouse still only available for iOS, it makes sense that more Japanese users could download the app on their phones than the rest.

Another potential factor could be how users join the service. It technically is not available to the general public yet: you need to get an invite from an existing user. This created the situation that many people started shouting “Someone, please give me an invite to Clubhouse.” Or “I have a few extra invites to Clubhouse.”

This creates a sense of “entitlement” which boots users’ egos to just get invited or even be able to send out invites to someone who is dying to receive one. People even started selling the invites via the internet. Eventually, the influx of the word “Clubhouse”

Clubhouse invitation sold in Japan for over $60

Whenever many Japanese have started using Clubhouse to express their impressions on social media, others feel frustrated that they are getting left behind. Yes, it is the feeling of Fear Of Missed Opportunity.

FOMO is a common occurrence in social networking services. FOMO marketing has been used in the past to distribute the load of services.

FOMO marketing has also been used in the past to spread a load of services, such as the social networking sites Friendster, Orkut, and Japan’s mixi, as well as Gmail, which started out as an invitation-only service. The more popular a service becomes, the more people who have not yet been invited to it become in a state of FOMO.

And this Clubhouse provides only two invitations for a user.

This was a brilliant piece of FOMO marketing, a starvation situation where the supply was less than the demand, and it seemed like it would penetrate the market at a 1:2 reproduction rate… However, considering the Clubhouse culture, it seems that the nomination culture is more important than the invitation culture. It is important to know who nominated and invited this member to the clubhouse.

Famous celebrities started getting on the bandwagon

The final push, a big one to the craze, is that celebrities in Japan use Clubhouse. I mean many of them. They join the sessions along with college professors, tech entrepreneurs, and general users to talk about various different topics or some professional singers sing their songs along with other users.

This provides very unique opportunities for users to interact with their favorite idols. This could almost never be possible before. It is not quite surprising Clubhouse became a huge magnet to celebrities’ followers. 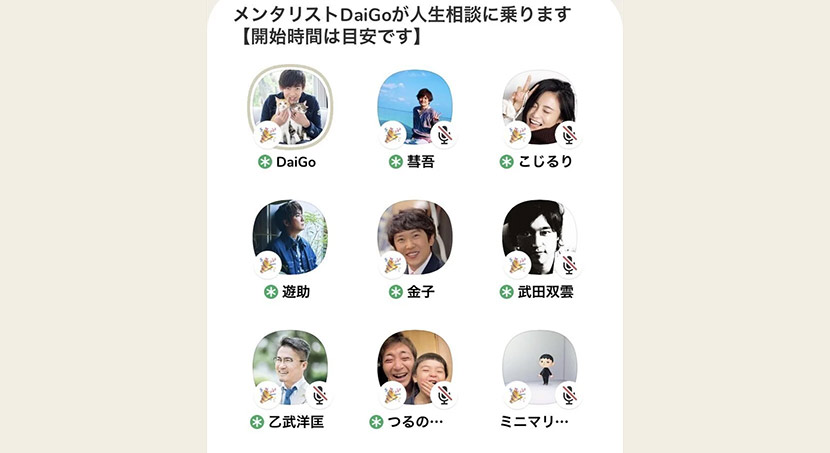 Japanese celebs jumping on the trend

Social media for “everyone”

Clubhouse in Japan, however, is very interesting in that it seems to have spread to heavy users of the Internet, celebrities, audio media, print media, video media, the younger generation, and the baby boomers all at the same time in the span of a week.

You don’t even have to look neat

Japan is a country known for its cleanness. It’s not only the cities and public restrooms, but people do dress very nicely. Most businessmen wear suits and tie while women wear polished makeups. As a voice social media, it goes without saying you do not have to worry about how you’d look in front of your phone. This easiness must add huge value to the users in Japan. 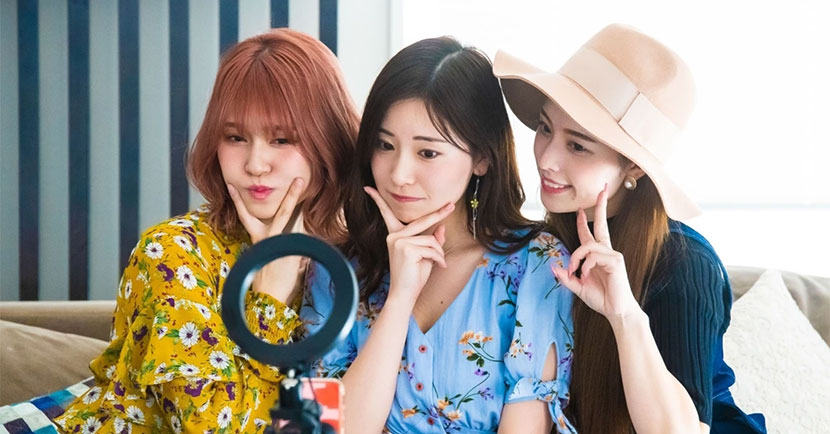 It is common in Japan to dress neat and wear makeup

Of course, there are many people who are proficient in using both, but basically, text services like Twitter and blogs have more people who are good at writing.

On the other hand, Clubhouse only requires you to speak.

When you think of “speaking” in conventional voice services, many people think of professions such as radio personalities or voice actors, but Clubhouse is not about that particular type of voice content, but about the “talking” that everyone does every day.

Of course, each person has his or her own strengths and weaknesses, but compared to writing long sentences or creating captivating video content, the hurdle is much lower, and it’s something that everyone does every day.

Many Japanese people are seeking ways to “meet” people

With the current situation of the pandemic, it has become way harder to meet people. Japan is not an exception. They especially struggle when they cannot have “Nomikai” or drink parties, which have been the primary method to break the ice with people.

Clubhouse has definitely taken the place of the “chance encounters through chatting” that used to be possible in real life drinking parties and events, which had become difficult in Japan under the declared state of emergency.

For many people, Clubhouse has given them a lot of energy to chat and chit-chat, without which they had to endure for the last year. It brings back the sense of “community” to them.

They feel once again that chatting with others is the greatest entertainment of all. 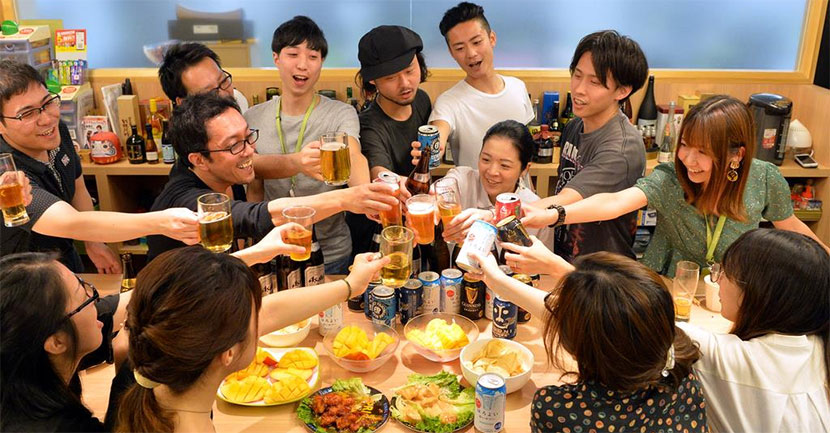 People in Japan are dying to have Nomikai (drink party)

Is this a fad or real?

I don’t know how long the current boom in Clubhouse will last.

Like other web services in the past, it is possible that we will quickly become bored with the service, and it is also likely that our users will disperse as competitors imitate us.

Given the fact that Twitter generates the second largest revenue in Japan next to the US market, the bright future for Clubhouse in Japan may be coming soon.

If you are interested in the Japanese market to grow your business there, please feel free to contact us. We are always here to help you.