Some common themes among the 3 case studies are the brands commitment to quality products, offering experiences that go beyond buying of the actual product and providing a location/space that makes people want to take and share photos & videos. The common theme among 3 brands is instagenic- a hybrid word combining Instagram and photogenic meaning. Besides instagenic, there are 2 keywords, craftsmanship – a commitment to creating quality products and user experience – prioritization of experiential value.

Dandelion Chocolate is a craft chocolate company based in San Francisco. It is well known in the States for its commitment to manufacturing quality chocolate. They opened their first shop and cafe in Tokyo in 2016, and have been embraced by Japanese people.

Surprisingly they chose Tokyo, not another city inside the US, as a place to expand after San Francisco. Apart from meeting a trustworthy partner, Mr.Seiji Horibuchi, Mr. Todd Masonis, the founder, gives 3 reasons to Dandelion’s success. Firstly, he knows that Japanese value craftsmanship, which is core to Dandelion Chocolates.

Secondly, since lots of Japanese tourists have visited the Dandelion shop in San Francisco, asking him to open a shop in Japan, he knew that there was a demand in Japan. Thirdly, “regulations around processing food are less strict in Japan than in US.” as Todd Masonis, CEO and co-founder at Dandelion Chocolate, recently said when he spoke at a Japan Society event. 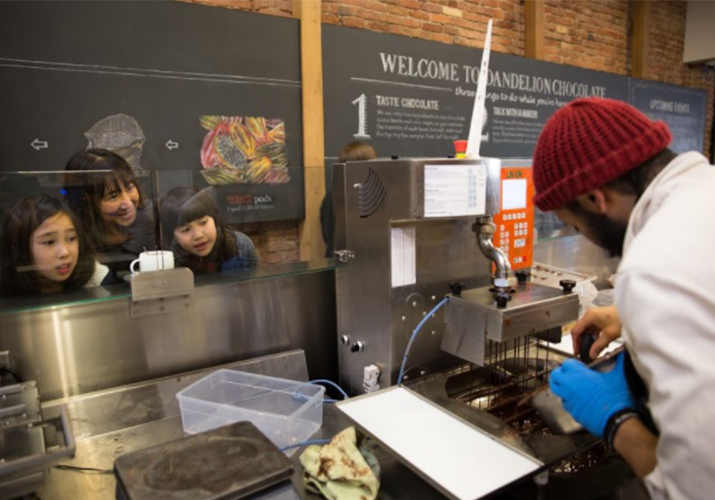 After 2 years, they now run 3 shops in Japan and have been featured by media including a TV show, and a magazine. They featured how dedicated to making quality chocolate Dandelion is. Its shop has a cafe space and many people come to enjoy the pastries and hot chocolate. Why did Dandelion become so popular even though their prices are higher than their competitors? I interviewed several people who are Dandelion consumers. They said, “I don’t think it’s too pricey since sweets are getting more expensive these days. It’s worth it” “It’s a little luxury experience, which spices up the boring routine everyday life.” commented a stay-home wife in her 30s. 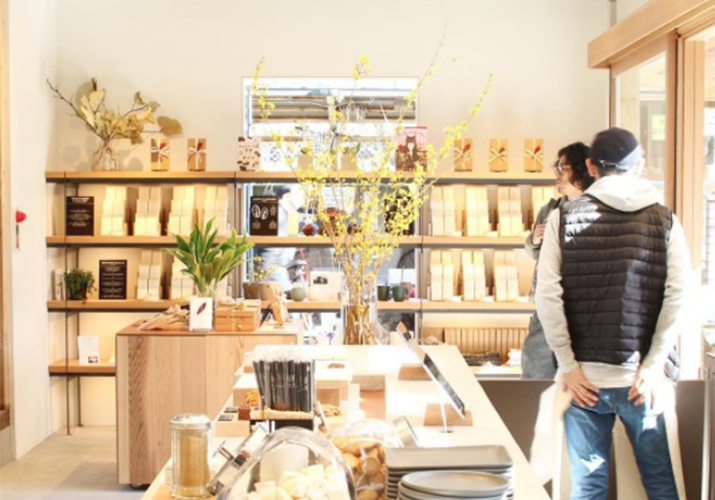 “I am not interested in chocolate, but I came here to take an instagenic picture and post it on Instagram to get more likes.” said a female college student, who came to Dandelion Chocolate for the first time with her friends. “I don’t often come to this area, but I want to bring Dandelion Chocolate as a gift to a party I am going to today. I am excited to impress my friends.” said a working professional in her 40s. By listening to fans, it attracts customers not only for its high quality chocolate but also the atmosphere including interior, lighting, dishes and cups, which enable customers to feel luxury, and take Instagenic pictures.

Lululemon, the popular yoga wear brand, launched in Japan in 2016. It now has two stores in Tokyo, and is planning to add more stores in Japan. Although very few people know about it, Lululemon initially launched in Japan in 2004, but withdrew in 2008. Looking back on this experience, Lululemon analyzed why it failed. It found out 3 reasons. Firstly back in 2004, yoga was not as widespread as it is today in Japan.

Secondly, almost every yoga place in Japan has a changing room unlike in the US, where it’s pretty common for people to go to a yoga studio and then go home wearing their yoga clothes. Thirdly, it made a distribution agreement with a Japanese retailer but were not very involved in developing products or personnel education, it failed to control the Lululemon brand image.

Did Lululemon learn from their mistakes? Yes. It re-entered the Japanese market last year, and it seems that it has strong and long-term strategies in place, emphasizing the process of customers getting to know its products. It has been focusing on building community and a fan-base through regular workshops at a showroom, built in 2016 in Harajuku, a center of Tokyo.

Lululemon has a local-based policy, which they have applied to promotions in Japan. It has been focusing on creating a connection with local people through organizing lots of workshops and pop up shops outside of Tokyo. Normally an American brand likes to open a shop in a big city, whereas Lululemon, along with having a Tokyo shop, is going to the countryside of Japan and trying to create a local community-based brand.

Lululemon Japan has its own Facebook page, and you can find lots of events organized by Lululemon. What differentiates it from other sportswear brands is that they organize events outside of Tokyo, such as Fukuoka and Ibaraki. Through organizing lots of sports events, Lululemon is fostering a connection with customers. 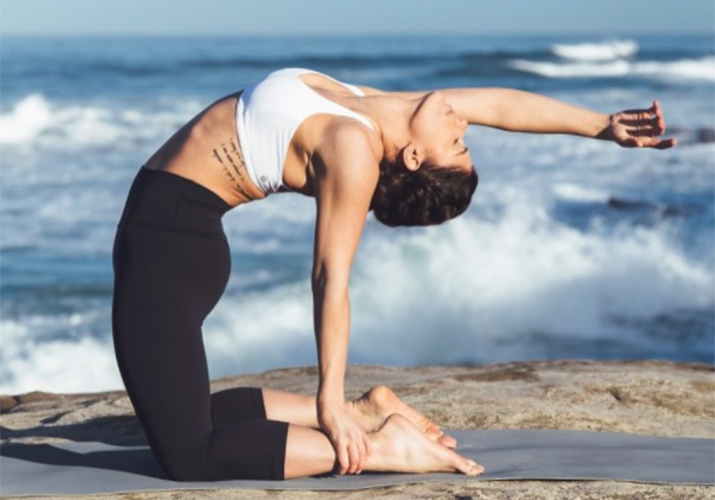 You can easily find positive comments about Lululemon’s launch in Japan “I’m so excited to go to the Lululemon store! It’s very cool that I don’t have to order online anymore.” commented a huge fan of Lululemon. Yoga bloggers in Japan have commented with, “I love the quality of Lululemon. It’s a must-have item among avid yogis in Japan” or “I started Yoga to wear cute yoga clothes. It’s a little bit more expensive than what I used to buy, but I am more motivated to go to Yoga thanks to Lululemon.”

Lululemon is not only exciting those who are already fans, but they are also attracting new customers and building a solid fan base.

Brooklyn Charm is a make-your-own jewelry studio, started by a couple in Brooklyn in 2010. Before launching in Japan, Brooklyn Charm was well known among Japanese as it was featured on several TV shows and it’s considered a must-go place when they visit NYC.

It opened its first shop in Tokyo in 2014, and now has 5 stores in Japan. In 2017, they changed their name to BOX CHARM Industry. 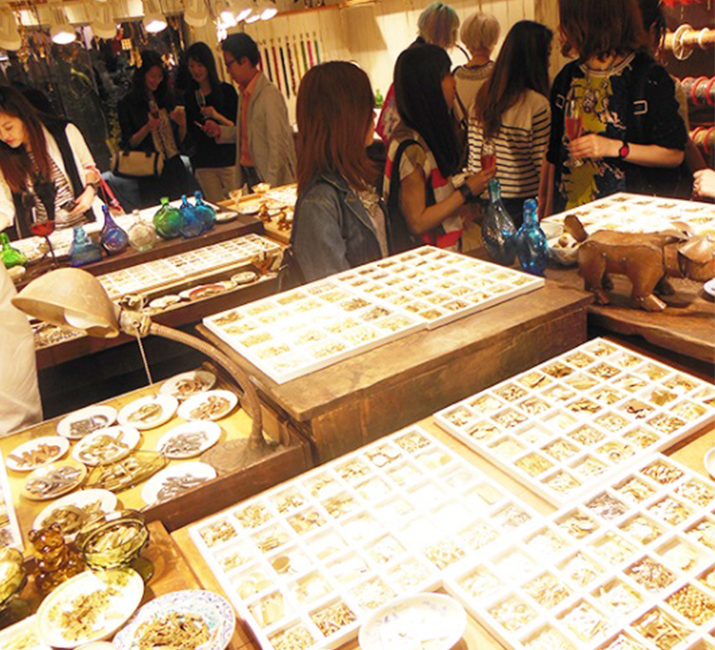 At Brooklyn Charm, there are various kinds of charms and chains. Customers can pair any charm with any chain. It has recently updated the customer experience emphasizing the “customize” aspect where customers can make their own packaging along with creating accessories.

According to research on the Japanese market by EY in 2014, “it is expected that consumers will have a greater tendency to prioritize not only physical value and price, but also a broad variety of other factors.” Whereas other accessory brands attract customers with only design and quality of a product, Brooklyn Charm wants to provide a full “experience” covering everything from going into the shop, customizing an accessory and package to wearing it on a daily basis or giving it to those they care about as a gift. 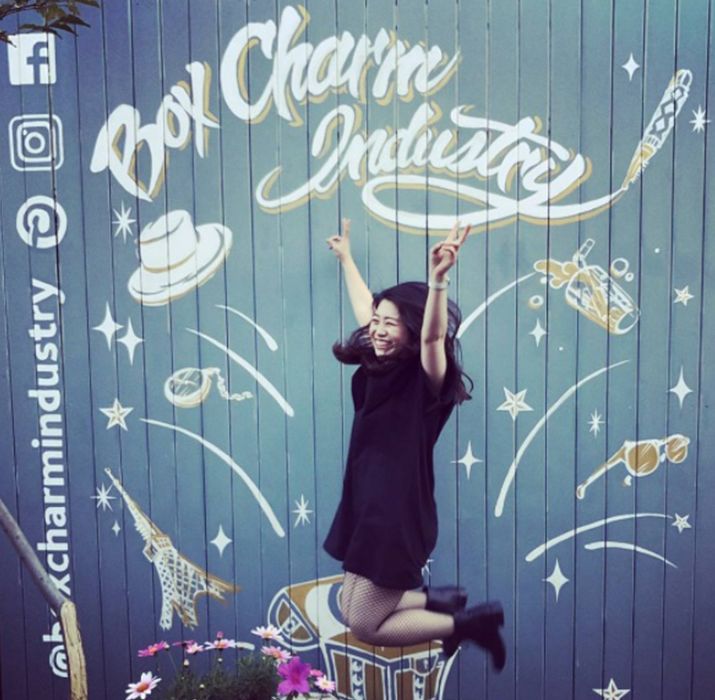 As a “cool spot” in Harajuku, a source of fashion for young adults, the area attracts not only people who live in Tokyo but also tourists from all over the world. Since it provides a new experience for customers, people want to share that they went there, showing that they found a “new and cool spot”. Besides creating a great experience in the shop, Brooklyn Charm has an instagenic wall art, which is a colorful and eye-catching painted wall outside the shop. You’d be surprised by how many people come to the store just to take a picture in front of the wall.

The three brands discussed have a few common characteristics in their dedication to connecting with Japanese young adults.

Compared to previous generations, Japanese young adults have easy access to all kinds of information. 30 years ago, very few people knew what trends were popular outside Japan. Now, however, when you go online, you can access information about anything, anywhere. With that information at the tip of your fingertips, Hakuhodo Innovation Design says young adults are longing more for “American” style.

With that being said, brands which established a solid reputation in Western markets are advantageous to tap into the Japanese market. Young adults in Japan have a unique taste, which may be difficult to understand but now you know a few key factors to help you start thinking about how to enter Japan.