Any global company should know the importance of localization – to be mindful of the target culture and adjust their services or products accordingly. User research is not an exception, and it is crucial to devise appropriate methodologies and documents that go beyond direct translation.

As a researcher who has conducted user research in both the US and Japan, I had the opportunity to talk at the btrax event, Uncovering Japan, hosted on Nov 10 to discuss cross-cultural differences when doing user interviews in Japan and the U.S. In this article, I will share key insights on three aspects of user interviews:

Another unique methodology that works in the US is man-on-the-street interviews–meaning we can just ask someone on the street and they will be willing to do a short interview. 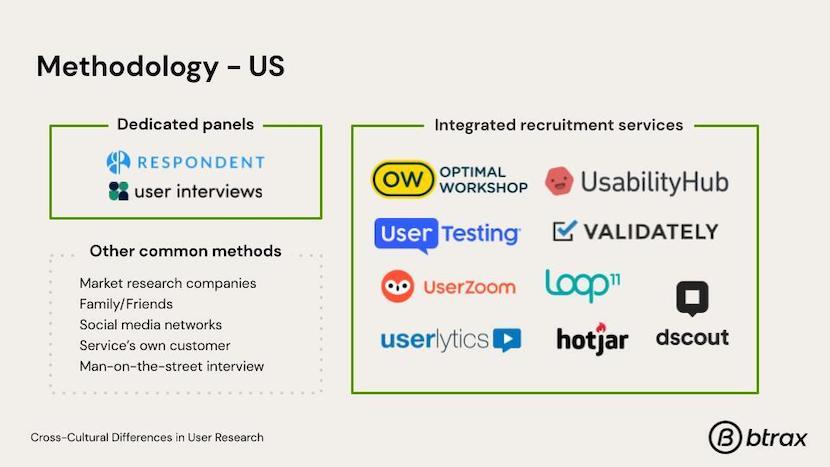 🇯🇵 However, some US methods of recruitment won’t work well in Japan. For instance, man-on-the-street interviews are very difficult to conduct for cultural reasons, as the Japanese aren’t as comfortable with sharing their opinions with strangers.

There is also a major difference in the landscape of user research. The industry is relatively new in Japan and does not have many services that are specifically for user research. Instead, most recruitment is done through market research agencies, which can result in differences such as:

Recently, some US/EU user research platforms have started to expand into Japan, though it is still not at the scale to overthrow the domestic agencies. Occasionally, crowdsourcing sites are used when the target is not as niche. 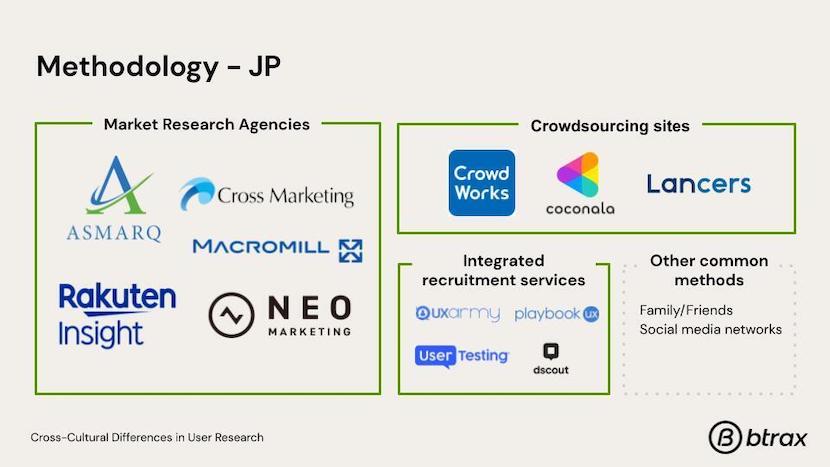 🇺🇸 The US is a very diverse country, and it is important to consider various demographic factors such as ethnicity and geography when recruiting.

🇯🇵 On the other hand, being an island country, Japan is relatively a homogenous country. While it is important to be mindful of demographic factors, they are not as important compared to the US.

Though, one thing to consider is the geographical regions. Japan has three major metropolitan areas, and daily life in these regions, as opposed to the countryside, can differ significantly. 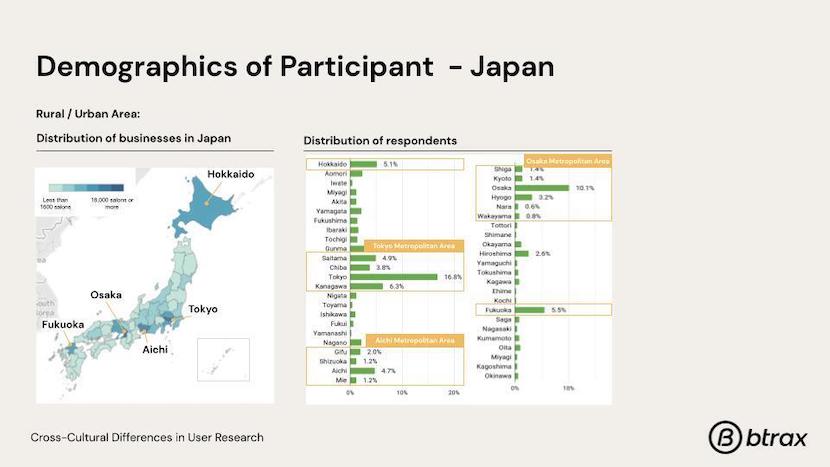 Survey result for a project

Often, companies simply translate the script and materials to use in the interview. However, this method will not work well in Japan as it is crucial to consider the cultural background of terminologies that are mentioned in the script. 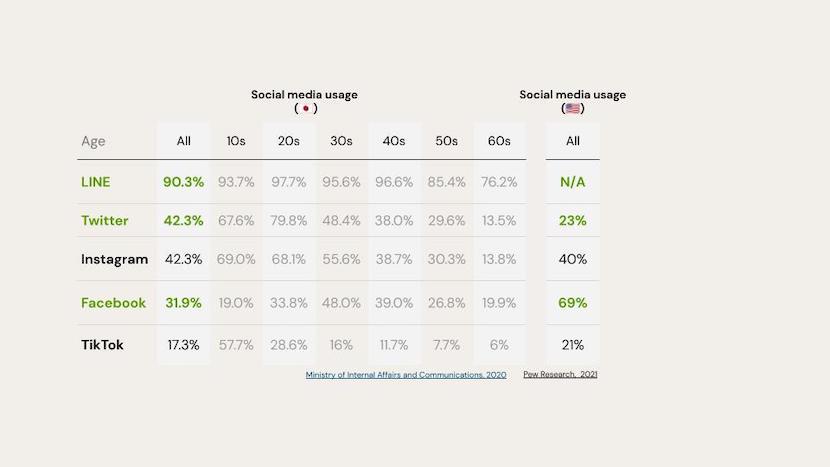 🇯🇵 However, as shown in the chart, the distribution is quite different in Japan. For instance, LINE, a messaging app similar to WhatsApp, is the most dominant service used in Japan. It is so essential in day-to-day communication that many companies use LINE and email to communicate instead of text messaging. 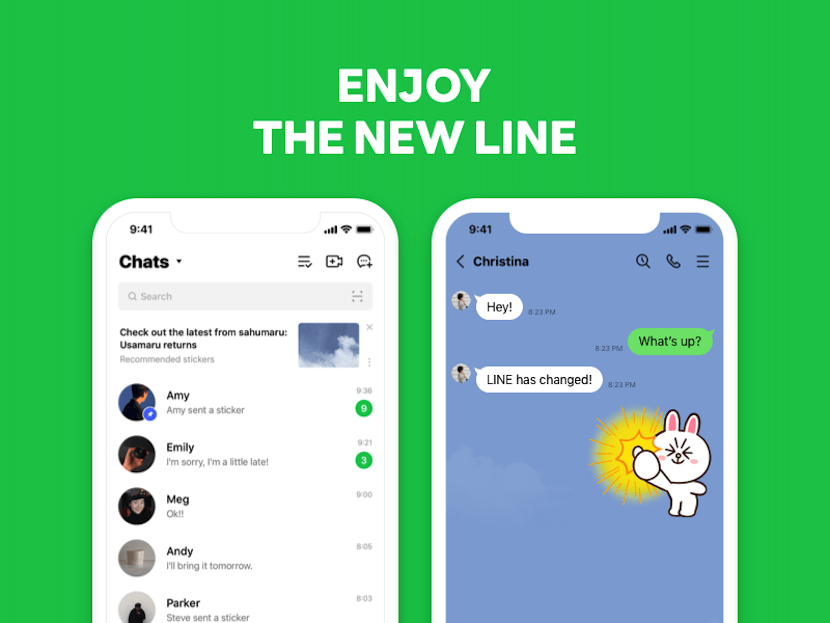 Another interesting media to point out is Twitter. In Japan, people use this media to obtain real-time information, but it is also considered as a platform with raw and honest opinions.

Since it is not a common practice to publicly state one’s opinion in Japan, Twitter is appreciated for its anonymity where users can express their opinions without visible consequences.

It is also important to note that the term “social media” is used slightly differently between the two countries. For instance, in Japan, “SNS” (the Japanese term for social media) is associated with Instagram, Tiktok, Twitter but not LINE. However, in the US, it would be natural to consider WhatsApp as social media. 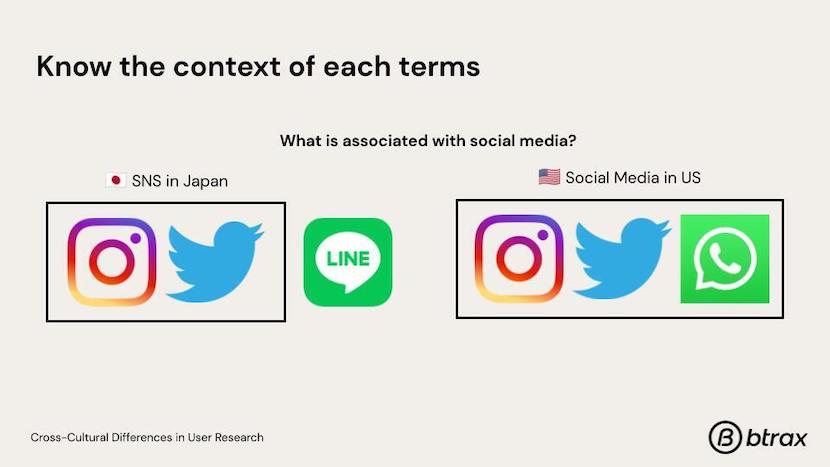 In order to understand how each question is perceived by the respondents and appropriately evaluate the responses, it is crucial to understand the context of the tools and terminologies.

Another danger in direct translation is the use of Katakana, a type of character used for loan words from foreign languages.
Many non-Japanese companies (even the big firms that have localized in Japan!) make the mistake of using too many Katakana words. 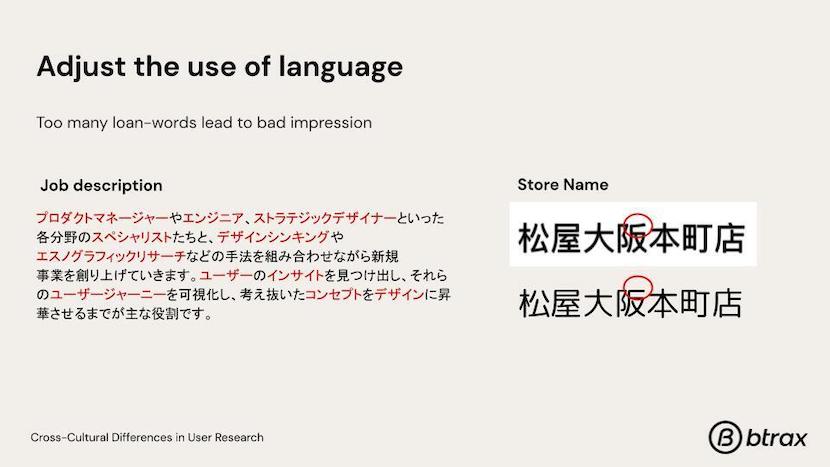 *Right photo: job description from a company; red letters are Katakana form of loan words
*Left photo: the photo above is in Chinese characters while the below is using Kanji (Japanese characters). Very subtle difference, but users do notice the difference.

However, using too many Katakana words often confuse Japanese participants and/or gives off a very snobby impression.

Thus, it’s super important to ensure that the script is QA-ed by a Japanese person to make sure that it is in the right tone.

When conducting the interview, there are some major cultural differences that will affect how interviews should be conducted.

🇺🇸 In the US, people are not hesitant to have a discussion with one another. As such, it is crucial to have a moderator who can ensure to keep the discussion on track. 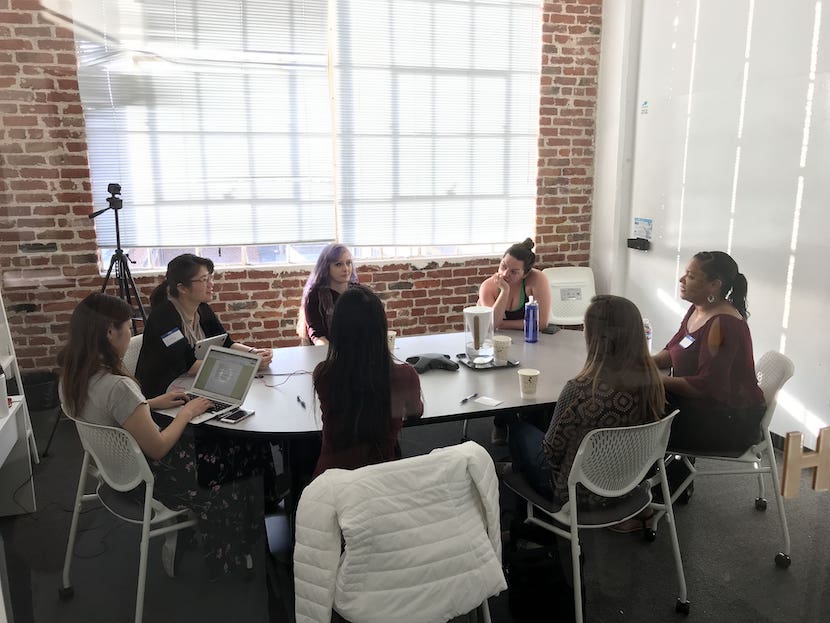 🇯🇵 For Japanese participants, having a discussion and stating honest opinions in front of strangers is not as comfortable. In focus group interviews, participants often agree with one another or wait until questions are asked by the moderator individually.

As such, moderators must make them feel comfortable, and ask a lot of follow-up questions. However, this is often very hard to do in Japan (in fact, I have never done a focus group interview at btrax for Japanese users!) (Related article: https://blog.btrax.com/first-business-meetings-in-japan/ )

🇺🇸 In the US, it’s not hard to get people talking. They are not afraid to share their opinions, and will voluntarily expand on a point. This is why unmoderated interviews and/or read-aloud works well in the US.

🇯🇵 However, in Japan, it is difficult to get participants to open up immediately. Many Japanese participants are nervous at first, and it is often to hear them say things such as “I don’t know if I can be helpful” or “Is my answer appropriate?”.

This is why it is crucial to take extra steps to make participants feel more comfortable such as:

Since Japan and the US are vastly different countries, it is very very important to localize the research before you begin. You must:

At btrax, we support companies entering the Japanese market and specialize in providing multifaceted design research, including Japanese service research and interviews with local users. If you are interested in this service, please feel free to contact us.

Please take a look at the full video from here: