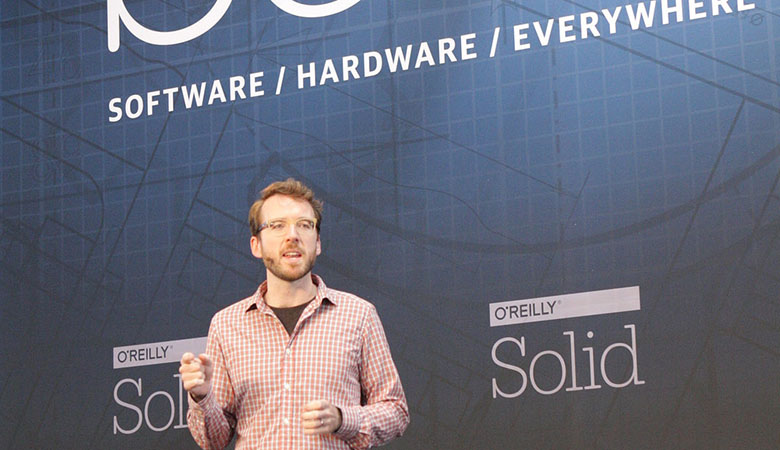 How the Internet of Things Will Change Our World

John Chambers, CEO of Cisco, recently said that the Internet of Everything could be a $19 trillion opportunity. “This is not about technology at all,” Chambers said. “It’s about how it changes people’s lives forever.”

With that in mind, btrax’s Innovation Strategist Tim Wagner sat down with Jon Bruner, Director of Hardware and IoT at O’Reilly Media and co-chair of the Solid program, to chat about the future of IoT and how it could change the way we think about the world around us. O’Reilly’s Solid Conference on from June 23-25 focuses on the intersection between software and the physical world.

Tim: The Internet of Things is a pretty vast product category – what do you see as the core differences from the world we live in now and the coming IoT world?

Jon: The Internet of Things is about helping software reach into the physical world–especially the kind of software that makes sense of “big data” that we’ve seen arise in the last ten or so years. Think of the change that this kind of software has brought about in areas like retail, finance, advertising, and publishing, then extend it to practically everything.

The connected world will be more intelligent, and as a result it’ll be safer, more efficient, more comfortable, and more accessible. It also might be more intrusive, less private, and subject to new dangers–but that’s what the community is working to figure out now.

Tim: IoT is still the wild west of competing standards in some key areas such as data transmission, location and cross-device communication. How does this hurt users and how do we break out of this cycle?

Jon: I’m not quite as worried about standards as some people are. The market tends to pick unifying standards eventually, and in the meantime a lot of smart people are working on the problems of compatibility and translation so that innovative companies can work at a level of abstraction above where the lack of standards might be a problem. A startup founder has never said to me, “If only someone would come along and give us a standard!”

Tim: A world with a trillion devices will unleash more data than we have ever handled before. What is the biggest challenge in unlocking the advantages of that information? Is there such a thing as too much data?

Jon: Data scientists would probably tell you that the biggest challenge here isn’t amassing huge volumes of data, or even processing it, but asking the right questions and figuring out how to answer them. Neither asking nor answering is obvious in totally new applications like the ones we’re seeing in the Internet of Things.

Tim: There is a tension between the open Internet and the siloing of data inside closed ecosystems such as Apple, Google or Facebook. How do you believe IoT will change this dynamic?

Jon: The siloing that comes with Apple, Google and Facebook is a reasonable trade-off for many consumers and developers who get to use the incredibly powerful platforms that those companies have built, even at the potential cost of openness, cross-compatibility, and privacy. We’ll probably see something similar arise with the IoT, but it’s a completely open field at this point. No company has yet built something irresistibly compelling to a broad swath of consumers and businesses like those companies have in mobile phones, social networks, and messaging.

If consumers demand portable data, I think the companies building IoT applications could deliver it. And consumers might demand portable, private data in the early years of the IoT when everything is fragmented and portability is critical.

Tim: What IoT startup are you most excited about that might change how we live yet few people know about?

Jon: I really like Spark Labs, which makes easy-to-use networking components for hardware. Their latest product, the Electron, offers an incredibly way to add cellular connectivity to any device.

These kinds of tools make it easy to develop new hardware. You don’t need to build an enterprise-scale team of electrical engineers to bring a device to market any more. So while most people probably won’t interact with a Spark product directly, they’ll benefit from the huge explosion of innovative new products that they enable.

Full disclosure: Spark Labs is a portfolio company of O’Reilly AlphaTech Ventures, a sister firm to O’Reilly Media. I’d endorse them regardless, though.

Tim: In your opinion, what established company is getting IoT right and best taking advantage of its potential?

Jon: General Electric has moved quickly and decisively to embrace IoT – in particular, what they call the Industrial Internet. Just as IoT has drawn lots of software companies into the physical world (e.g., Google buying Nest Labs), it has also drawn lots of companies that mostly deal in physical goods into the software world. Software is a key part of the value that they’ll need to offer, and GE has built up a very powerful software capability.

Full disclosure: GE is one of many large companies that sponsor Solid.

Tim: What is your big prediction about how IoT will change in the coming two years?

Jon: I think that in the next two years, the way we talk about IoT will become more focused and its value will become clearer in a variety of areas. The term suffers from an early connection to the idea of the Internet-connected refrigerator and a handful of other things that invited ridicule. Since then, we’ve started to have a more nuanced conversation about what IoT means for commercial and industrial applications. That’ll develop further, and I think we’ll see meaningful progress in what IoT means for consumers, too.

Tim: How is the Solid Conference helping move forward the conversation and catalyzing this technology shift?

Jon: Solid is particularly focused on a couple of elements of this conversation:

The first element is applications for IoT and hardware that are meaningful, impactful, and, for some people, unexpected: things like agriculture, municipal infrastructure and heavy industry. We want to talk about the big, serious things that IoT can enable and steer clear of the consumer-focused side that sometimes preoccupies observers.

The second is recognizing that building an Internet-enabled world will require expertise from lots of different areas, and Solid brings together a community that is, in my co-chair Joi Ito’s term, not just interdisciplinary but “anti-disciplinary.” The boundaries between software, electronics and biology are falling, and people can easily move between disciplines to invent the next great things. The door is open to everyone.