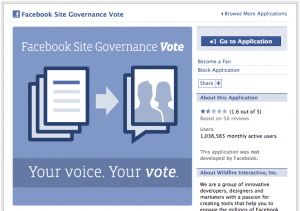 Facebook users were greeted this week upon log-in with an simple, but significant message: “We’ve revised the two new documents we proposed to govern the site, the Facebook Principles and the Statement of Rights and Responsibilities, based on your feedback. Now, we want you to vote for the system of governance you think is best.”

Privacy and portability of data are big friction points for the social network. This open sourcing of their policies is a fairly radical departure from Facebook’s previous “unilaterally change and then reverse after public outcry” approach in a few key areas:

Content Copyright & Usage
Fearing Facebook could legally sell their work under the site’s current copyright policy, photographers, artists and others have demanded they clarify for content uploaded. The proposed document drops the highly inflammatory clause granting Facebook an “irrevocable or perpetual” license to use and specifically states their usage will end when a user deletes their content or account.

Rejection of Creative Commons
Many user content driven sites now employ flexible Creative Commons licenses to allow users to set their own level of protection vs. sharing. Facebook says that using Creative Commons is “feasible in a system with more than 175 million active registered users.” But this seems a cop out given the tough engineering challenges Facebook has surmounted and the fact that Flickr users have licensed 100+ million photos out of 3+ billion photos this way.

Facebook’s solution? Privacy Settings so that only your friends can see a photo and “bright-line rule” banning nudity in all forms, including artwork.

Limits on Social Ads
Facebook has many users and not many customers to keep their servers running. At the same time Mr.Zuckerberg is sitting on a arguably the most detailed database of people in the world – gender, age, political leanings, religion, hobbies, etc. The potential money to be gained from this massive collection of personal information is vast and naturally concerns groups like Center for Digital Democracy.

As you would expect, Facebook is still leaving open its options in this potentially lucrative area. Sharing info with Social Ad buyers remains opt-out by default, rather than opt-in. More worryingly, the proposed document states their belief that the commercial nature of content will always be apparent (tricky marketers? never!) and don’t see the need to “label it as sponsored or commercial.”