South Korea shares land borders with North Korea, as well as overseas borders with Japan to the east and China to the west. The country’s population is approximately 51 million (as of 2015), and one fifth of the people reside in the capital, Seoul. The official language is Korean (writing system: Hangeul) and the official currency is Won (US$1 = 1,096 won in May 2015).

South Korea’s economy grew rapidly in a period called the “Miracle on the Han River” around the end of the 1990s. Today, South Korea’s GDP is USD$1.435 trillion (2015), and the country has a highly export-driven and industrialized economy. A strong focus is placed on producing electronics, automobiles, machinery, petrochemicals, ships and robotics.

Characteristics of the Korean Market

According to The Korea Chamber of Commerce & Industry, South Korea is growing rapidly as a global market, and many international brands have chosen Korea as a destination to expand in Asia. For example, Starbucks entered the Korean market in 1999 as a joint venture partnership with Shinsegae, a South Korean department store franchise that owns and operates several other businesses. Shinsegae helps provide Starbucks’ Korean locations with services such as marketing and product development.

The North Face opened their first Korean store in 1997 and has 270 locations there today. The North Face jacket has become somewhat of a status symbol among South Korean students, and wearers of the jacket can be immediately classified according to the type of jacket they wear. The jackets have become so popular that they are dubbed “the uniform over the uniform,” or “backbreakers,” as a reference to parents breaking their backs to afford the jackets for their children.

See below for a viral North Face Korea video, with 12 million views since it was uploaded eight months ago:

2) High Growth in E-Commerce and Mobile

As the world’s leading information society, South Korea has the best IT and communication infrastructure. They have the world’s fastest internet connection speed, and rank first in e-Government as well as second in the Information and Communication Technologies (ICT) Development Index.

Marshall Porter, Senior Vice President and General Manager of Gilt, mentioned in the March of 2015 that South Korea and China were among the hottest markets for global e-commerce. He added that the high level of e-commerce activity in Korea had been driven in part by the government through lowered duties and tariffs on various product categories. Retail e-commerce sales in South Korea was USD$29.3 billion in 2013, USD$33.11 billion in 2014, and is expected to grow to USD$47.83 billion in 2018.

3) Susceptibility to Trends and Pop Culture

Korean consumers are highly sensitive to fashion trends and fads. We can see examples of this through the influence of pop culture on the social fabric of South Korea and the power of the bandwagon effect in the way people copy one another when it comes to the next big thing.

Trends such as the outdoor clothing boom and the camping boom are great examples of the way people jump on the same trend the moment it happens. Below is a graph showing the climbing popularity of outdoor clothing from 2006 to 2010. 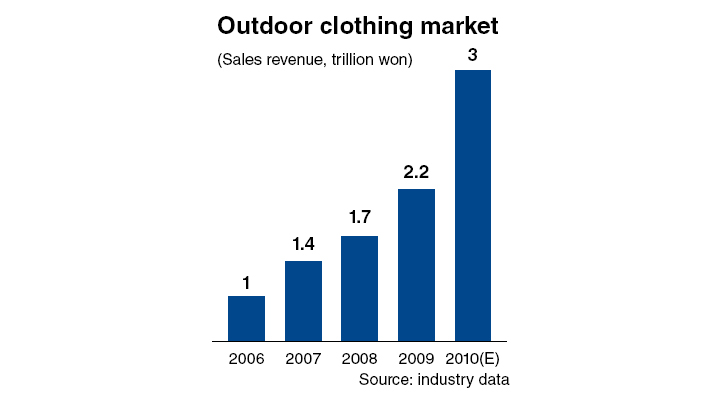 In addition, when popular TV shows end, there is commonly high demand for the clothes, cosmetics and accessories worn by the actors and actresses. When the Korean TV series “My Love from the Star” aired from December 2013 to February 2014, the makeup and clothing worn by the main character sold out across the country.

In late 2014, a snack called “Honey Butter Chips” received a lot of hype in Korea. K-pop stars such as Sooyoung of Girl’s Generation, Siwon of Super Junior and T-ara’s Hyomin began posing in selfies with the snack propped beside them. Demand for Honey Butter Chips exploded and consumers began to upload pictures of the snack on social media as well.

Stores sold out of the snack completely, and some places even put up signs saying they don’t have the snack in stock at the door so people would stop asking. Many stores started to bundle up Honey Butter Chips with other foods to be sold together so people can only purchase it in a set. The product ended up on the international black market selling for exorbitant prices due to extreme demand. On eBay, one auction had a winning bid of USD$103.50 for two 120-gram bags of the chips. The product typically retails for around USD$2.40.

The popularity of North Face and Starbucks shows the Korean consumer’s affinity for international brands, but the most important takeaway is the cultish way trends rise and fall in Korea. This cultural characteristic of Korean consumers drives the way the country manufactures popular celebrities and groups, and ought to be something that brands entering the Korean market should be aware of. The power of influencers and celebrity culture is not to be ignored when it comes to driving demand for products in South Korea.