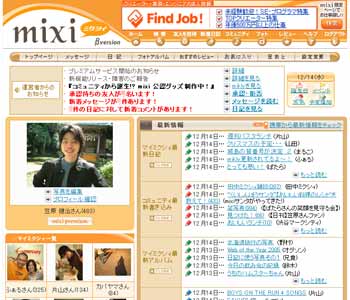 Mixi, which launched in February 2004, is the biggest social networking site in Japan. The process of joining Mixi community starts by inviting friends, then being the part of Mixi community. The users of Mixi can send instant messages to there friends, write in a diary, read and comment on others’ diaries, organize and join communities and invite their friends.

Mixi has enjoyed a steady growth in its userbase. As of May 2008, Mixi had over 10 million users and an 80% share of the social networking market in Japan.