My previous article Why Japanese Companies Struggle With Marketing was meant to provoke. Language, cultural history, education and marketing’s lower status in Japanese companies were identified and explained as reasons why, plus the importance of marketing was established. In this article, I am providing recommendations to Japanese business leaders on how to embrace marketing, especially for companies currently competing (or intending to expand) outside Japan. The Japanese domestic market is totally unique; the way marketing is practiced tactically inside Japan is not likely to work outside Japan.

First, let’s establish a sense of urgency (again) and identify the catalysts of change that are affecting Japanese business direction.

In the late 1940s and 1950s, Japan competed largely on low prices and low wages, selling cheap imitations of Western goods. Understanding the limits of this approach, the nation underwent a stunning transformation to compete not just on price but on quality. The manufacturing practices and approaches that Japan pioneered changed competition throughout the world.

Today, Japan must move beyond just quality competition to competing on strategy and innovation. A quality product is not enough to remain competitive anymore. Genuine innovation not only in products but also in approaches to competing will be required, e.g. marketing.

After two lost decades, in 2014 a number of catalysts of change offer Japan an opportunity to get its mojo back: Abenomics, the 2020 Tokyo Olympics, the pressure of an aging and declining population, and activities of global competitors (especially Korea and China). Japan needs to refocus its formidable strengths on new core business technologies and entrepreneurship.

As I have written before, the CMO function should be incorporated into Japanese companies, but not in the way it is practiced in the USA as the Chief Marketing Officer. Since “CMO” is an abbreviation that universally signals the marketing function in a company, my suggestion is to refine and rename it for a Japanese company as the Consumer Marketing Office.

The CMO: How it works

A team of execs work collaboratively, each responsible for different marketing functions as identified in the chart below. 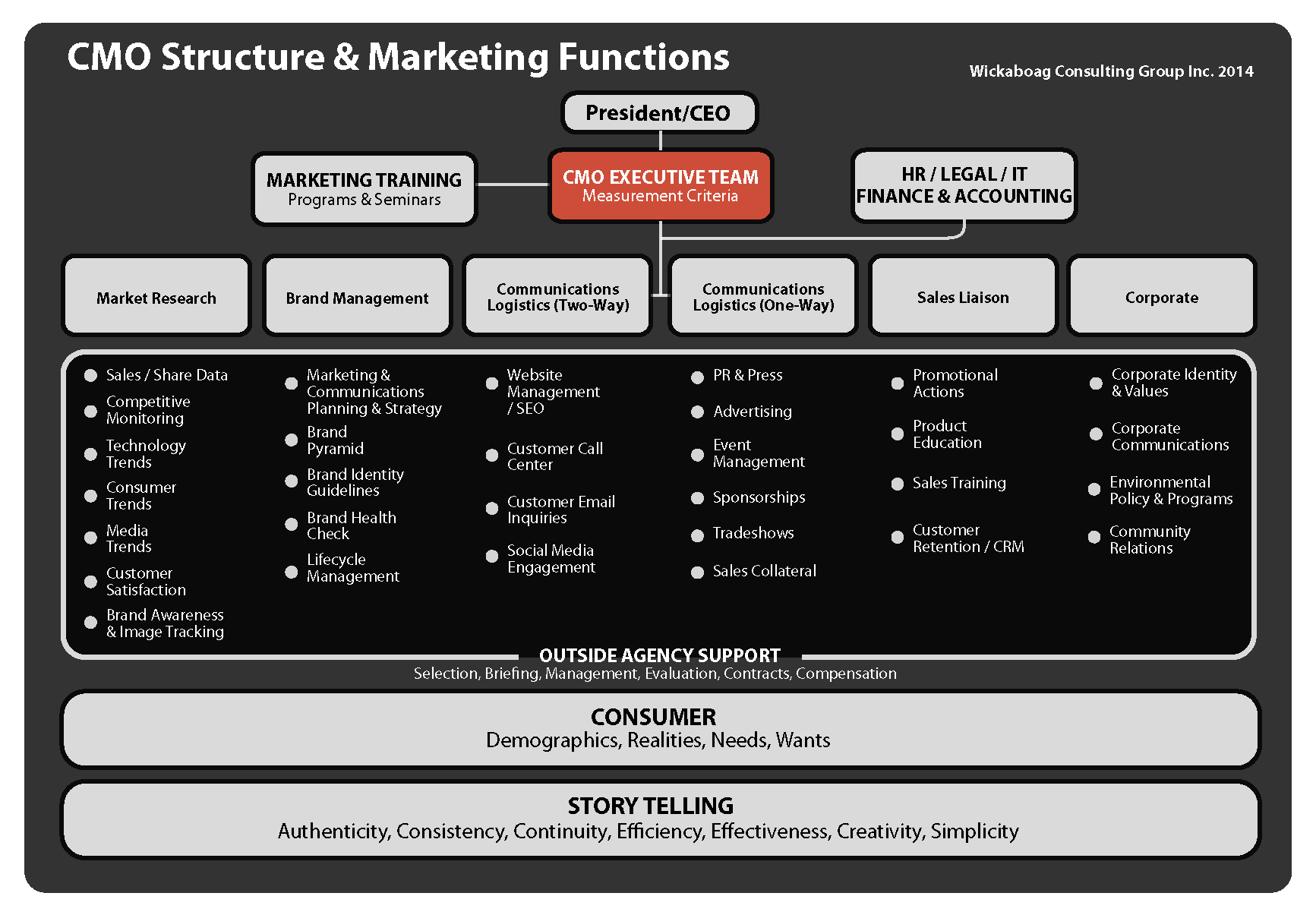 The team has a rotating captain so marketing is not dependent on one “Marketing Superman.”  They act as the voice and representative of the consumer inside the company. They are flexible to respond to rapidly changing competitive challenges and consumer trends supported by specialist outside agency partners. The team establishes KPI’s to measure ROI on marketing expenditure, defines success and defends marketing budget requests.

In addition to a rotating captain, the team has planned rotations for a constant inflow of new thinking, while retaining wisdom and experience. The CMO integrates marketing cross functionally into all company functions as an equal team player, as demonstrated in this chart: 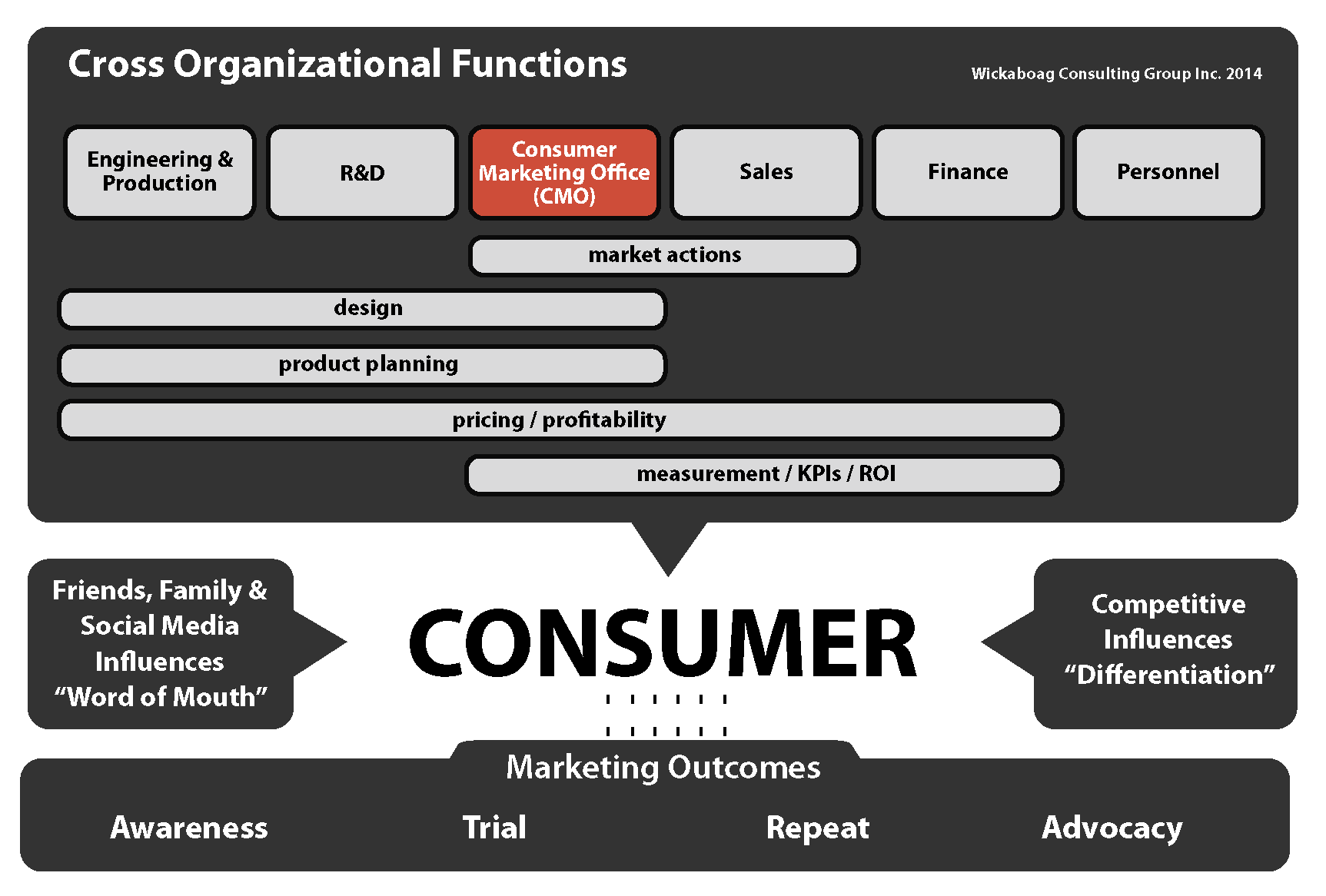 The CMO reports directly to the business owner or CEO. They must be directly involved because, recalling Peter Drucker’s quote, “… Marketing is the distinguishing unique function of the business.”

The CMO: How it benefits Japanese business

The CMO helps maintain or regain innovation leadership by providing the CEO with a platform to motivate and align the company organization behind a clear marketing plan & strategy. It increases the odds to hit sales goals and build market share with better margins, which leads to increasing the value of the company brand(s) in the mind of the consumer and within the financial community. It will help achieve the four outcomes of marketing: 1) Awareness, 2) Trial, 3) Repeat, 4) Advocacy

Eight Recommendations to the CEO

1. Separate sales and marketing into two distinct functions and clarify the role of each
2. Establish the CMO as a new board level function reporting to the CEO
3. Re-arrange the company’s organization and cross functional working processes to build in the CMO function
4. Elevate the status of marketing in the company and allow employees to specialize or develop a career in marketing as a skilled profession (like an engineer)
5. Institute an ongoing marketing recruitment and training program with outside help
6. Treat your outside agencies as partners, not suppliers – they advise, you decide!
7. Implement a process to measure the ROI, effectiveness, efficiency, consistency and continuity of marketing investments and kaizen everything through defining your KPI’s
8. Build in incentives and rewards for the CMO team and outside partners

The Marketing Black Ships are on their way!

Most Japanese are familiar with Commodore Perry and the 1854 arrival of the Black Ships in Shimoda; this led to the first trade agreement between Japan and the USA. It also marked the opening of Japan after 250 years of isolation. Using this symbolism of outside pressure to influence changes in Japan, I invite everyone to envision a fleet of Marketing Black Ships on a mission to motivate Japanese companies to embrace marketing! Competitive threats from global markets are part of the cargo.

And finally, let’s recall William Smith Clark’s parting words of encouragement to his students at Hokkaido University in 1876 (a nationally known motto in Japan): “Boys, Be Ambitious!” Japanese business leaders have to be ambitious, determined and directly involved to implement marketing as a core function of their business.

Marketing is so basic that it cannot be considered as a separate function… It is the whole business seen from the point of view of its final result, that is, from the customer’s point of view.
~ Peter Drucker

Change is never easy, but it is inevitable and necessary. The market is a constantly changing competitive environment. Standing still is not an option. Embrace marketing to achieve KPI’s in markets outside Japan. The next step is up to you to make it happen!