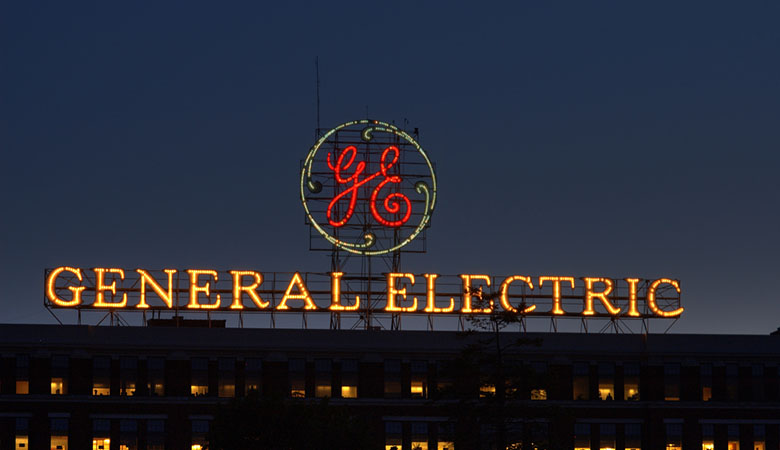 What do you think of when you see the name General Electric (GE)? In the last three years, GE has put a lot of effort into showcasing the company’s technology via visual content on digital platforms. This includes launching an Instagram and Tumblr account, refreshing their YouTube channel, and giving their website, GE.com, a makeover. 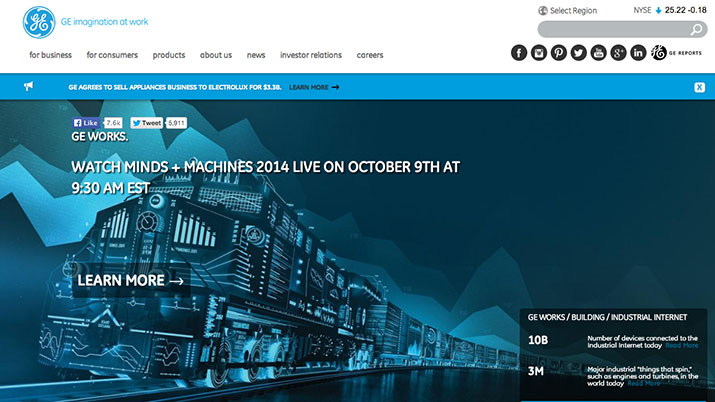 Before deciding on what actions to take, a brand needs to figure out what the goal of their digital marketing strategy is. GE had three goals:

After defining the overarching goals, GE needs to figure out how to achieve them by establishing their target, objective and strategy to reach their audience. What is the brand messaging and how are they going to convey that to the audience they want to target through digital marketing? Below is how GE defines their voice.

Enthusiasts with interests in topics important to GE. This can mean bloggers, people who are simply interested, or people who work in relevant industries.

Deepen the target audience’s understanding of GE’s commitment to a better future through technology and innovation.

Ignite light-hearted curiosity around science and technology and create moments of wonder by opening GE’s doors. The more their target audience gets to see and understand what GE is doing, the more they have the opportunity to like or even love the brand.

GE is on a lot of social platforms. Part of their digital strategy is to try to be first-movers on many platforms to test out whether or not it is suited to the brand. Instagram is one of the first platforms they experimented on and they came back with highly successful results. 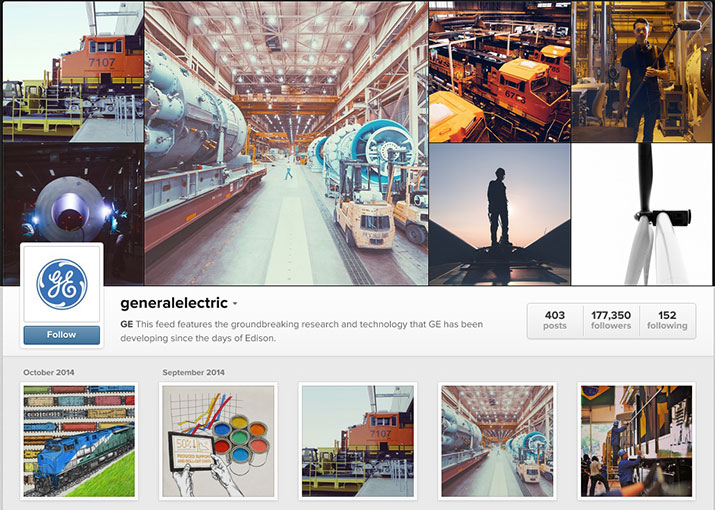 Their digital strategy can be summarized in the following marketing brief:

“Highlight GE’s technology in a fun and engaging way by using new platforms and pivoting off of cultural trends. Using instagram filters and our staging to create a steampunk aesthetic, we’ll highlight GE’s latest innovations as technology enthusiasts may have imagined them in the past.”

As Katrina states in her presentation, the important rule for visual storytelling at GE is:

Not lunch rooms, not whiteboards.

Below are two examples of how GE approached their digital campaigns.

One of GE’s Instagram campaigns was called #GEInstawalk. The inspiration behind this was: while the digital team was shooting photographs of their factories with professional photographers for social media, they thought, “What if we could invite people into these shoots?” 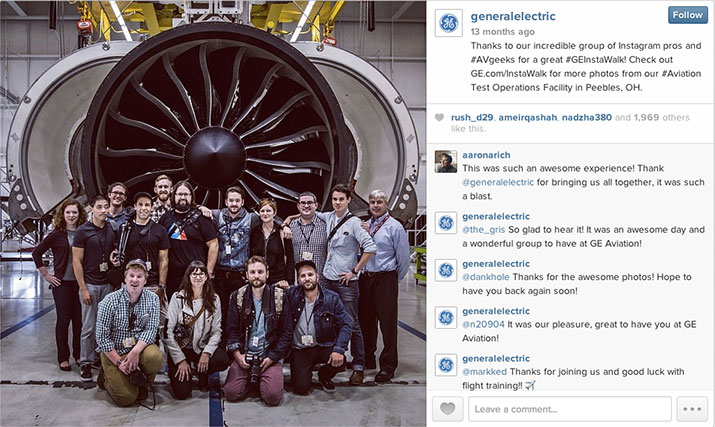 As a result, the company invited six Instagram influencers and six GE super fans to take a special tour of the jet engine test facility in Peebles, OH. They encouraged the guests to take photos of their experience and post it on Instagram. The results were highly successful–they received:

The reason for this success is simple: give 12 people an experience they’ll never forget, and it stays with them for a very long time.  This pays off for the brand in the long run. Generating positive experiences among young people right now will impact GE favorably in the future. When these people and their network grow older, they can potentially become either new hires or shareholders of the company–both long term goals of the marketing strategy.

Below is one of the photos taken by the 12 people invited to the facility. You can view the entire collection on GE’s website here. 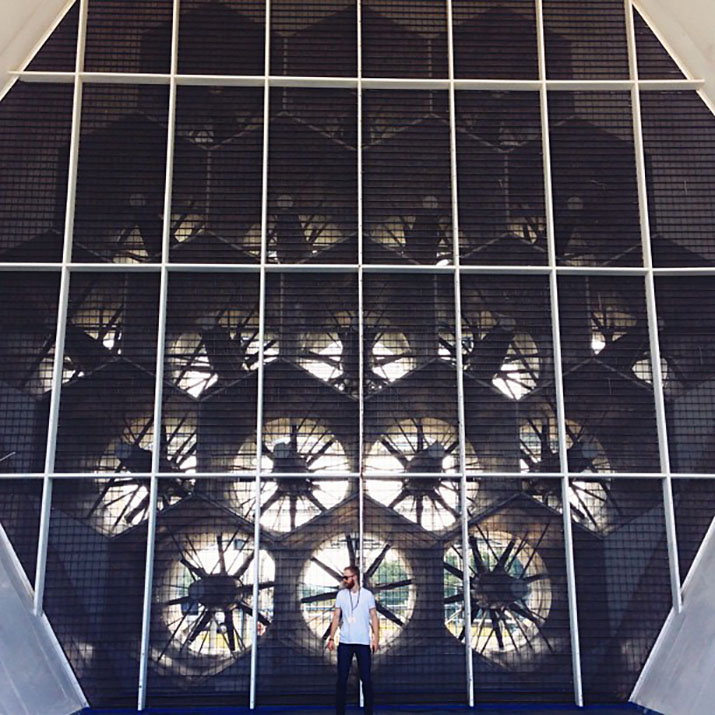 During the Spring Break of 2014, GE made a new viral video campaign to celebrate the innovations in materials science.

The company asked their followers to send them requests through social media for things to crush using their machines. They then ran everyday items through destructive test labs, deploying 78 content assets over two days. The results of the campaign were as follows:

One of the most important factors to getting quality engagement – in particular, getting fans to actually send in requests – is to ensure that everybody who asked to crush something got a response. When people see they can actually get real responses and potentially see their request fulfilled, they become more willing to engage.

Again, this campaign focuses on generating positive experiences for people and giving them a new perspective on GE as a company. This kind of campaign has both short term and long term benefits as it generates engagement now, but strong branding for the future.

The biggest lesson learned here is the importance of finding the right digital voice for your brand. The success of GE’s digital strategy can be attributed to finding the sweet spot between the company’s core values and expressing that in a visually appealing and relevant way.

GE targeted the right audience – people who were already interested in technology and the company – with the right message using the most suitable platforms. As a result, they were able to garner significant engagement among their target and increase awareness of the brand among young people. 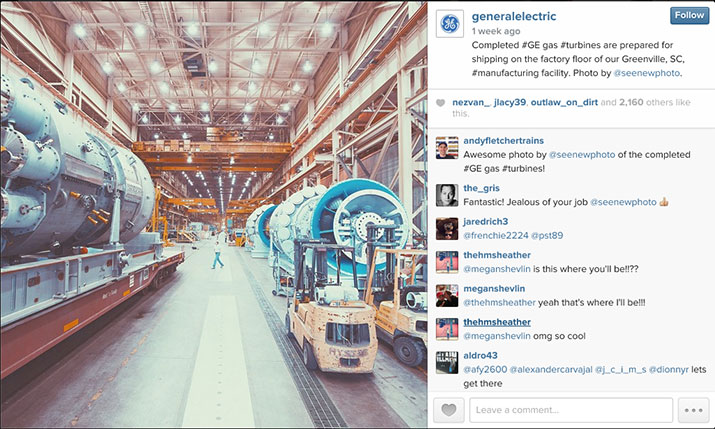 However, that’s not the end of the campaign. Digital marketing is ongoing and the goals are long-sighted. GE aren’t planning for the next year or two, but for the next 20 years and beyond as they consider their aging shareholder base.

Companies that want to maintain a strong foothold in their industry should exercise this kind of big picture thinking as they map out their marketing objectives. Why are we engaging young people now? What kind of impact will this positive experience have in the future?